Can-Am, or the Canadian American Challenge Cup, was one of the most charismatic racing series that ever existed. The rules were relaxed, power was virtually unlimited, and all the cars had unique and memorable shapes, perhaps best illustrated by the wonderful Chaparrals. McLaren was the most successful Can Am manufacturer of all time, winning the championship five times. Their secret was simply preparation. They conducted extensive tests and shakedown runs and utterly dominated the competition, who would often finalize their setups on the day of the race. McLaren yearned for a stronger competitor, someone to truly test their mettle. They should’ve been careful making that wish, because soon Porsche joined the fold and took over, until the Porsche 917/30-Mark Donohue pairing was lapping whole 2 seconds faster than anything else on the field. None of the other manufacturers, including McLaren, could keep up. This, paired with an increasing number of stringent rules, resulted in a lot of manufacturers leaving the series, until in 1975 it was cancelled altogether. 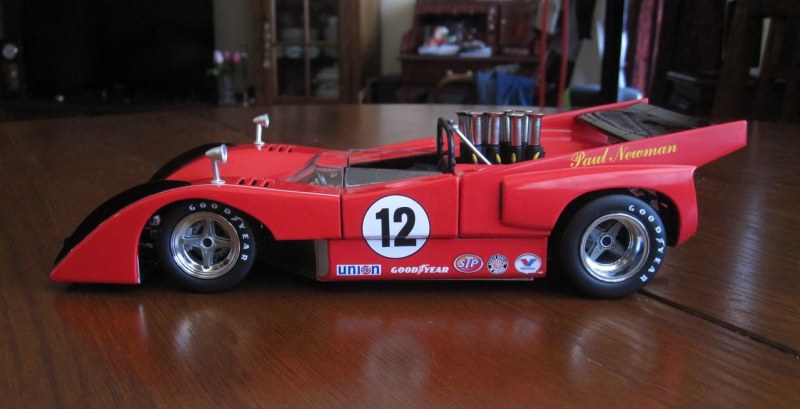 This model by TSM, the 1971 McLaren M8D, was the result of a newly imposed rule that outlawed strut-mounted hi-rise wings. Before I render any judgment, however, keep in mind that this model is quite affordable, and can be had for well under $150 CDN.

The paint is smooth and consistent on the flanks and the wheelarches, but the centre of the front clam shell and most of the rear clam shell have the slightest orange peel effect. It is, of course, unnoticeable unless examined up close. The white stripes outlining the edges of the front clam shell are decals that are haphazardly aligned, probably due to the inherent lack of flexibility of the decal and not due to carelessness. The decals on this model are quite sparse, so it is a non-issue. 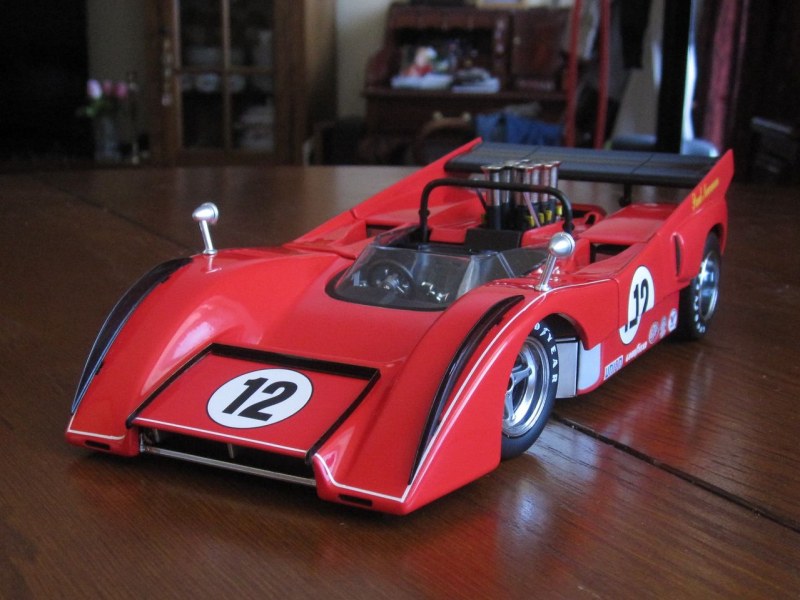 The model itself is quite heavy, which I like. Unfortunately, the front clam shell is not removable, which is strange, considering these are based on the old GMP molds, which have opening front compartments. There are nice photo-etched details, such as the front radiator and the two in the rear by the engine. Speaking of the engine, there is a fair amount of detail seen considering the price, with some intricate orange and clear tubing, and those lovely  trumpets that sit at a distinctive slant. 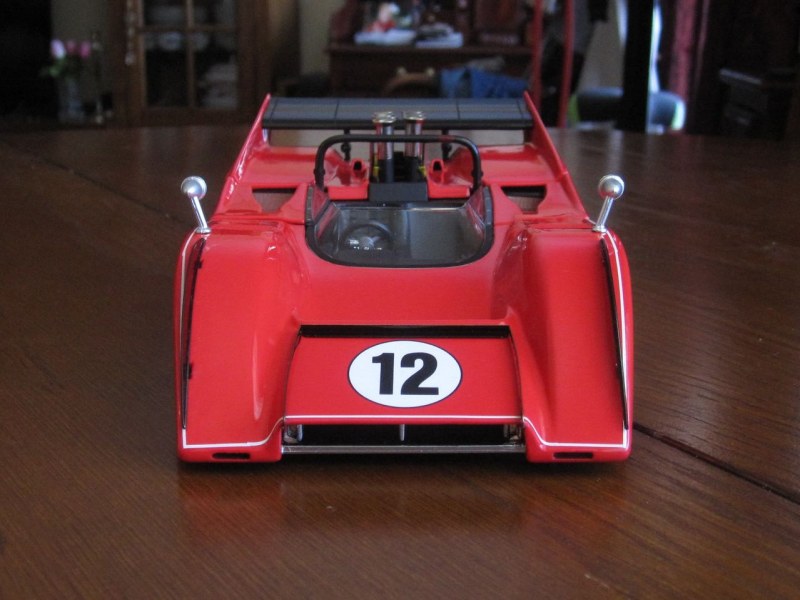 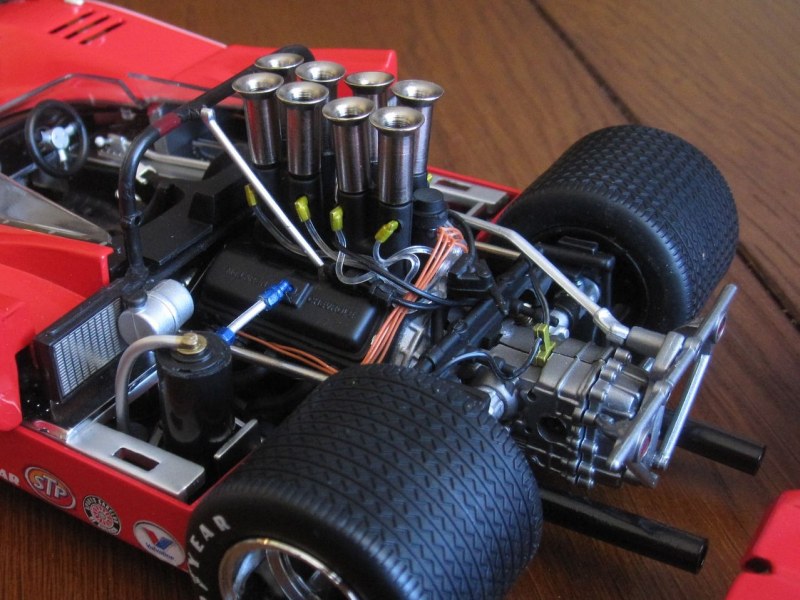 There is a lot of plastic utilized in the model, so it is fair to say that most of the weight comes from the metallic body panels. The suspension detail includes springs and various bits of support, while there are movable joints on the driveshaft, which is nice. Mine don’t rotate with the wheels all that well though.

The cockpit has minimal detail, with most of the bits cast in plastic. The gauges are hidden so far away that I needed a flashlight to see them while holding the model at an angle. Even so, they are there and legible, which is a very nice touch. The seat is made of flexible rubber and the seat-belts are fabric. 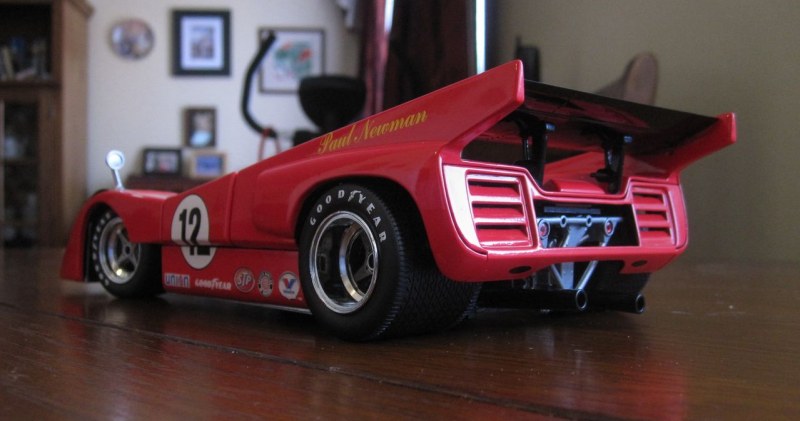 The rear tires are disappointing. They are made of hard plastic, while the wheels and brakes aren’t very impressive either. The front of the car sports brake cooling hoses and springs, but not much else is visible. Curiously enough, the front tires are made of soft rubber.

The only real flaw I can detect with my model is that the doors have a life of their own. They move around a little too much and it’s difficult to sit them properly and have them stay that way. At a glance, therefore, this model is great. When you start to examine it with a fine-toothed comb, it’s easy to see all the cost-cutting measures, but then you remember the price you paid for it and the fact that there is no other manufacturer currently out there that makes Can-Am cars, and you can’t help but like it. It’s a must-have for all Can-Am fans, and considering the price, it’s a damn good deal as well. 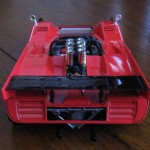 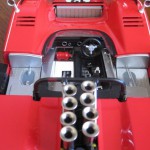 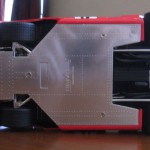 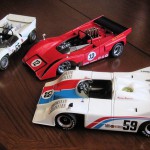