If Jan Hammer´s Miami Vice theme is just now playing inside your head to pictures of swaying palm trees, flamingos, bikini girls, boats and a surfer bending over backwards to dip his head in the water, then you were alive in the mid-1980s and this model works. You can skip the next paragraph, … pal.

This model very recognizably is the 365/4 GTB convertible from THE trend-setting 1980s TV series, featuring all the fashion, pop music (e.g. Phil Collins), new acting talents (like Bruce Willis) and supercars. How do we know, though KK Models don´t mention Miami Vice anywhere, neither on the box of the car nor on the boxes of the figurines (to be purchased separately) that so clearly represent Miami under-cover-cop Sonny Crockett alias Burnett and his partner Ricardo Tubbs? Well, because the car and the figurines speak volumes, the car being unique spec, the figures dressed and in their unmistakable poster-pose, pressing the right buttons. Why not mention the franchise then? Because the items are probably not licensed to bear the Miami Vice name, I suppose, and, more importantly, there always was a slight problem with the car. Fictionally, Sonny´s car was a real Ferrari when in reality it was a replica based on a Corvette – a fact that Ferrari never liked much: an influential lifestyle TV series featuring a fake Ferrari! Ferrari was so cross that they donated the Testarossa (reviewed earlier on DiecastSociety.com) on condition the Daytona replica officially vanished from the screen for good. It did so spectacularly when Burnett doubted that the Stinger missiles he buys off a weapons dealer “really go bang”. Bang the demonstrator went, as requested, and with it the Daytona. 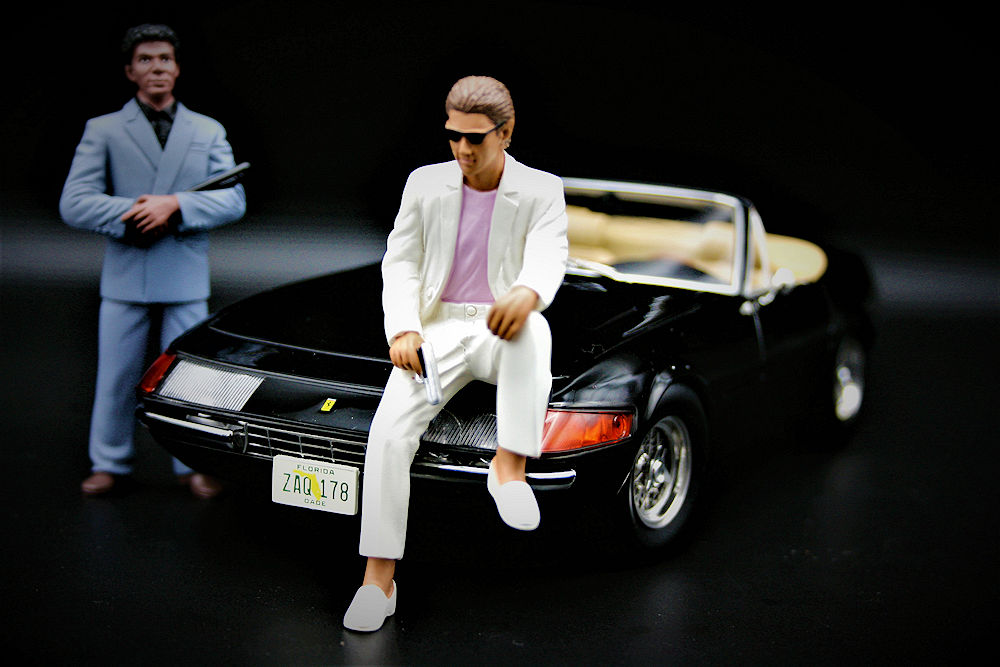 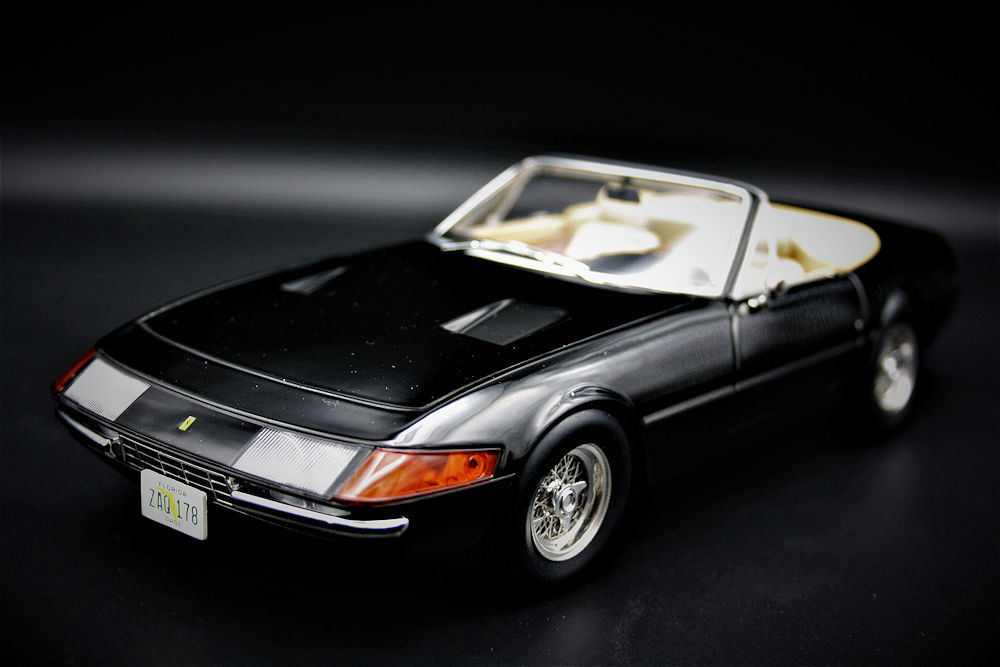 So, to avoid all kinds of trouble, KK Models simply name this black version of their Daytona convertible, alternatively sold in other colours and on different wheels, the 365 GTS/4 1969, give it a Ferrari badge on the sealed hood, on the steering wheel and a Ferrari script on the sealed trunk. The amber wrap-around side-markers up front bear a tiny black prancing horse, facing against the direction of travel, which is correct on the passenger side but seems inverted on the driver´s side. The very good headlamps are not flip-up on this version but are half covered by clear rectangular lenses closing the gap in the slanting front body. The rear lights are surprisingly articulate in that they show projectors and lightbulbs underneath the coloured lenses, with amber on the outside and red on the inside, when they´d need to be the other way round. The other thing missing for a US-spec is the red rectangular side-markers aft. A white reversing light sits in a not so cleanly cut chrome housing, but the four chrome exhaust tips are very crisp and deeply hollowed. The finely wired wheels and the correct Florida registration help to send the right message: This black beauty is unmistakably the Crockett rocket. 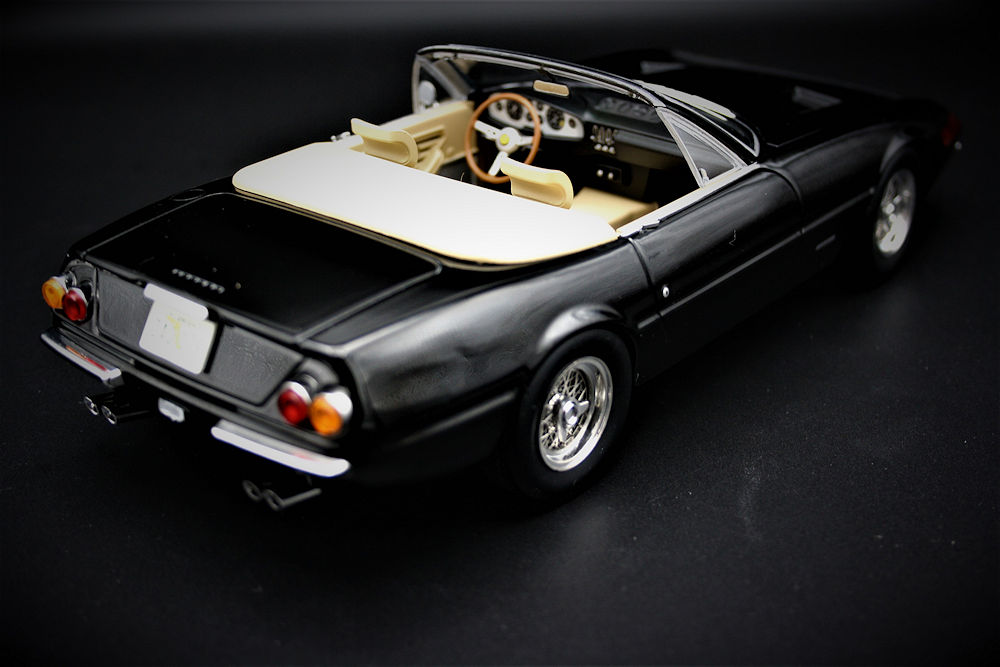 Paint is applied smoothly and black is a merciful colour on a sealed model in terms of panel and door gaps, no complaints here. The front wheels are posable, all touch the ground, but as usual with KK, none of them rotate all too willingly, as if someone was standing on the brakes, speaking of which, represented visibly through the wire spokes as a simple silver disc with moulded-in calipers. Inspecting the wheel assembly more closely, you notice that the wire-spokes and center spinners don´t spin, the outer rims and tires rotate around the stationary metal plate of spokes and brakes because the rims sit so steady on the axles that the glued-on outer rim section with its tires comes loose. Not great engineering, but acceptable for a static display model. 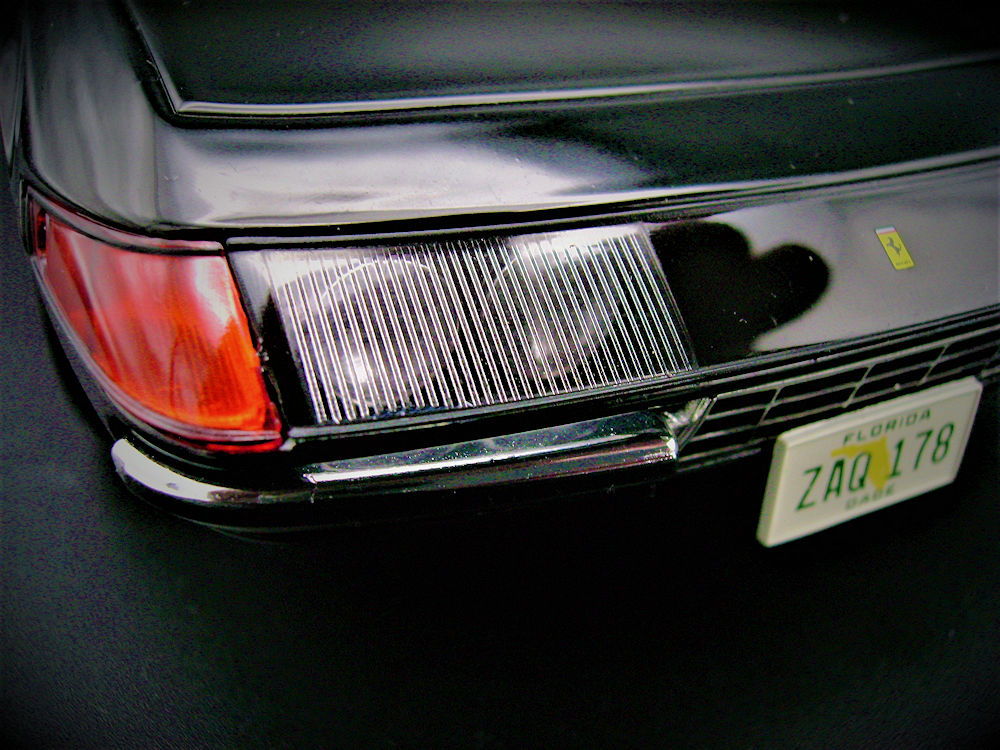 The interior is surprisingly good with nicely detailed gauges and switches on par with much more expensive models. The cream seats with black accents are nicely textured with a convincing depth, the same for the door panels. Gear lever and handbrake are very delicate and painted in silver and black. The silver is of course too flat to represent chrome and the wood on the steering wheel´s rim is simply brown with no veneer visible, but it does have two holes in each spoke and stalks fitted on either side of the steering column. The pedal box in the driver´s and elevated footrest in the passenger´s footwell isn´t bad either. Both the door and the rearview mirrors plus the windshield wipers are surprisingly delicate for something in this price category. KK has not missed the triangular door windows, the handles and the door locks either. 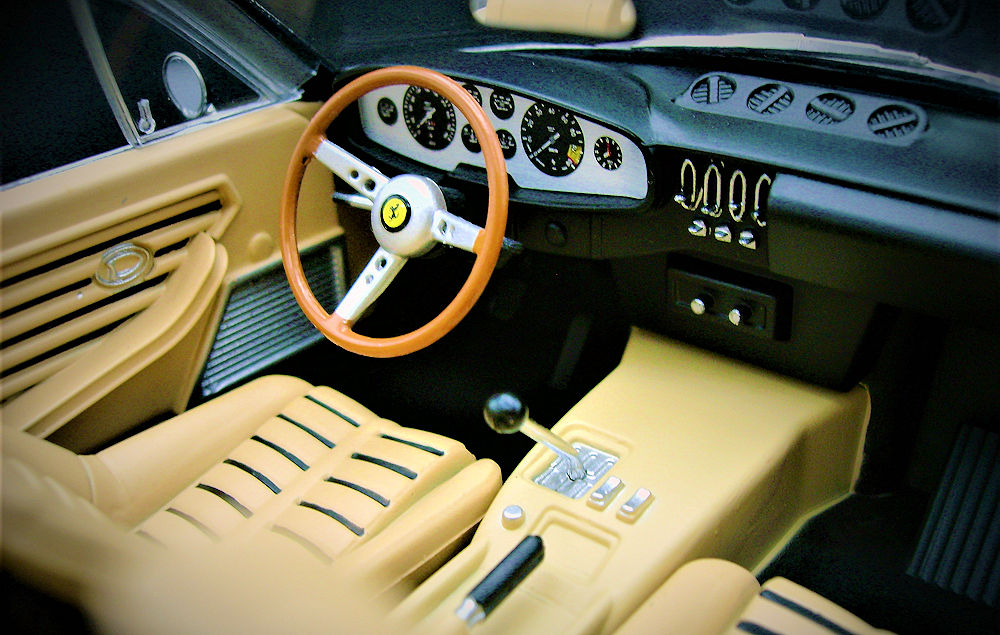 Now, I have to say, this is a surprisingly good model and a lot of (non-Stinger-) bang for the buck, so much better than the Testarossa. The figurines are not bad, though a little expensive at about American Diorama quality. Sitting Sonny is clearly purpose-made to sit on the hood and rest his right heel on the bumper of this model. And although his sunglasses, hair and flashy gun aren´t that convincing, this Sonny is to be much preferred to the standing one whose clothes look all too baggy and his hands form a somewhat strange gesture of holding something invisible. Tubbs with his sawed-off shotgun is the better figurine overall. But both figurines seem a must when you buy this much-recommended model. If ever, a better model will probably only be done by CMC, although I don´t think they´d care much to make this TV hero. More likely, a better Crockett and Tubbs team will be done by Scale Figures at some point. They have cared to make other movie characters like the Beverly Hills Cop Axel Foley, Marty McFly and Doc Brown from Back to the Future, characters from video game GTA and these cops may well follow at some point like so many others.