It is no secret that the crossover segment is now the default marketplace in the automotive industry. No, Ford, the EcoSport is not an SUV. It is merely a tall hatchback, period. Suffice to say, the sedan market share is shrinking rapidly. Ford announced that all ‘traditional’ cars will be phased out except for the Mustang. Oh, and do you know what trend is gone too? Naming models based on the animal kingdom…

The Falcon was originally based on its North American cousin. Starting from the third generation onwards, the Falcon was completely designed, developed and built down under, phasing out the American influences of its predecessors. Aussie Aussie Aussie, Oi Oi Oi!

This is the first instalment of a review trilogy which will cover 3 Australia Ford Falcons; one already in my possession, another expecting a release soon and the other one to be pre-ordered. The one which I currently possess is a 1971 XY Falcon GT-HO Phase III. A bonkers name for a bonkers ‘family’ sedan.

The XY was the fourth and final iteration of the second generation Aussie Falcon. This gen-2 Falcon spanned between 1966 and 1972 covering the XR, XT, XW and XY series. In 1971, the GT-HO Phase III was released as a homologation special for the Australian Touring Car Championship. Only 300 were produced and it is believed that fewer than 100 are still in existence. 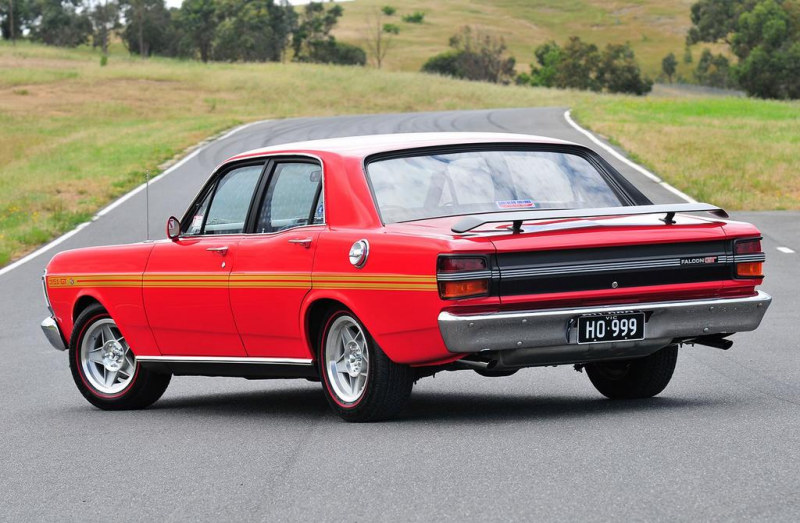 In June 2007, a Phase III was sold for A$ 750,000 in auction which set a then-new record. Fast forward to June 2018, a record A$ 1.03 million was paid for another Falcon GT-HO Phase III with the provenance of once owned by Australian cricketer Jeff “Thommo” Thomson. 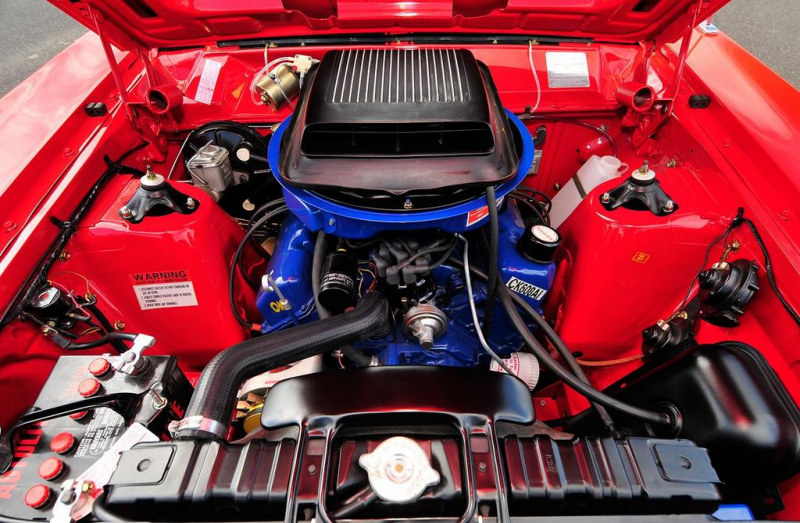 At the heart of this brawny bird is a 351 Cleveland V8 rated at circa 300 bhp and 380 lb-ft. Transmission is via a 4-speed Toploader. The Cleveland block is related to its American counterpart but was locally forged. 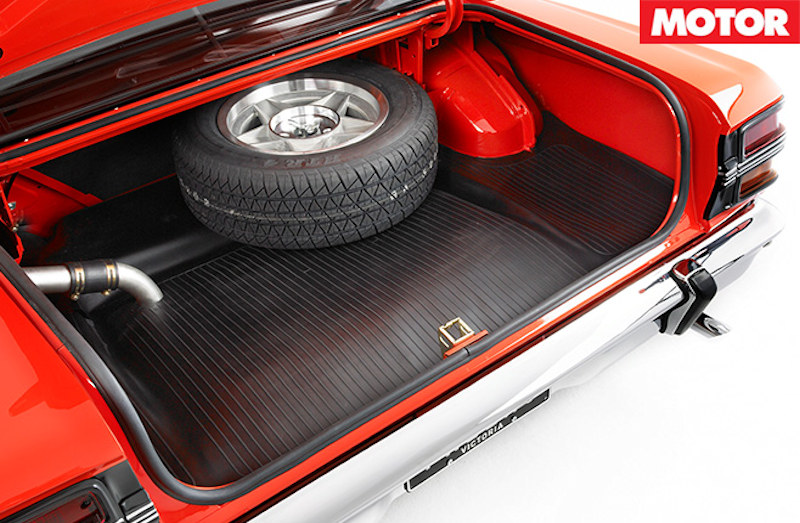 How does a Ford Falcon show up in my collection? A few years prior, I had no idea Australian Falcons existed until Hot Wheels released the XB coupe. Since then I have developed more interest in the Australian muscle car scene with its Ford versus Holden rivalry. Being a Ford person, naturally, I am more inclined towards the Blue Oval range. One more thing, these performance machines are right-hand-drive. If I had the means and some deep pockets, I would love to scratch my muscle car itch by getting one of these. 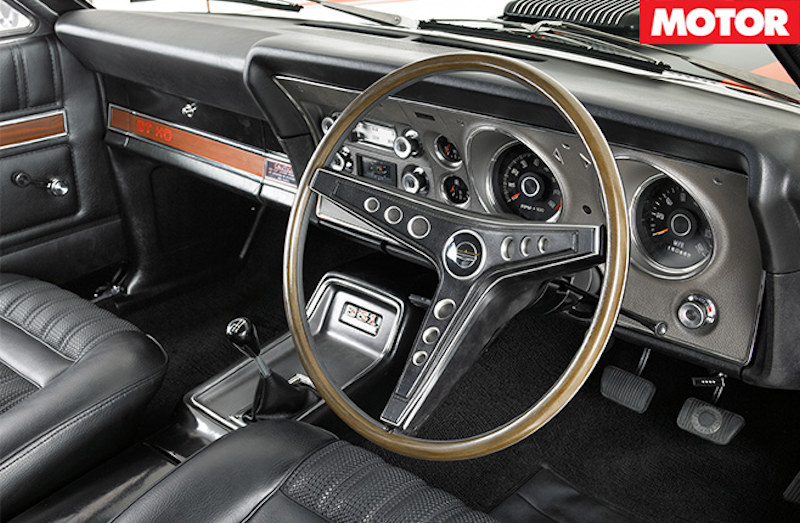 On October 2016, the final Ford Falcon rolled out of the production line following Ford’s decision to end all local productions.

And with this brief introduction done for, I switch over to the scaled-down replica. 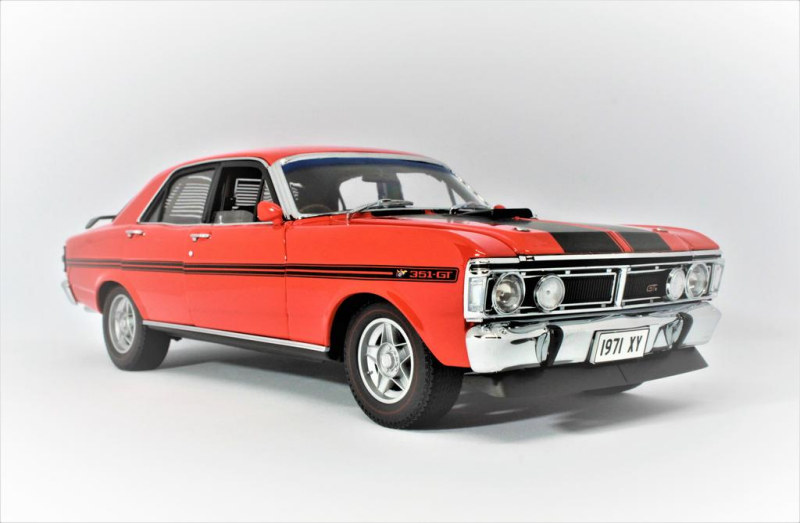 My desire to collect some Falcons in 1:18 scale diecast led me to the discovery of 2 Australian brands; Biante and Classic Carlectables. I chose the latter because Vermillion Fire was available for pre-order at the time and I thought they did a better job on the headlights compared to Biante. There are no ugly injection runners or spruces visible on the headlights, unlike on Biante’s offering in the exact same specifications. Also, since I am already building up my Mustang fleet, I prefer my Falcons to be strictly 4-door sedans only, just for some added variety. 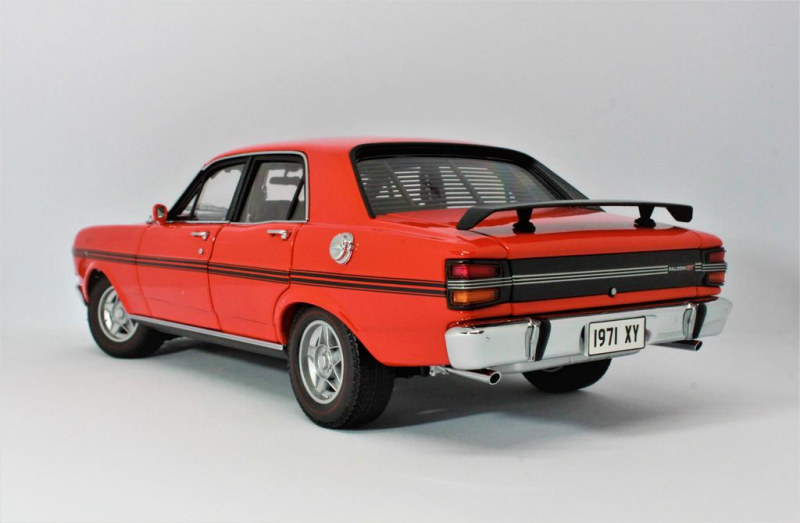 First impressions were generally positive as this was my first experience ordering a Classic Carlectables from an Australian hobby store. It will not be the last. From the marketing pictures released, I knew this piece will be a delight with many details to savour. What I did not prepare myself for was how heavy it felt. This Ford XY Falcon GT-HO Phase III came in at a measured 1,076 grams (~38 ounces), making this the second heaviest model in my collection. Mind you, most AUTOarts nowadays may not even reach 850 grams (~30 ounces).

Generally, I do not judge how shiny or glossy the paintwork should be so long as there are no quality issues. Happy to report that there are no major issues visible. The stance is also great and I do like vintage cars with quad headlights because they just look so characterful and menacing (Fiat Dino coupe anyone?). 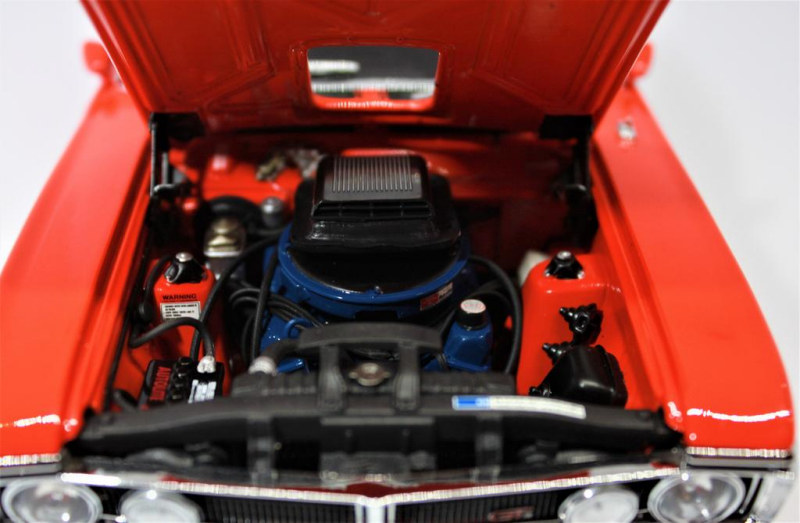 Pop up the hood and your first impression is on how nice the hinges are. They feel well engineered and built. The engine bay is also nicely detailed especially with the colours visible. For my piece though certain areas appeared to be assembled rather clumsily with some visible adhesive residue but only if you look hard enough. Some of the factory sheets are printed with legible words which my poor photography is not able to show. The major issue here is when the hood is shut it does not align properly with the side fenders which suggests a rather poor fitment.

On a more positive note, you get the impression that all the major components were individually moulded and painted then assembled. This is why I enjoy collecting vintage cars because the engine bay is where you can really judge the quality of the design, even though you may not open the hood while in the display. 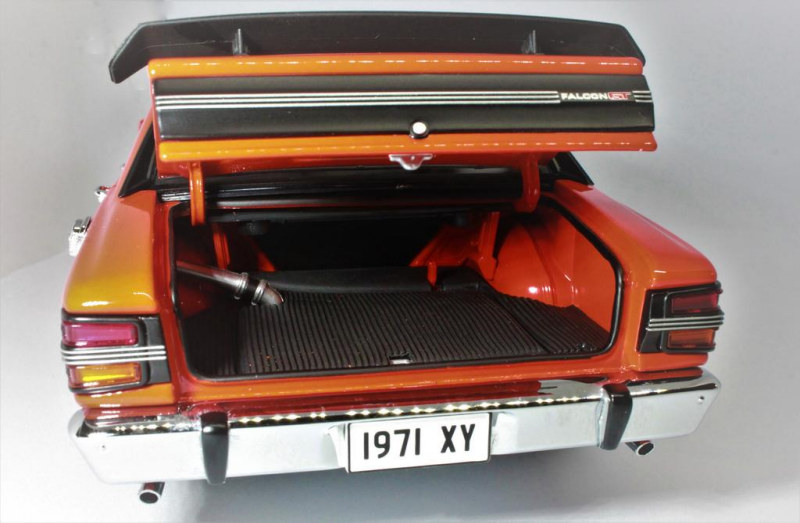 At the back, you get a fully rubber-floor-matted trunk space. The excitement is dialled down a little when you realize these cars came with a full tire and wheel spare. 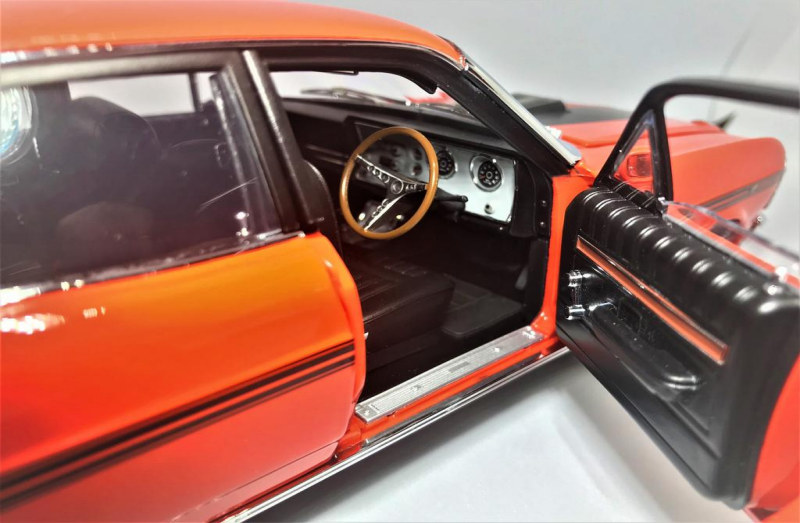 Step into the driver’s seat and feast your eyes on the wood-rimmed steering wheel plus a full set of dash instrumentation. The gauges are done well with the details readable. Opening the doors can be tricky due to how sturdy the hinges are but the model comes with a plastic pick to aid in your ‘access’. 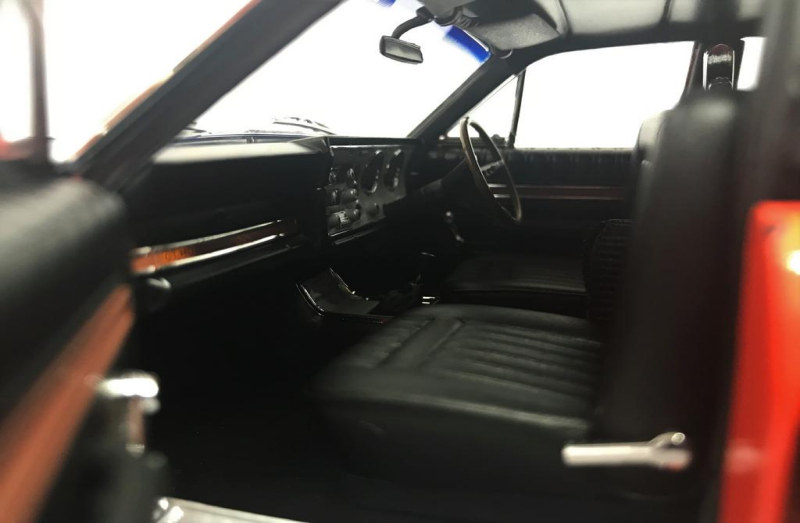 One thing I noticed was the absence of air-conditioning vents and it does appear that the actual vehicles did not come with such thermal comfort features. The seats here are moulded well and they look like miniaturized vinyl pieces instead of cheap plastic chunks. Gives you an idea your pet hamster might enjoy seating inside. 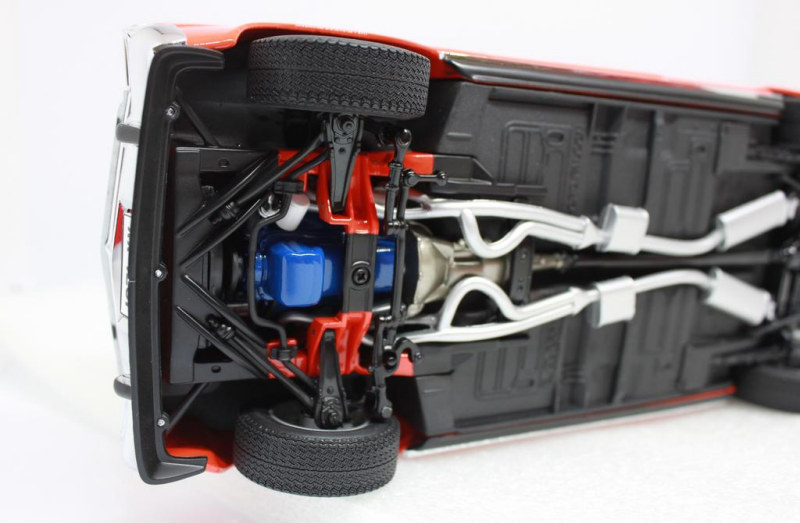 The attention to detail extends all the way down to the undercarriage. The suspension assembly is a real treat and you also get to see part of the engine bay detailing.

Moving to the rear, things remain consistently good where you have the leaf-sprung suspension in full view plus detailing to the exhaust system and fuel tank. A breath of fresh air as more brands now resort to a fully enclosed and planar undercarriage. 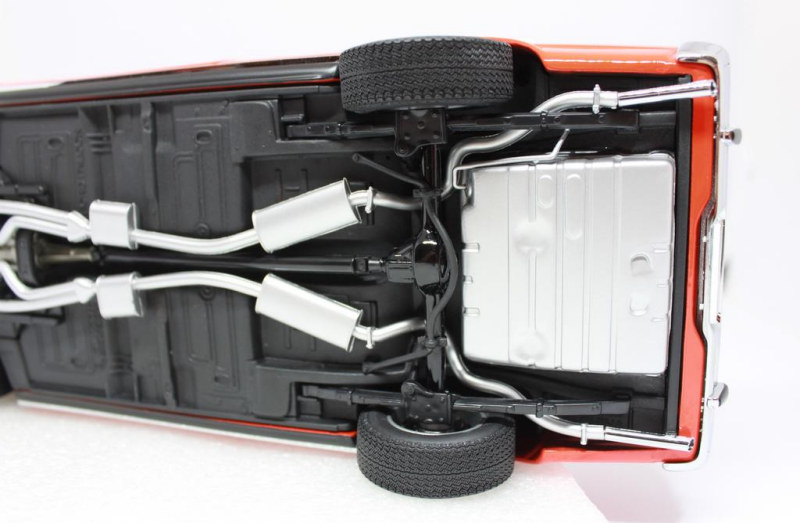 One reason why you should collect 4-door sedans is this. I don’t need a Pagani or Koenigsegg for that matter, this tick all the boxes for me. (Probably should have opened the hood and trunk while taking this picture…)

A V8-powered 4-door sedan with superb detailing plus full accessibility at a very reasonable price. This is a fair dinkum model marvel. 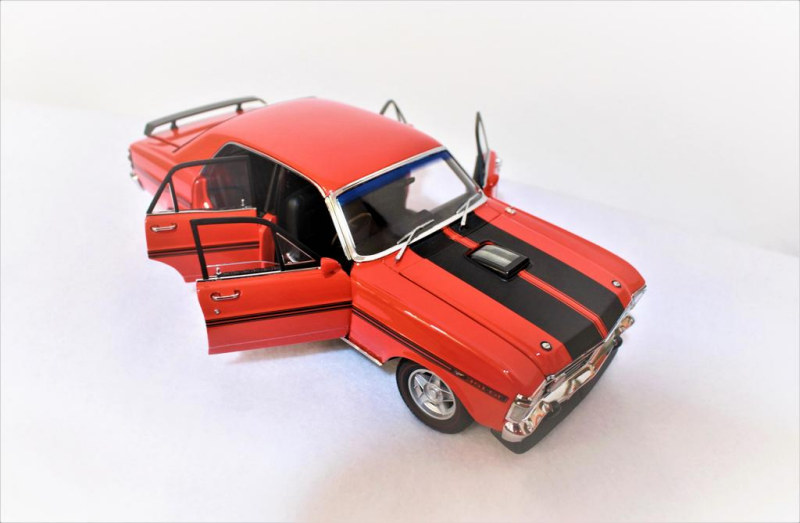 The black stripes running across the side contain both the “351 GT” callout and a kangaroo caricature, pretty much like the Plymouth Road Runner. The question is not whether you should add this in your collection but which colour to opt for. Currently, there are Yellow Glow, Electric Blue, Monza Green, Nugget Gold, Track Red and soon Royal Umber. Honestly, I do not think you can go wrong with any colour though I prefer my muscle cars to be more vibrant visually.

I bought this digital scale from a baking shop for the sole purpose of measuring each and every model. The missus was not amused at first but she was placated when I told her I got free butter for my purchase. 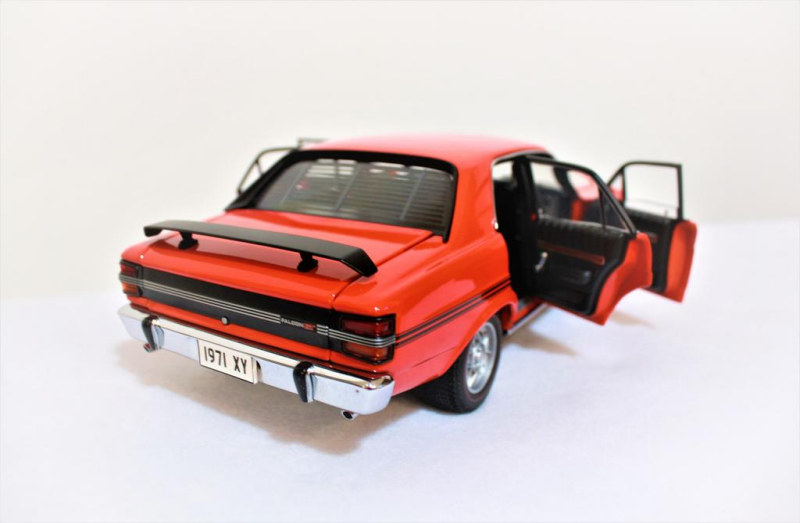 To wrap this up, I am pleased that I bought this and am certainly looking forward to adding more Falcons to my Mustangs. Quite a group of animals there.

However, all these positives do not detract from some noticeable flaws in the final product. I did mention that the general paintwork is fine but there are some paint-transfer evident on top of the grille where the hood shuts in place. My front chin spoiler has some visible glue residue and the attachment could have been done better. Not having the full spare in the trunk is rather unsatisfying but the rubber mats are a nice touch. Overall, this is a very solid piece that just misses some dash of refinement if you probe hard enough.

If you are looking for a classic V8-powered sedan. Give this a look.  Thank you for reading.

4 Responses to "The Ford Falcon Trilogy"