The Aston Martin DBS badge is usually the slightly sportier version of the respective DB generation. The last DBS (famously driven … and crashed … both times by Daniel Craig in “Casino Royale” and “Quantum of Solace” a Bond generation ago) remained rather close to its DB9 platform. AUTOart unfortunately never made it and Auto World´s rather recent rendition is no substitute to speak of. 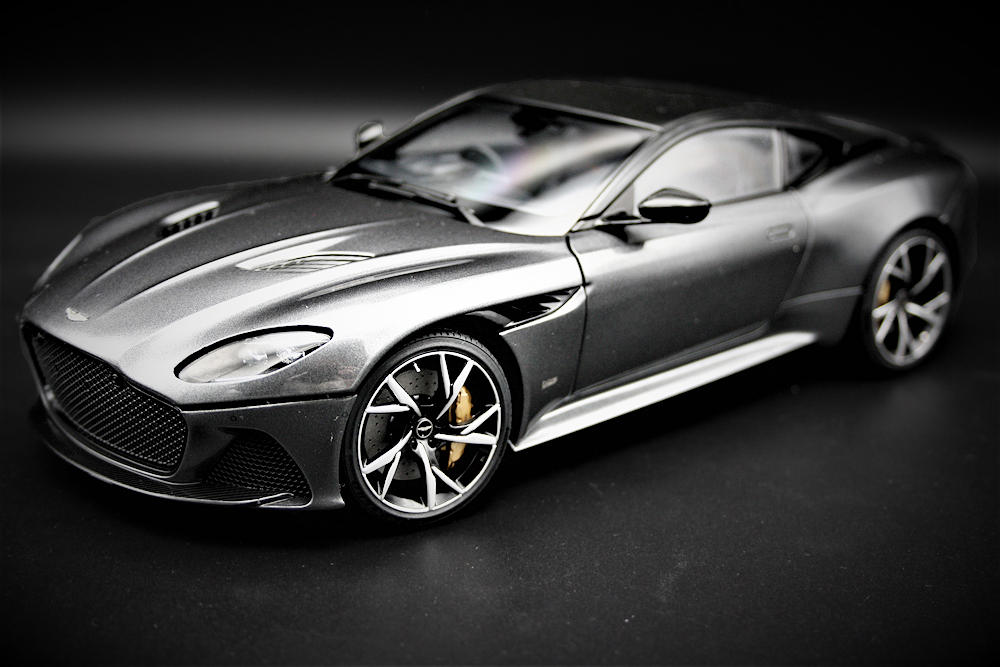 The current DBS Superleggera may be based on the DB11 (and funnily comes in AUTOart´s DB11 Styrofoam shell), but is rightfully nicknamed “brute in a suit”, with a far more aggressive outward appearance, “a dark menacing shadow of brutal, unequivocal strength.[…] Aggressive, yet beautiful”, as the brochure puts it. This is particularly well conveyed in this Magnetic Silver exterior that makes my photos look like from a film-noir thriller, amplifying shape over colour. It underlines how well AUTOart has captured Aston Martin´s “aerodynamic masterpiece, commanding and exploiting the air flowing over its surfaces. It bends it to its will, splits and curves it, attracts and repels it according to its need.”(again, the brochure´s words, not mine), so that you almost see the airflow in the model´s sculpting. 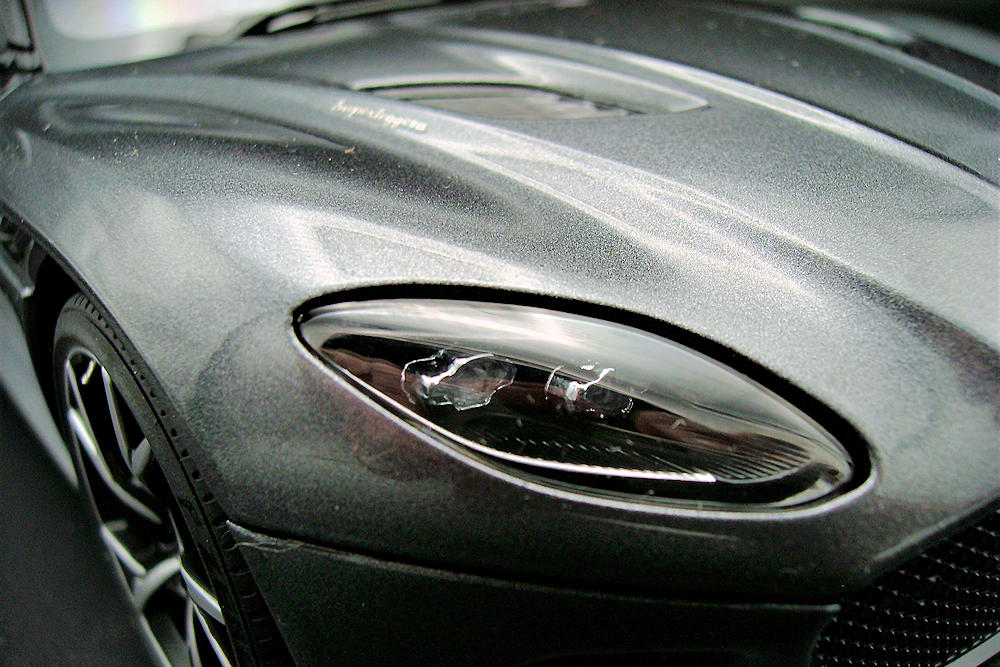 AUTOart´s DBS shares most of the good points of their DB11: The  brilliant LED-headlights´ projectors are apparently directly carried over from the DB11. That the hood not only opens. but, more admirably, shuts into a perfect fit around the headlights and to the rest of the body with shut-lines as tight as the panel gaps of parts that do not move apart, is exactly what LCD has not managed to achieve (so far) and is probably AUTOart´s most outstanding achievement that the DB11 also had. Creases on the hood are razor-sharp, adorned with photo-etched Superleggera-scripts on either side of the carbon-fibre-patterned open nostrils through which the 715 bhp 5.2 V12 breathes additional air. The large, devouringly gaping front mesh grille is of course perforated and is another difference to the tamer DB11.

The V12 engine itself underneath the hood is not as impressive as the hood´s intricate hinge-work and underside, partially carbon-fibred. 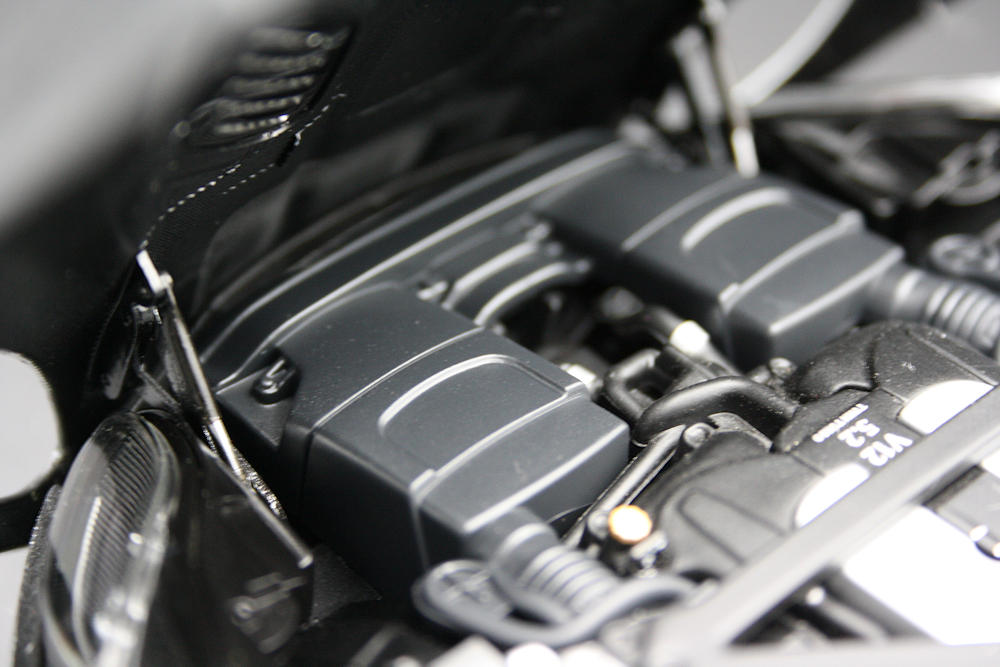 The wheels are similarly beautiful as on the DB11, again with tire markings, nice drilled brake discs, golden calipers, but this time with the addition of rather prominent valves, that we come to see more and more on advanced quality models. I particularly like these rims better in silver while on other versions they will be gloss black.

The carbon-fibre pattern of the A-pillars, roof and C-pillar direct our eyes to the rear where the airflow is taken in behind the C-pillar by the Aeroblade II feature to re-exit behind the fixed glossy carbon-fibre-spoiler- blade on the trunk lid, which when open reveals the hidden components of the Aeroblade II against which the carpeted trunk space seems neglectable. In this context, the glossy carbon fibre of the upper diffuser was to be expected. All the more surprising, if not disappointingly, the lower diffuser´s carbon pattern is moulded. 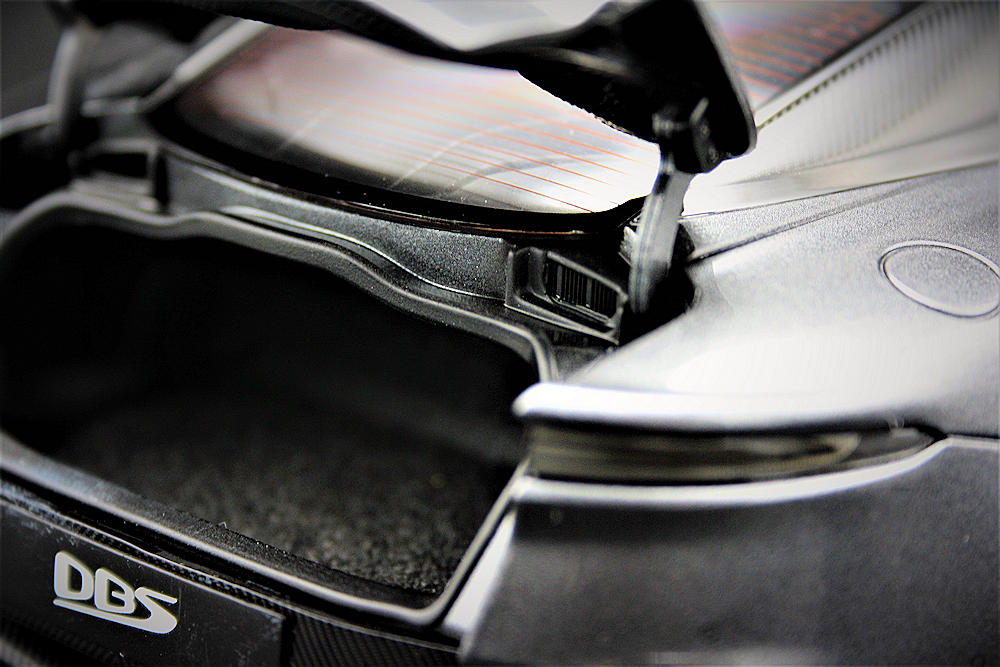 The photo-etched Aston Martin script on the rear and the white rear lights that again differ a lot in shape and colour almost disappears with this exterior colour. Stealth mode is only interrupted by the two solitary red reflectors further down on either side, while the two black titanium exhaust tips on either side don´t. Extremely hidden as well, and easily mistaken for blemishes of the paint, are the rear parking sensors. 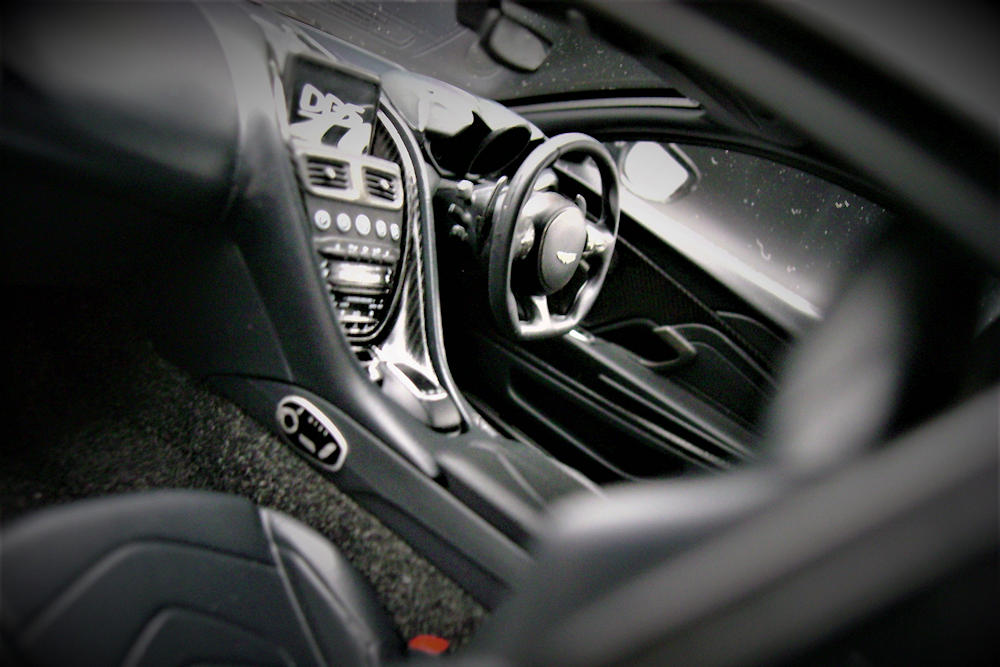 When you open the swan doors, you are greeted by DBS sill-plates and, as a pleasant surprise, plaques inside the rear door frames on each side. However, the rest of the interior then comes as a bit of a let-down, to be honest. Yes, AUTOart has ticked the satin carbon trim option on the specification list, but haven´t gone for the “unbounded beauty” of the “Create” or “Inspire” interior shown by the brochure (and most car magazines), but “Accelerate Monotone”, which is what it looks, particularly with the Alcantara and leather materials not differing on the model: rather dull. That red Aston-wing-embroidery on the seats seems to make it a little brighter may have been a good intention but is not one of the options in reality, not even if you opt for contrast stitching. Not only my heart sinks at that, but the Aston-wings on the steering wheel also have, too, beneath the level where they should be. A missed chance and so much worse than AUTOart did on their DB11. 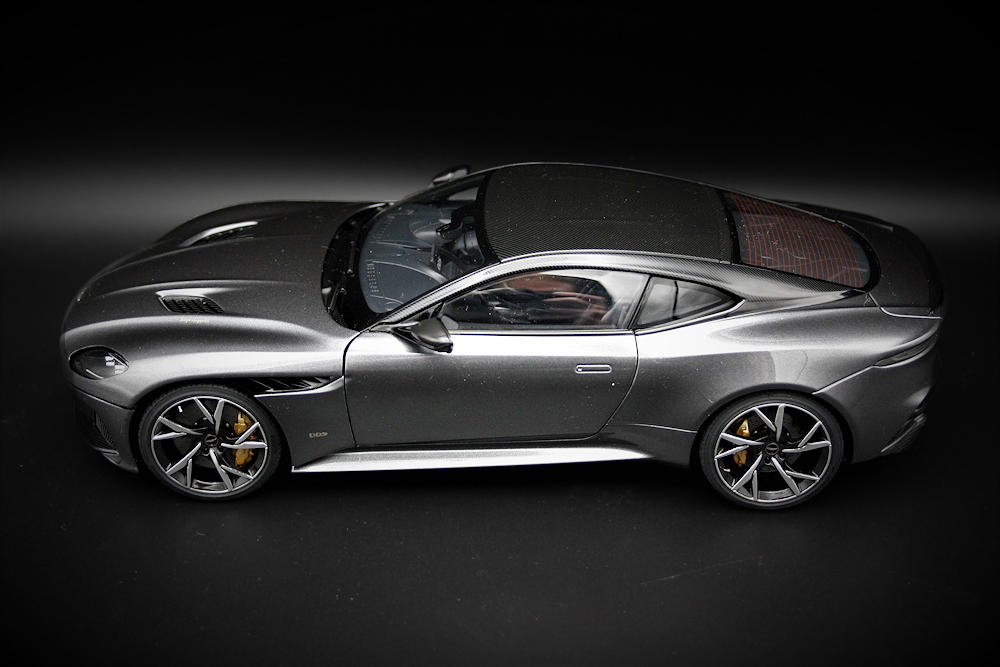 Well, maybe the excellent exterior raised my expectations too high, to more than what can be expected in what – to look on the bright side – is the mid-price category at 240-260 Euros. The DBS Superleggera appearing in Daniel Craig´s last Bond movie “No Time to Die”, the model leaves you with much the same feeling: Not bad at all, a little sad nevertheless. The model´s beauty may not be “absolute”, as promised by Aston Martin in their brochure, but yet “will leave you in awe” enough to make it worth adding to your collection.