There were a couple of episodes on Top Gear, over the course of which the trio of Brits tried to determine which manufacturer had the most good-looking cars. Surely, I thought to myself, it will be either Ferrari or Lamborghini, or better yet, knowing the hosts’ obsession with the brand, Alfa Romeo. At the end, it was neither of those. They chose Lancia as the manufacturer with the biggest number of good looking cars. Indeed, when one examines Lancia’s history, we find such gems as the Integrale, the Stratos, the 037, and this – the Delta S4 – to name but a few. 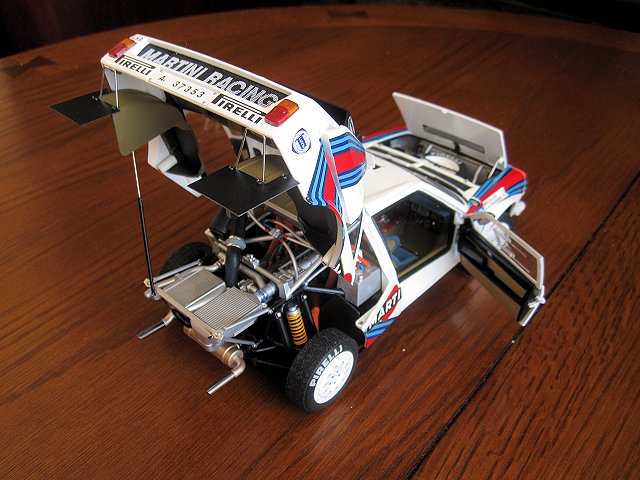 Though the story requires no re-introduction, The Delta S4 was born to expand the scope of Lancia’s utter domination in Rally competition. Built to comply with the (infamous and outlawed) Group B regulations, it had about 560 horsepower mated with four wheel drive. Hurtling through dangerous rally stages, it was an obvious time bomb that eventually resulted in the demise of driver Henri Toivonen and his co-driver Sergio Cresto, which promptly led to the ban of Group B rallying. Spawned by the terrifying 037, the Delta S4 eventually was successed by the Integrale.

AUTOart is known for producing many Rally replicas, both diecast and resin, which included the Focus, Peugeot 206, Subaru WRX, and many more, each with many iterations to represent it. Comparing this Signature release with an older Focus, the differences are immediately apparent, and so is the price. I will start from the outside and work my way in. 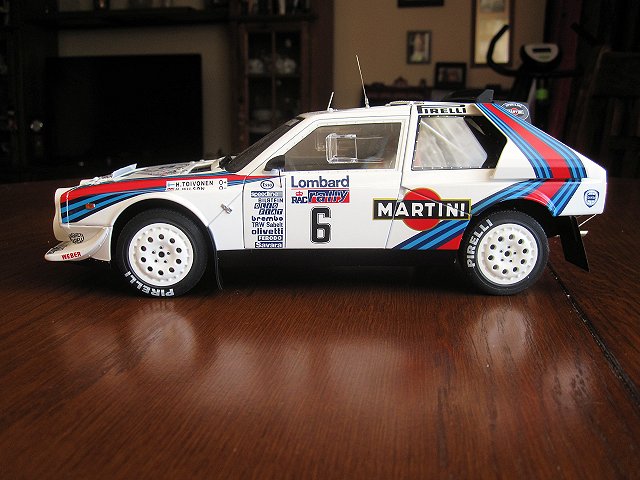 Starting with the paint finish, I can not see much to complain about. Everything looks smooth, the tampos are well applied (can’t say the same about Kyosho rally models, where the decals are hanging off the edge of body work at times), and the transitions of tampo applications between body panels are, for the most part, very smooth. When comparing this model to some of the older releases, the most apparent difference is in the lights. While the old ones look dull and clunky, the lights on the S4 are crisp, refractive, and very lifelike. There are fine mesh grilles present on the front, the hood, the roof, and on the back. The rear grille has “Martini Racing” painted on it, which looks awesome. The wide rear C-pillar air intakes also house a grille that is difficult to see unless inspected under light. It’s great to see that AUTOart didn’t spare expense here. The detail that I love in particular are the two little roof flaps mounted on hinges that can be left open or closed. When opened, they reveal mesh grilles as well. A word of caution, the roof antenna is extremely flimsy. Mine broke almost immediately. The stalk broke off from the base and had to be glued back on. The rear roof spoiler is made of questionable plastic, though it hardly detracts from the model. Make no mistake, this Martini-liveried monster is a gem to behold. 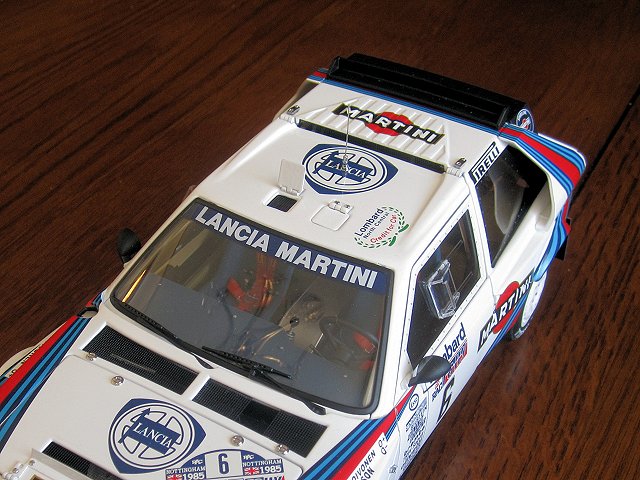 The windows are very clear, though there is a tiny bit of paint residue on the front window frame of my model. The windshield wipers are rather unremarkable. The door mirrors have extremely delicate supports protruding from the door. On the hood, there are fasteners that are well done, and tiny screws everywhere, holding down various bits of body work. The turn signals on the front and side are individually mounted items, and have good clarity. The front logo is a 3D item and looks very lifelike. The front mud flaps are made of hard plastic, but the rear ones are flexible and attach with three screws to their adjacent wheel arch. 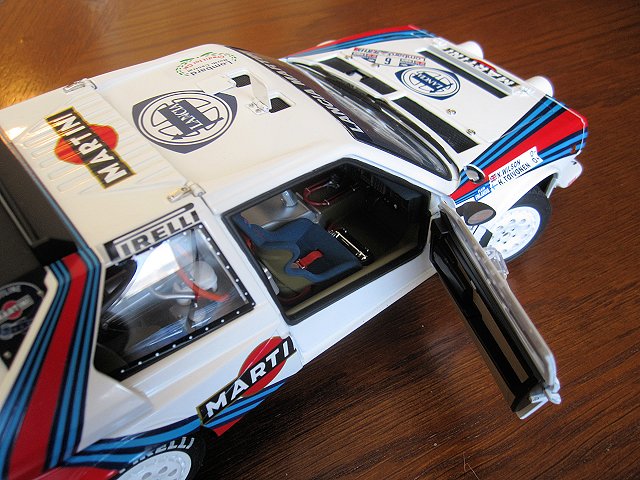 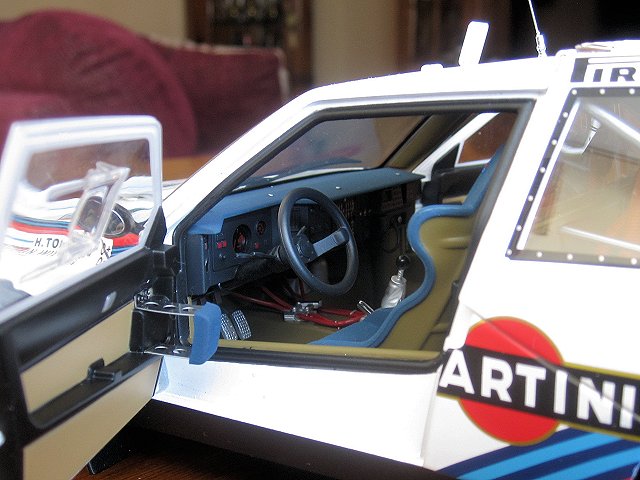 The interior has no special features. The seat belts are molded plastic and the gear shifter looks unremarkable, though the seats and dashboard are both done using a soft-to-touch finish that is meant to resemble suede. The driver’s side door has a leg support protruding from it, mounted on two photo-etched metal supports, and there are two very hard to notice hooks in between the seats, mounted to the roof. Behind the driver’s door, there is a little flashlight mounted to the rear bulkhead. Very nice! The speedo and various switch gear look well enough done, and there is a shiny fire extinguisher in the co-driver’s foot-well that adds a nice flair to the cockpit. 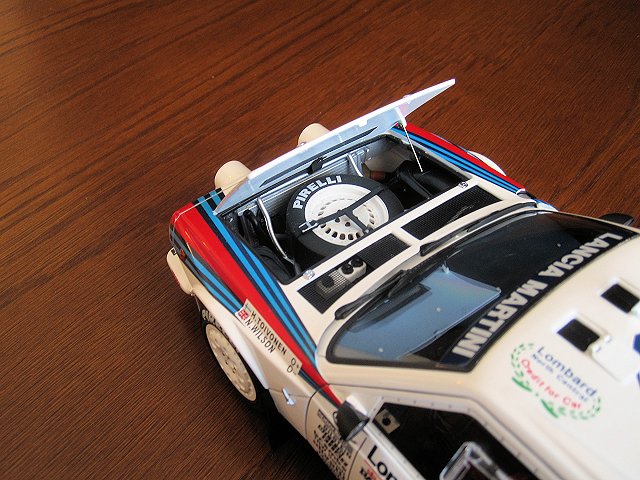 Curiously enough, the front clam-shell does not open, though the hood does, which is held in place by two lovely hinges. When opened, it reveals a spare (the belts are plastic), and minor suspension detail. Brake-cooling hoses can also be seen here. If you look on the underside of the hood, you will see a hood support stalk, and a strip of rubber fastened by a single screw holding it in place. Awesome attention to detail. 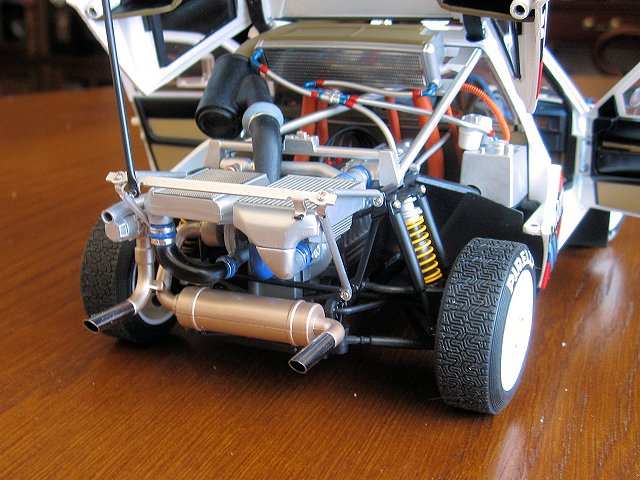 The rear hatch has a support rod that extends from a tubular housing. When opened, your attention is immediately captured by the giant radiator and supercharger (the Delta was both supercharged AND turbocharged to reduce turbo lag). They are photo-etched and look quite nice. The engine is difficult to see due to being ensconsed in various tubes, wires, cables and chassis bits, topped off by the large gaping air intakes on the inside of the hatch, which feed cool air to the radiator and supercharger. The engine is done well, with plenty of shiny bits covering piping and coloured accents on the wires. There is another radiator on top of it, fed by the roof grille, as well as an air intake that disappears into the engine. The exhaust tips are well cut and look crisp. The rear suspension looks great, but sadly isn’t functional. The under-body reveals a bash plate on the front and some more engine, and suspension detail on both front and rear. The tires are excellent and sport accurate tread pattern and realistic “Pirelli” print. The excellent wheel hubs house brakes that are sadly out of view. 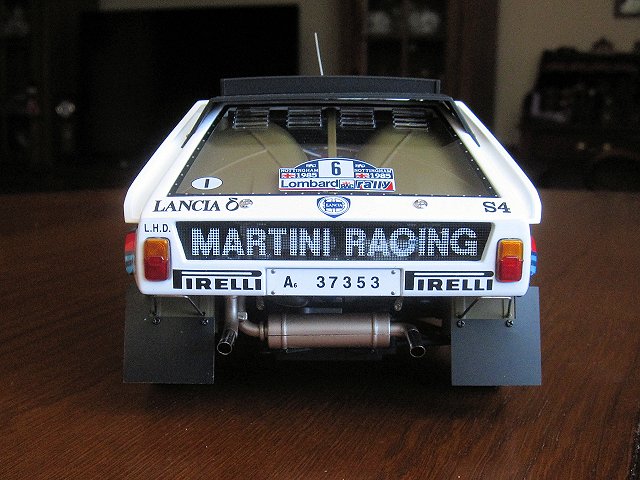 Though there are minor niggles with this model, the sheer overall quality outweighs them easily. My only regret is that the older rally models from AUTOArt don’t look as good, and when you display them side by side, the difference is striking. The paint finish is so much more vibrant and every single detail is so crisp and sharp. This is a model that will turn any rally fan into a giddy child. If you still haven’t acquired one, I highly suggest that you do. It will make your collection look very good indeed. Enjoy the pictures! 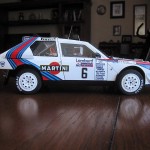 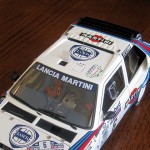 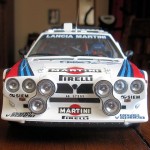 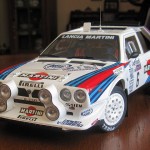 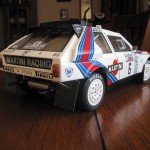 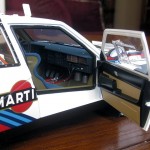 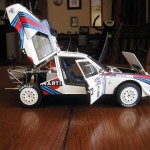 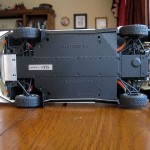 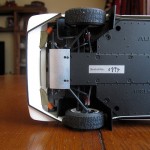 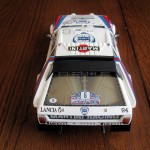 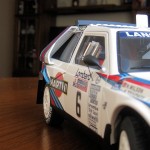 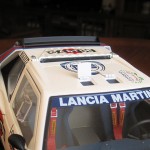