Here is another overlander and model manufacturer most of us in the western hemisphere will not have heard about. Now, if you don´t know Aurora Models there is no blame as they are new to the game, the ARO 244 D being their first model. ARO is short for “Auto Romania”, a state-owned offroad-vehicle manufacturer in communist-era Romania. They had started off by making a licensed variant of the Soviet-Russian GAZ-69. This here commemorates the 50th anniversary of their own design introduced in 1972, the 24 series, with the 244 being the four-door estate variant. They were initially made almost exclusively for the military and government agencies, from 1981 available for private customers who were both able to obtain government approval and pay triple the price. This side of the iron curtain, it may remind Portuguese and Spanish readers of the Portaro and Hispano derivates that were offered in the southwest of Europe from the 1970s. Our model is to represent the 1989 Diesel version, the year when the communist dictatorship was overthrown in December after the Berlin Wall had come down earlier that same year. In this variant it would most likely have had the 90 horsepower diesel engine, hence the D in the name. That does not sound much, but the offroad community deems it a capable cross-country workhorse. 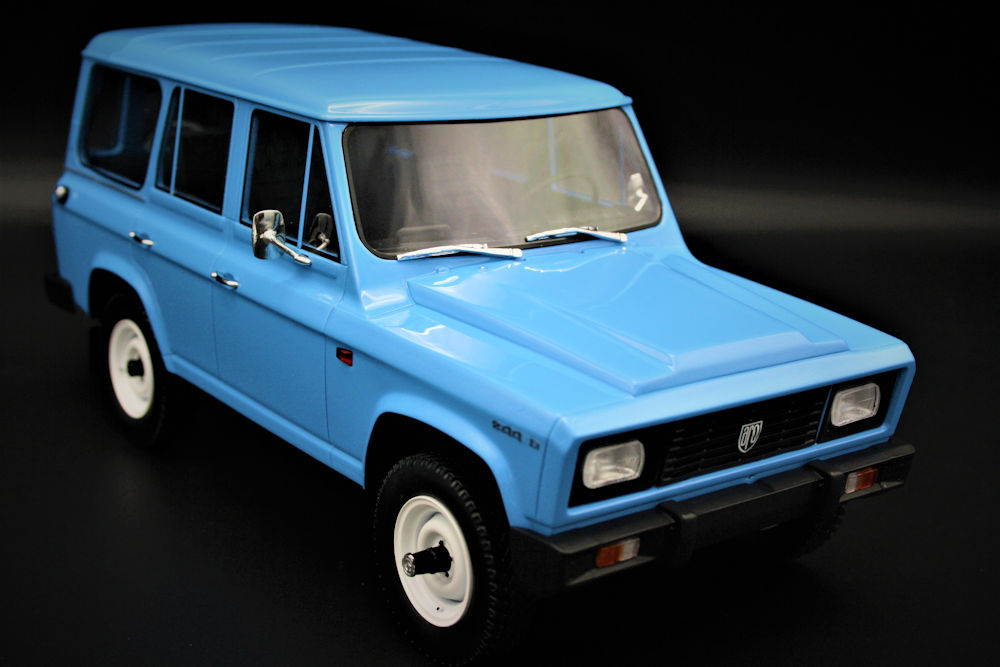 Aurora´s debut is a sealed resin model. It is a decent model of a no-nonsense vehicle. I can confirm their claim that the “applied paint has a very good quality“. Only on the rear bumper, our sample has one spot of bare, un-blackened resin. Remarkably, the tri-angular sections of the side windows are nor just separated by a thin paint line or sticker, but have a thick frame element stuck onto the window pane.  The front wheels don´t steer, have white replications of simple steel rims with stubby valves, and no branding on the rubber tires. That having “reproduced details of the chassis, elements of the transmission, suspension and exhaust […] is rarer in resin models” is absolutely true – just compare with BoS and Cult Scale models, although even Aurora´s undercarriage remains somewhat toy-like when compared to most metal diecast. 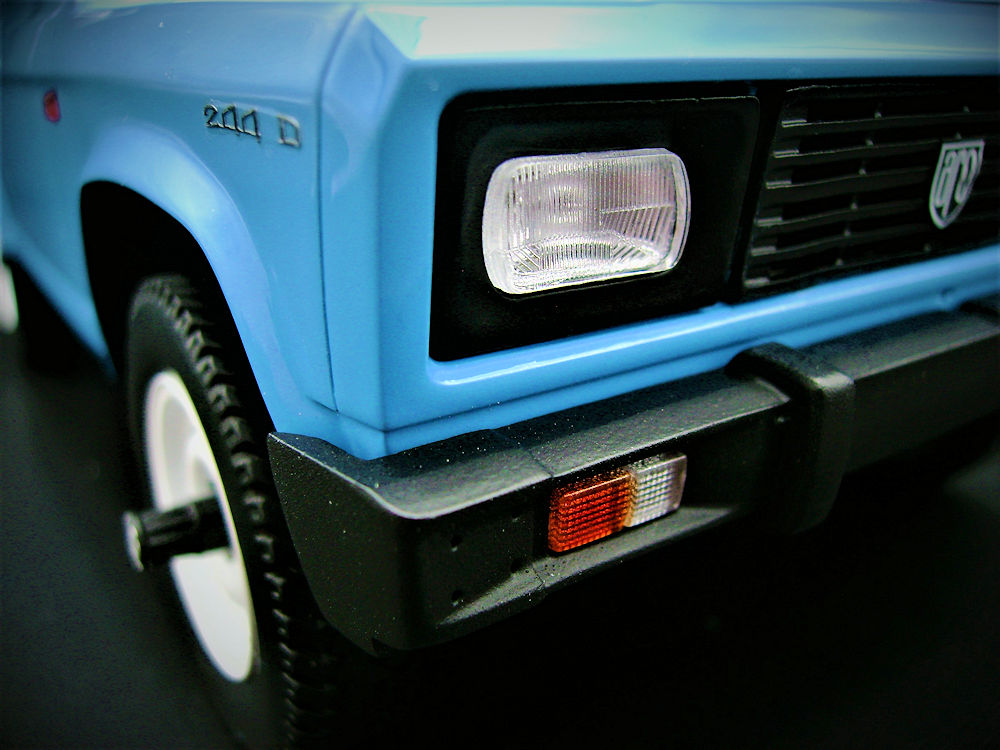 What you have to give Aurora Models credit for are the lights. Even the smallest wedge-shaped side markers and rear reflectors are patterned transparent lenses, not just print-ons (as on the INEOS Grenadier), and the head and rear lights have reflectors and light bulbs replicated behind these lenses. Other pleasant details are the chrome fuel filler cap, door handles, mirrors, windshield wipers and the photo-etched 244D badges on the front corners. 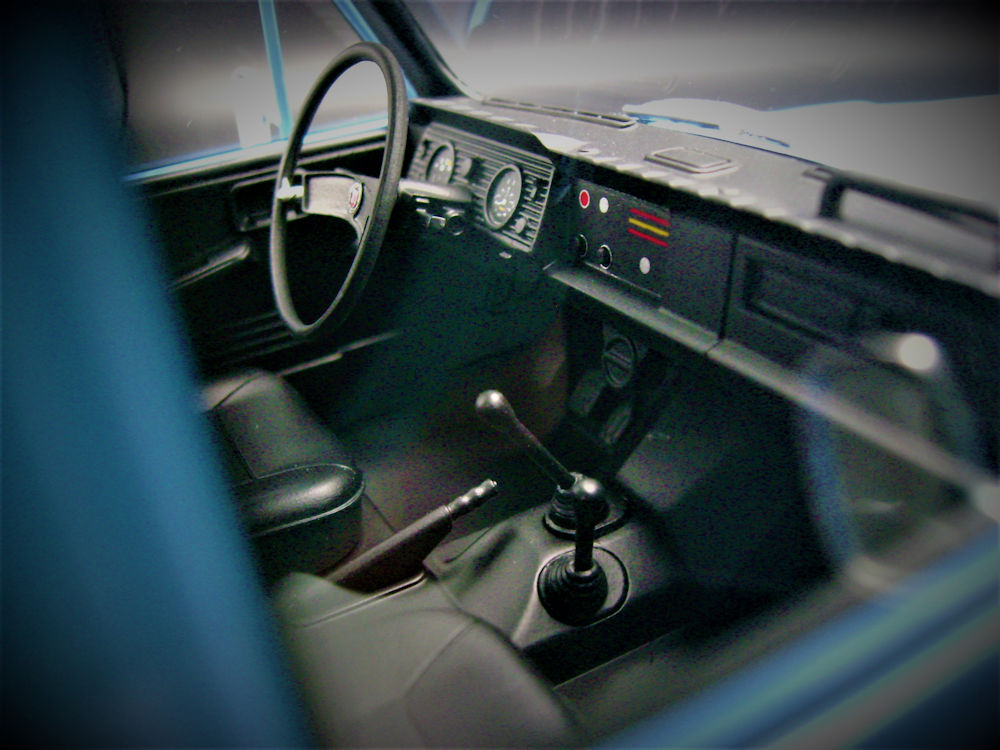 “The interior is detailed, featuring roof upholstery, dashboard gauges, as well as the small logo on the steering wheel” is what their website says. For the steering wheel and the gauges behind it, this is very true. To have indicator stalks etc is a nice detail too. Seats, door-trim, hand brake, gear and differential levers are rather simple, though. The dashboard´s center features two three-dimensional knobs, but the rest is just painted on to hint towards other functions. Like most resin models, there are absolutely no safety belts. So “detailed” is relative here, but not unbefitting a no-nonsense workhorse. 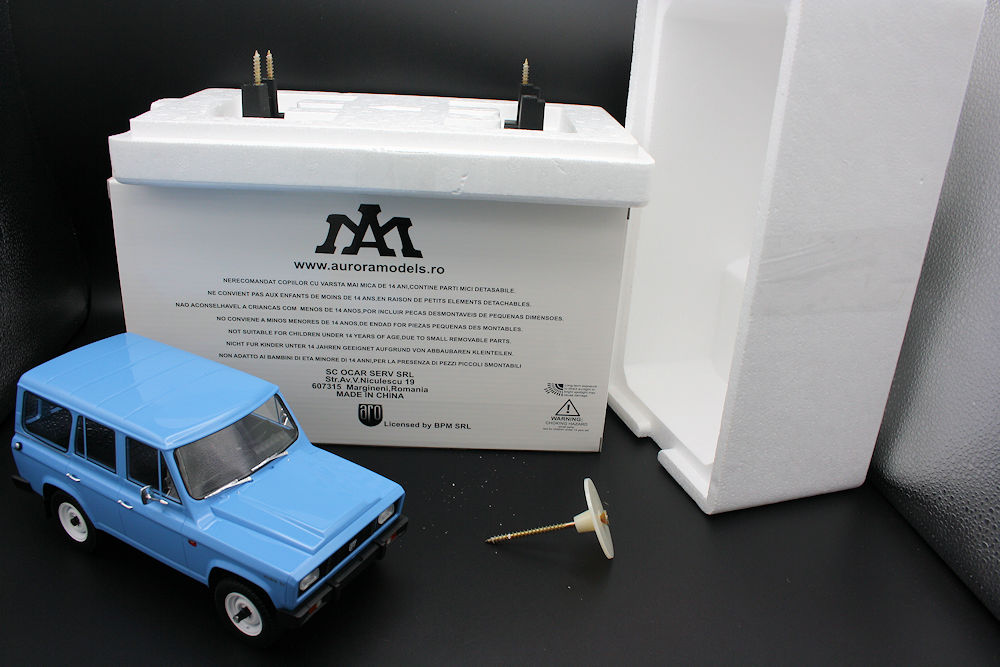 This being their first model exclusively sold through Aurora Models´ website, we have to take a look at their packaging, both in terms of the original box and outer shipping packaging. The original box proudly displays their logo and a Romanian flag plus the scale, each printed on. What model you receive can only be read on a small extra sticky label that also has the model´s individual number matching the badge under the car. That´s clever for a newcomer, as they can use the same outer box for future models. Inside the model is screwed down with giant screws into the lower half of the usual two-piece Styrofoam shell. For shipping, the model gets lamentably few extra precautions, which is why the first sample arrived with its interior ruined. The shipping box was not much bigger than the white box that came thinly wrapped in bubble wrap and surrounded by Styrofoam plates to line the inside of the outer box. As we all know from car safety, this means there is no “crumple zone” to mitigate any impact, so that the shock´s full force will be transferred onto the model. Not labelling the parcel as “fragile” or “handle with care” will mean, it will be tossed around carelessly. What this did to the model was rock it so hard that the front seats (merely glued into place, but not anchored into the base) came loose, destroyed the delicate interior and knocked out some windows. Our pictures show the result. Aurora Models say, I was merely unlucky and it really did not happen with the second sample sent to me as a replacement.  Yet, I do advise buyers to use a payment method with buyer protection as I have seen better precautions and would strongly recommend improvement. 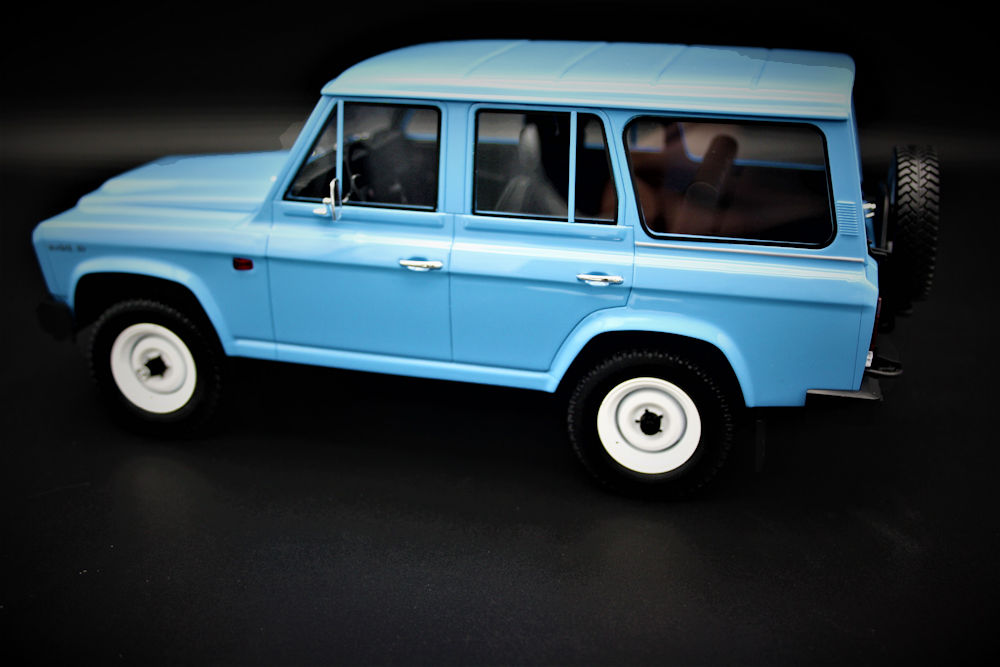 This debut from a Romanian model enthusiast who patriotically aims to fill the Romanian niche in an extremely competitive market joins a growing line-up of communist-era nostalgia models. Priced at a budget-friendly 100 Euros it is close enough to BoS models in quality. If compared to Solido´s metal Lada Niva which has opening doors and steerable front wheels, but is only half the price, it doesn´t exactly seem a bargain. Yet this decent effort of setting up a business and moving off the beaten track deserves our attention and if it fits your theme you might find this exotic eastern European communist era off-roader well worth buying directly from Aurora Models´ website, limited to two pieces each per person. Just avoid the vultures who somehow obtained more than two and sell at up to twice that money plus 60 Euros shipping on eBay.