Fans of the Amalgam 1:18 Ferrari series will be happy to see the latest effort in the series. The Ferrari F12berlinetta is coming by the end of this month. Model is produced to exacting standards of the original car. No access to motor or interior is permitted as the example is sealed. If interested the suggested retail is $595US

About the Ferrari F12berlinett…  “The Ferrari F12berlinetta was developed as Maranello’s replacement for the 599 GTB. The key areas of concentration and improvement were in outright speed, with the F12 fulfilling its mission in being vastly quicker than the 599 but also more pleasurable at low speeds, which was another key objective. To look at, the F12 is smaller in all directions and it weighs some 70kgs lighter than the 599. Performance-wise it produces significantly more downforce.*The engine is a V12, 6262cc naturally aspirated behemoth, which produces 730 brake horsepower, making it one of the top five most powerful Ferrari road cars ever made. This allows the F12berlinetta to accelerate from 0-62 miles per hour in 3.1 seconds and to also achieve a top speed of over 211 miles per hour. The F12berlinetta was named “The Supercar of the Year 2012” by car magazine Top Gear.” 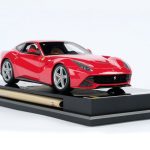