Because of its enormous size and weight, Ettore Bugatti is famously known to have called the Bentley “the world´s fastest lorry” back in the LeMans racing days. In this respect Bentley´s high-performance flagship keeps the Bentley tradition. Within the traditional 6.75 litre engine the 2.5 ton and over 5,500 mm long behemoth harnesses 530 bhp, making it capable of accelerating from 0-62 mph in just under 5 seconds and proceeding up to 190 mph. Unlike its LeMans ancestry like the Speed Six or Blower Bentley whose spirit it invokes, the Mulsanne Speed is no competition for modern day sports cars or grand tourers. The Rolls-Royce heritage, which is reflected best in the Speed´s interior´s enhancements over the “normal” Mulsanne,  literally weighs too heavy to do so. In this respect the Mulsanne Speed is more succeeding its namesake (Mulsanne) Turbo R and its successor Arnage T which were performance spin-offs of the respective Rolls-Royce limousines. So it is more those latter one´s British noblesse that the now independent Bentleys are competing with. 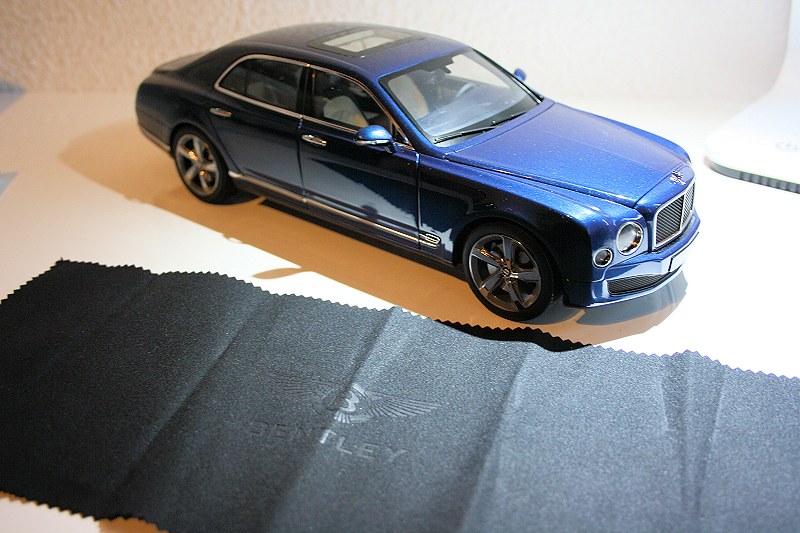 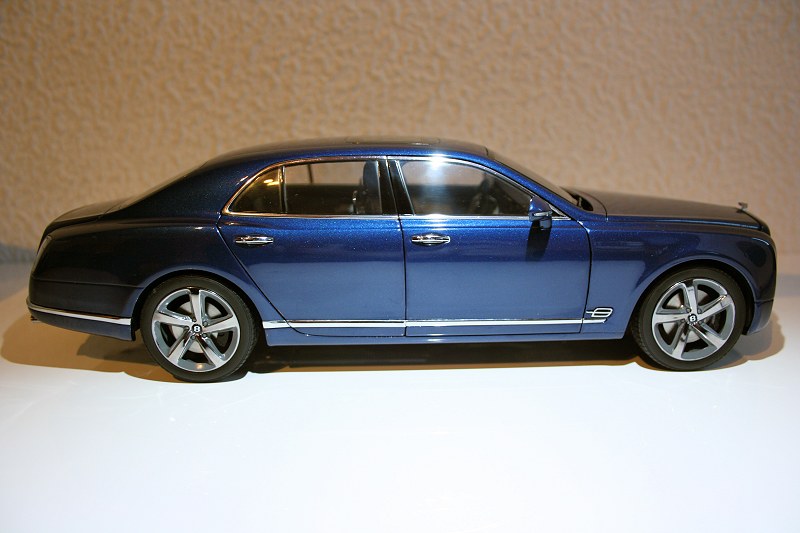 The model reviewed here is the dealer edition exclusively sold by Bentley themselves. Part of its exclusivity used to be their right-hand-steering until the (fountain blue) Azure, and still is their exclusive colour: Our model´s immaculate paint job sparkles with fine metallic flakes in a shade of blue that is recognizable as the brochure´s exterior colour sample no. 89, Marlin Blue. This exterior is complemented by a duotone Imperial Blue/Linen interior which nearly is the specification for the Speed´s Voyage edition, which, however, comes in Sequin Blue, a more exclusive of the 16 blue shades offered for the real car. If you do not like this (IMO excellent) colour combination or shy away for the buying-experience at a Bentley dealership, you can pick one of the two presently available versions in onyx-black or rubinho-red, or the upcoming havana (brown) or crystal (white) hue with matching interiors. 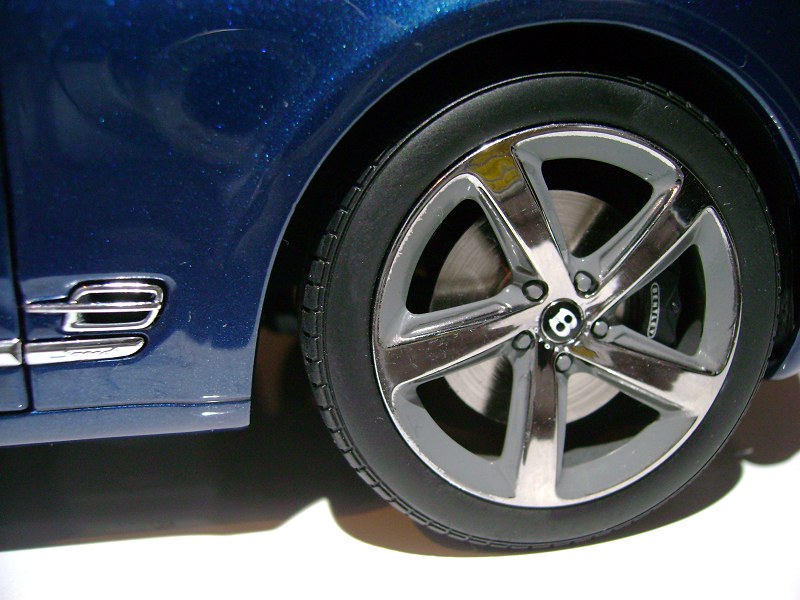 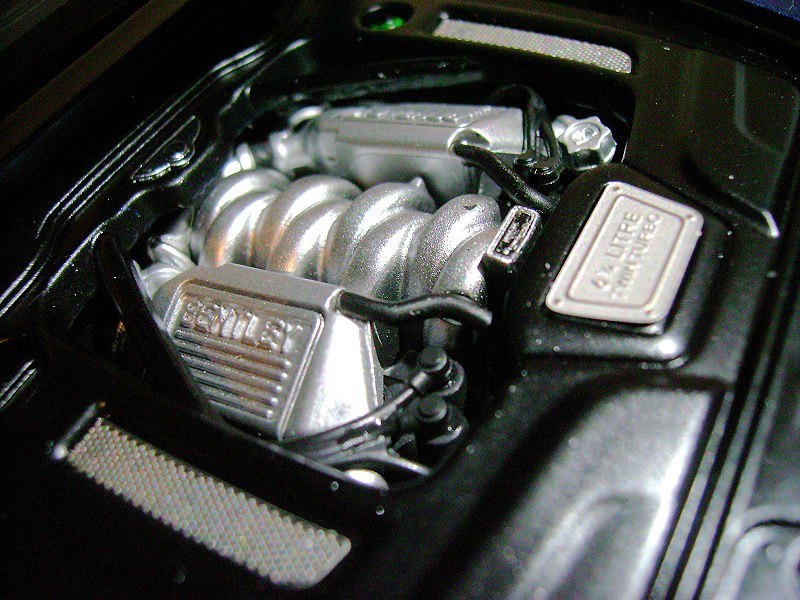 All the other details will be the same on each of the colour versions. Raising the collector´s enthusiasm are exterior details like the intricately replicated headlights and the taillights with three floating red ovals under the clear lens. Receded within the midst of the upper and lower oval you can make out the reflectors structure, while the middle oval has a clear section for the reversing lights. All the chrome accents are present. Underneath the Bentley-B-shaped air inlets in the front wings we find a nearly inconceivable “Speed”-script, that is one of the small details by which to distinguish the Speed from the brand´s “ordinary” flagship. Of course the rifled exhaust tips are replicated, too, but given their width could have been drilled a bit deeper. The exterior´s highlight certainly are the Speed-specific 21-inch-alloys, on which chrome and matte contrast nicely and the wheel nuts convince perfectly. Even “Bentley Motors” has been chiseled finely around the central B, great! Wonderful, too, are the Bentley badge on the boot and the flying B hood emblem enthroned above the Speed´s dark-tinted mesh grille. That the mesh grille is not photo-etched, but only a structured plastic plate spoils the excellently luxurious impression quite a bit. Whereas that might be okay for a cheap Rastar Mulsanne, it´s less than desirable on an expensive collector´s piece, Kyosho! 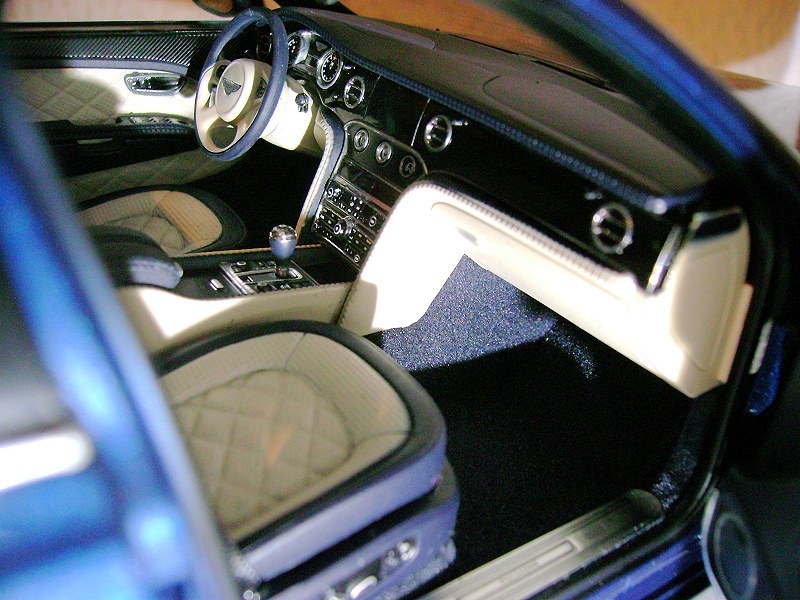 The more striking differences of the Speed over the “normal” Mulsanne are its luxurious interior upgrades and so perfectly replicated by our model that you will be thankful for any light cast on the interior through the glassed roof section. The inside of the rear door is a small piece of art in itself: It replicates the quilted leather in the Linen primary colour, has the secondary Imperial Blue upholstery including the stitching on the armrests, partial carpeting in the same blue, an imitation of the three Naim-premium-speakers, chromed handles and ashtray and a carbon-structured windowsill. The front and rear seats again wonderfully imitate the same quilted and perforated leather, surrounded by the same plain Imperial Blue with stitch-marks that covers the centre armrest the dash board. The rich carpeting matches this blue. In the rear the self-deploying picnic tables proudly present their keyboarded i-pads. The dash´s veneer depicts the piano black option and the detailed instrumentation even shows the sporty Aston-Martin-inspired inverted needles on the speedo and tacho. Let the pictures speak for the arrays of buttons and switches, the air-conditioning´s inlets, the gear lever, and all the other details on the centre console. A rich, inviting gentleman´s club interior, of course complete with textile seat belts and photo-etched buckles, that pays due homage to Bentley´s artisans en minuature. 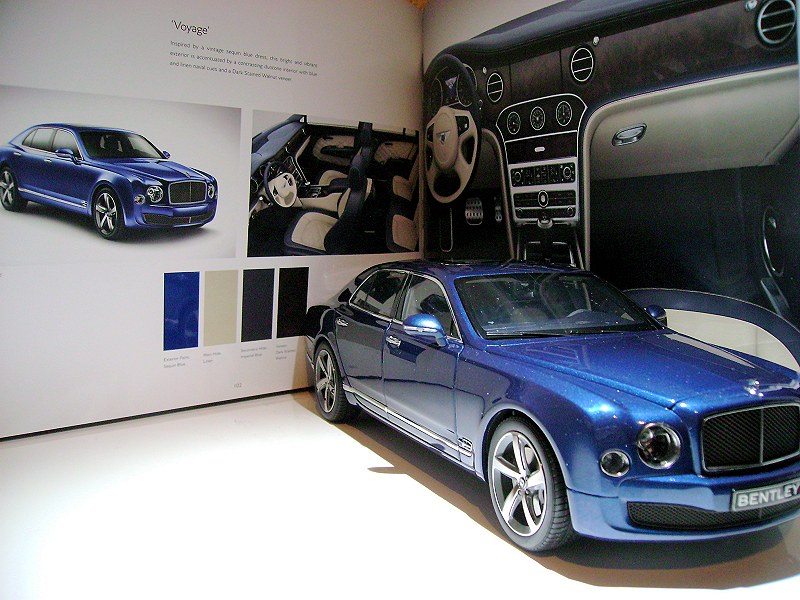 Doubtlessly, it will primarily depend on each collector´s colour preferences which variant of the Mulsanne Speed to choose. The slightly more expensive dealer edition holds an additional exclusivity, even though the packaging is no longer as distinct as it used to be in the Minichamps era.  The thin Kyosho-packaging seems a bit cheap and the cloth embossed with the Bentley-logo is probably supplied with the other variants, too (Please correct me in the comments if I am wrong). However, in my experience Bentley dealers are more than willing to treat the Bentley aficionado to quite some added value. Apart from the Bentley invoice in your own name, our dealership here in Frankfurt has given me the 134-pages Bentley range brochure Pure Bentley. After buying from the Bentley Collection at Jack Barclay´s in London, I received the Bentley Magazine to my home address for a year. On other occasions I was allowed to sit in a Bentley. This invaluably increases the buying experience and I shall like to thank both Bentley dealerships for kindly supporting an aficionado´s enthusiasm irrespective of his financial means to buy the real car. For everyone who shares the passion for Bentleys I can recommend Kyosho´s Mulsanne Speed. 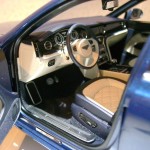 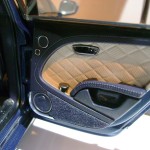 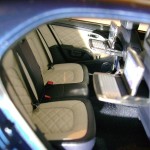 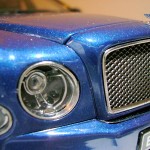 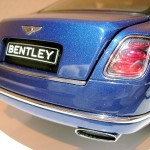 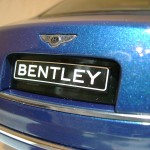 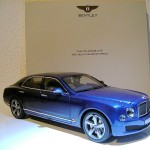 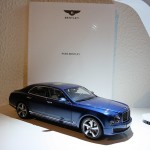 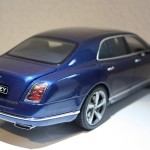