It’s that time of the year again; Maisto and Bburago 1:18 models are back at Costcos across the US, the one where I shop included. And while I’m not a massive fan of the two manufacturers — the build quality and attention to detail often lack — there is no denying that the low price of $15 per model is a fantastic deal. Pairing that and the fact that the selection is quite large as opposed to last year, with over 60-70 cars in total on the display, I took this as an opportunity to negotiate buying not one, or two, but four of them. I couldn’t resist. Nowhere else can you find a credible, $15, new 1:18. Of the four models purchased, the Maisto C8 Corvette is first up. 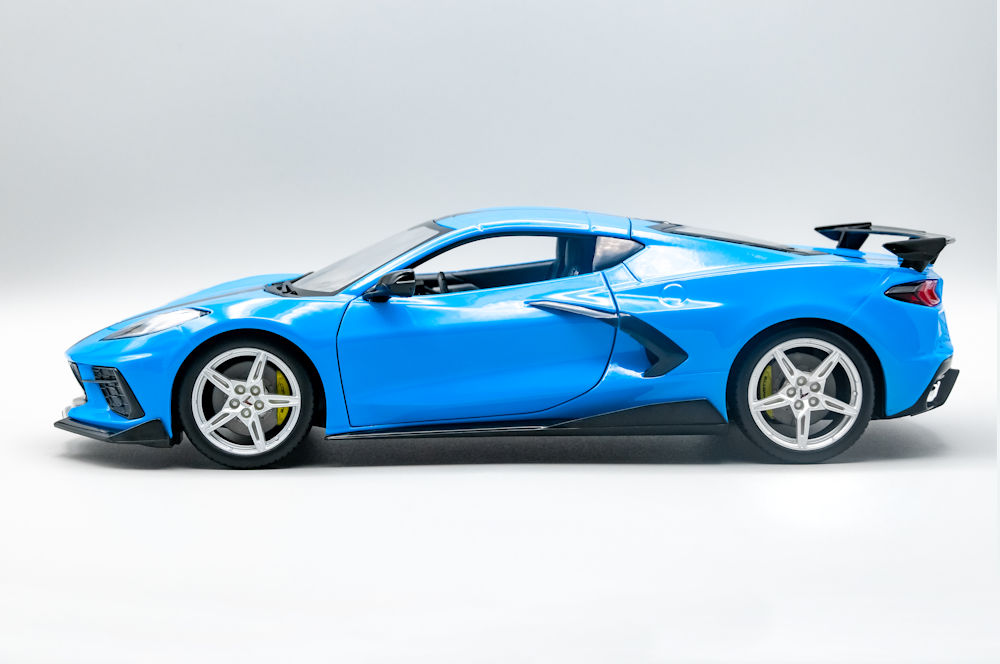 Among the four Costco Maistos, the C8 Corvette stood out the most when I was in the store. I’ve been wanting to review it ever since I heard earlier this year that Costco was planning to stock up on Maisto 1:18s at the end of the year. It’s been said that Maisto’s C8 stands out when compared to their recent castings. My sources tell me that this C8 is supposed to be much more detailed with far better-shut lines and higher quality paint – rare traits when it comes to a Maisto model. The buzz I heard set the C8 bar pretty high. I wondered if this model would be everything I’ve ever wanted in a budget 1:18 or would it have all the faults often found on 1:18’s at this price point. Let’s find out. 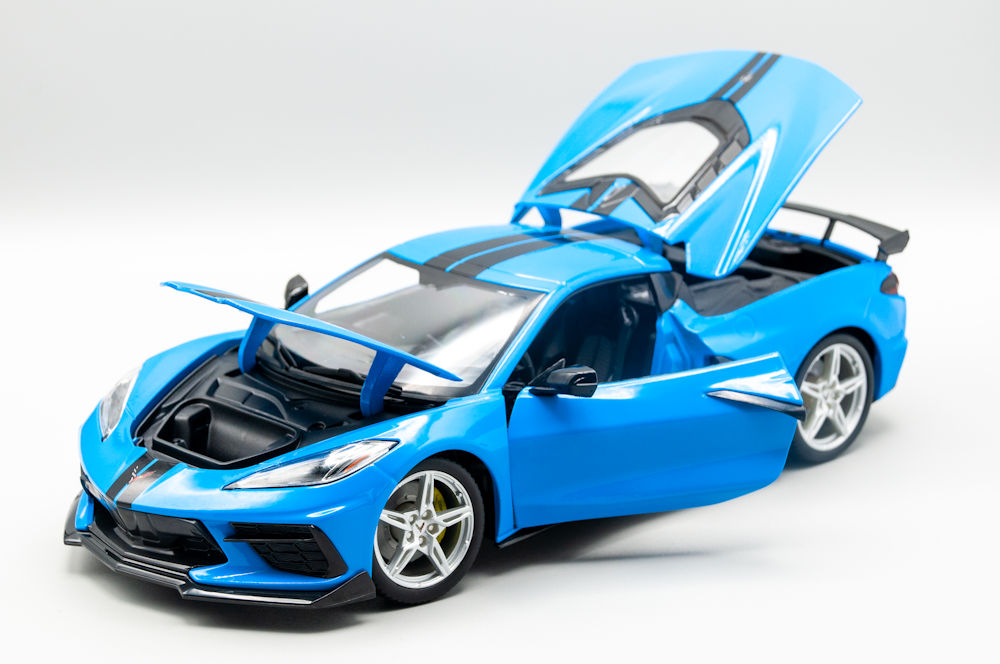 Maisto’s fall into the crowded sub-$50 category (along with Bburago) which comes with risks, but can also produce rewards with the right car. As I’ve been reviewing some high-end models lately, I had to reset my expectations to give the Maiso a fair shot. Looking at the C8 with the proper perspective, I came away impressed overall with what this Maisto had to offer. The beautiful paint job, this one dubbed Rapid Blue, has a lot less orange peel than most Maistos and perfectly applied Midnight Grey Dual Racing Stripes.

The build quality is also very impressive. None of the usually found offenders such as loose plastic aero bits were present on the C8. I found everything to be rock solid. Even primary poor quality offenders such as the headlights and rear wing were in good shape.

The only first impression that came up short was the packaging. I’m a packaging fan and Maisto takes the easy way out by using the same packaging for every model; the name on the baseplate is the only differentiation. Maisto’s packaging on the C8 is the exact same packaging used on the models I purchased last year from Costco. If you use the same packaging you might as well make it look a little more visually appealing and higher-end, like Bburago Signature boxes. Outside of that, everything isn’t bad at all! 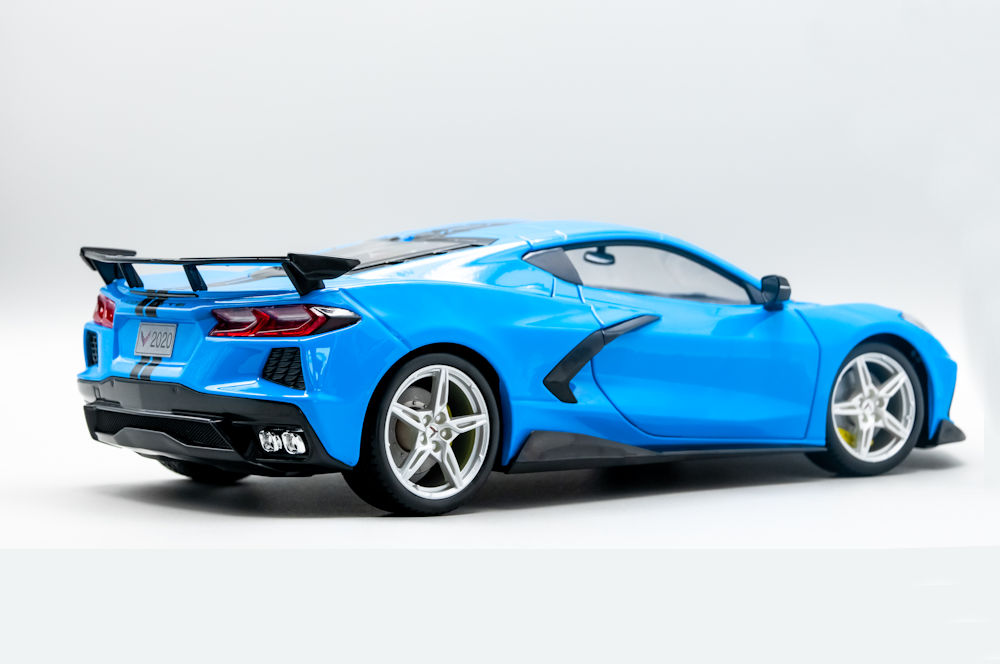 When considering the price point, the exterior is the best part of this model. I found the proportions and body lines to be just about perfect; the same can go for the moulding of the panels and ride height. The headlights aren’t loose pieces of slightly opaque plastic, instead, they’re far more sturdy and of higher quality. Other aero parts such as the front and rear wings, side vents, and side skirts are painted much better than what you’d find on older castings. This is a massive plus as I feared this aspect would turn out poorly. The C8’s gorgeous five-spoke wheels compliment the paint job very well, with the green calipers adding a touch of flamboyancy. 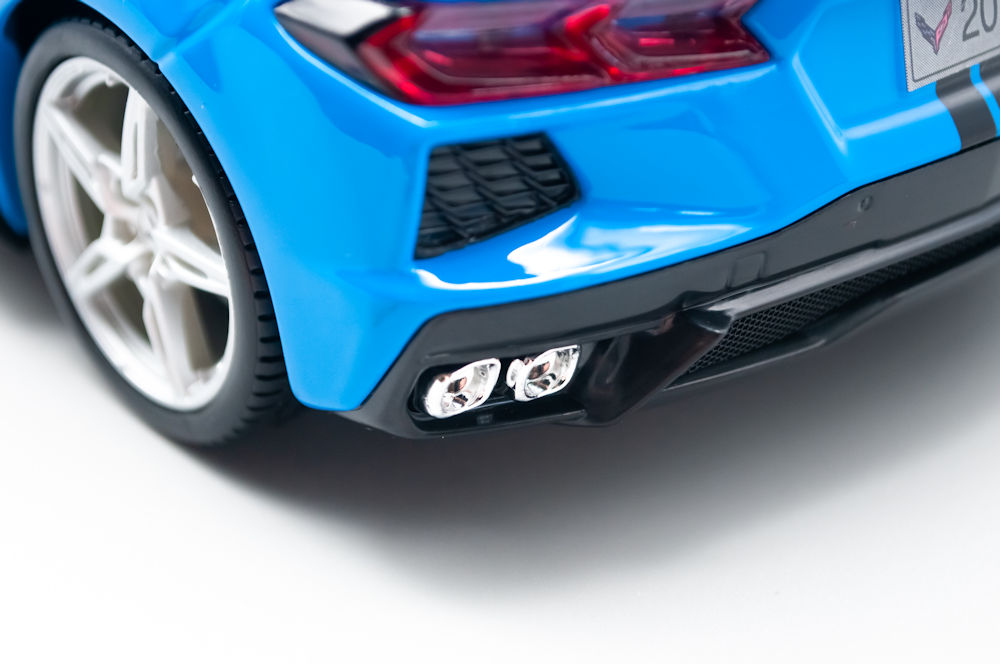 The rear is equally as good, Maisto paid great attention to things they’ve overlooked with past models. The rear vents are detailed to a reasonably high degree for a $15 model; so are the taillights and “Corvette” script. The plastic engine cover (and windshield) is (thankfully) very solid and doesn’t distort, something I wish I could say about the previous model I reviewed. All in all, I’ve found the exterior of Maisto’s C8 Corvette to be excellent.

Unfortunately, the C8 interior is that of a $15 model. The entirety of the interior is made up of coarse black plastic with very little detail. The only somewhat detailed items are the gauge cluster, infotainment screen — both low-quality decals — and door speakers. Maisto barely painted the row of buttons stretching from the dashboard to the armrest and didn’t paint the storage compartment and buttons on the door. 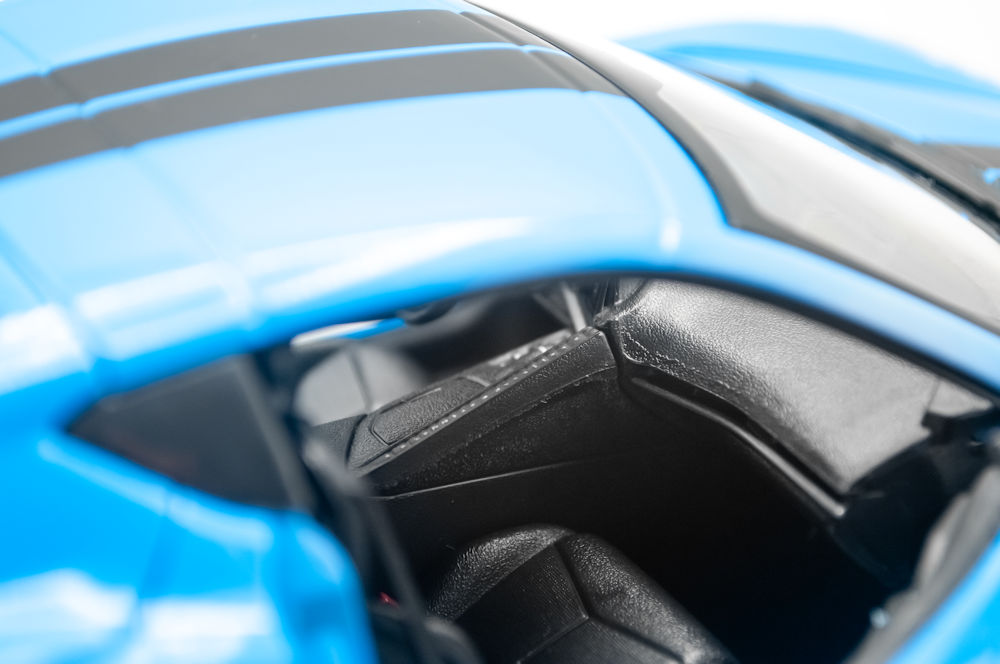 To make matters worse, there isn’t any texture to the door either, besides the speakers. No window controls, door handles, or anything else. Only a flat piece of black plastic. The only other real details inside Maisto’s C8 are the painted seat belts and Corvette logo on the steering wheel. Granted, this is a budget model, but it’s disappointing regardless. 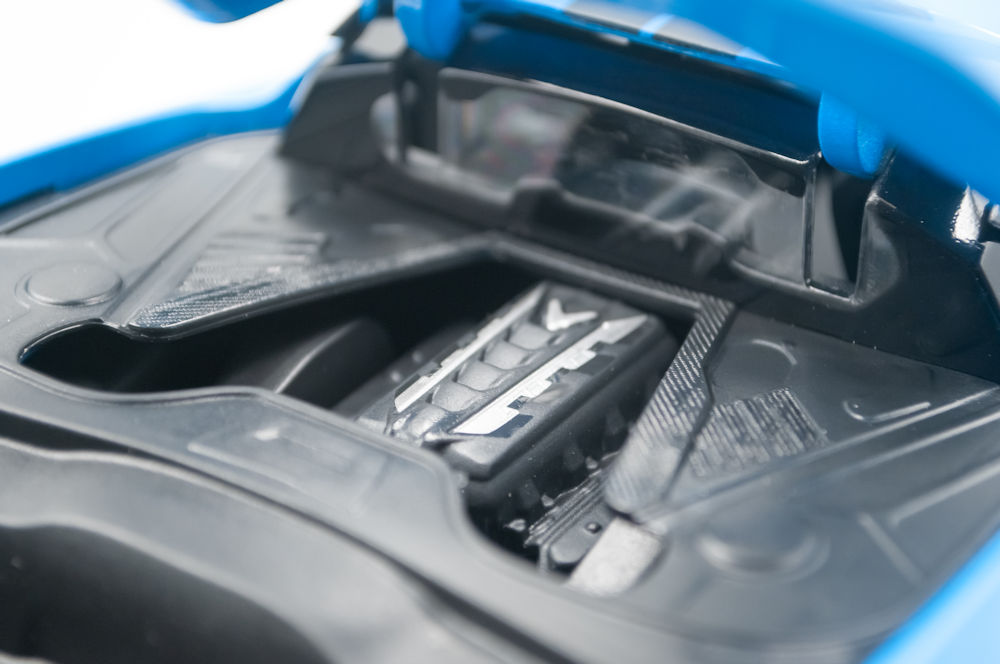 With that said, I have to give Maisto credit for the moulding of the engine itself excluding the surrounding bits. It’s painted quite well with the “Corvette” script present as well as the logo. However, that doesn’t excuse the otherwise mediocre reproduction of surrounding mechanical parts.

I love the model but there are a few small things Maisto could have improved upon to make this C8 perfect: 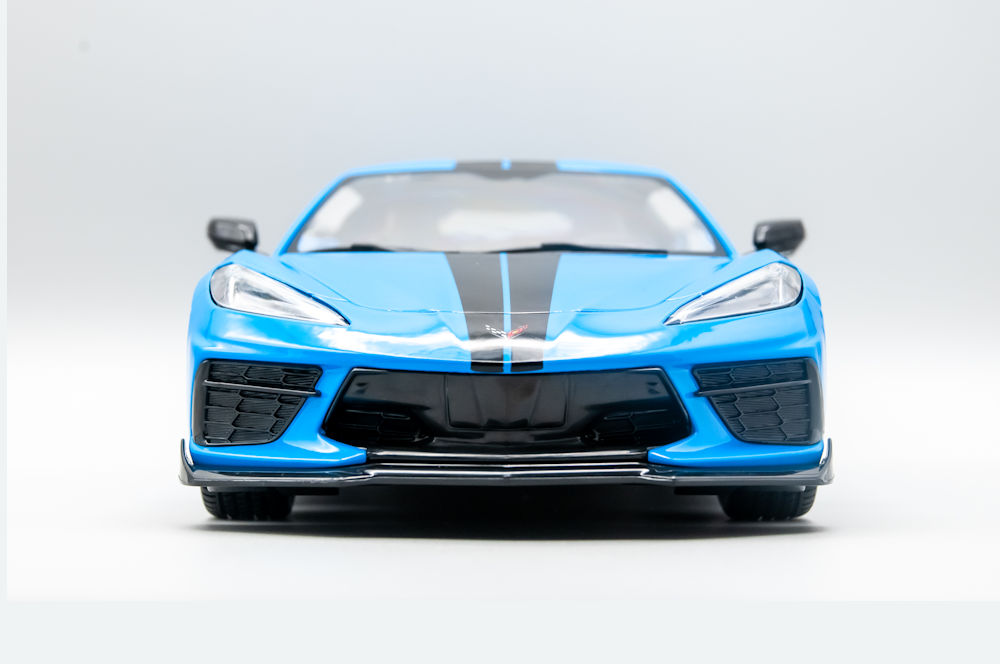 Camber: Like many Maisto models, this C8 suffers from horrible camber, most of which is present on the front wheels. It looks really bad and makes it seem like a toy car.

All black plastic: There’s a lot of black plastic, most of which is cheaper and more coarse than what you’d find on better 1:18s. Adding insult to injury, all that coarse plastic reflects light, making it look even worse when examined closely.

Exhaust tips: I know this comes as no surprise considering the $15 price tag, but the exhaust tips are pieces of chrome plastic without the depth found on other models. At an absolute minimum, Maisto could have painted them grey or gloss black. 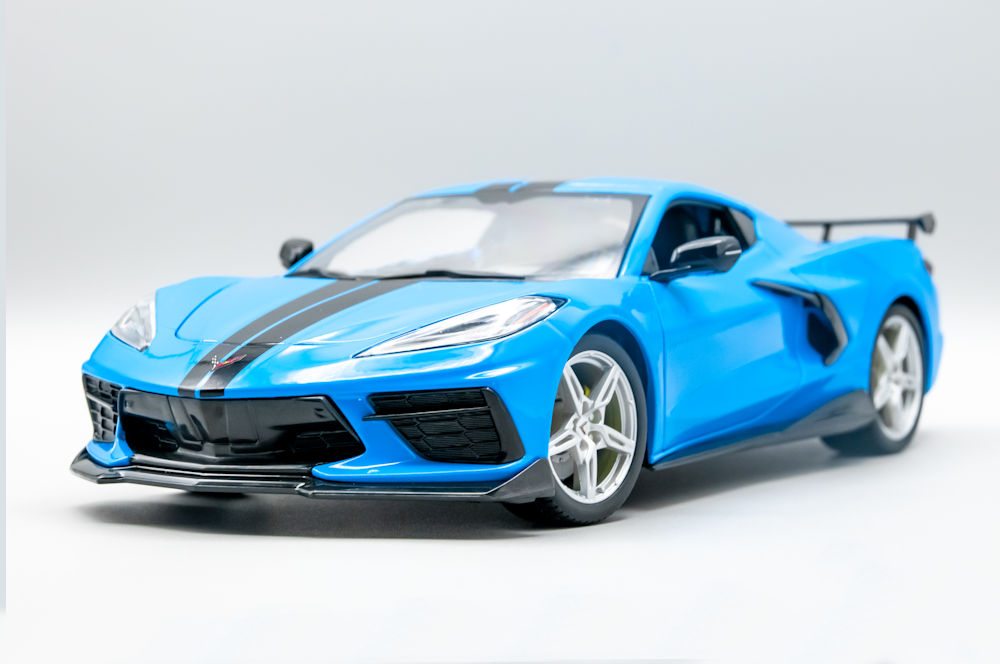 Vents: None of the C8’s vents are perforated. Maisto uses moulded plastic, the same plastic mentioned above. That isn’t too bad for a $15 car except there are a lot of vents on the C8 Corvette which further highlights the problem. I’m not expecting a Maisto model to have more expensive, perforated vents but more effort could have been put into making these vents look more realistic.

Hinges: Don’t even get me started on the hinges. For ages, Maisto has used very large and thick “dogleg” hinges that look horrible, and here they are again on this model.

You can look at this model in two ways. The first is a $15 bargain at Costco, which has some nice touches for that price making it easier to overlook some of its flaws. The second is a model costing between $30-50 at many online stores. At that price point, it’s harder to overlook gripes such as the hinges and low-quality plastic. I’m preferring to look at it as the $15 bargain which is why I’d give this model a solid 4/5. If you’re interested in adding the C8 to your collection, get it from your local Costco or Sam’s Club. If you can’t find it there, you can purchase it more expensively here.