I held out long enough. Since BMW’s move to Paragon from Kyosho as the choice manufacturer for the BMW brand replicas, I had yet to purchase one. Well, this weekend I scored my first Paragon model, the dealer edition BMW M5 (F10) in Silverstone II finish. Yes, I know Paragon has been producing some BMWs for the last several years, but I thought this review might help others who like me were on the fence for so long. 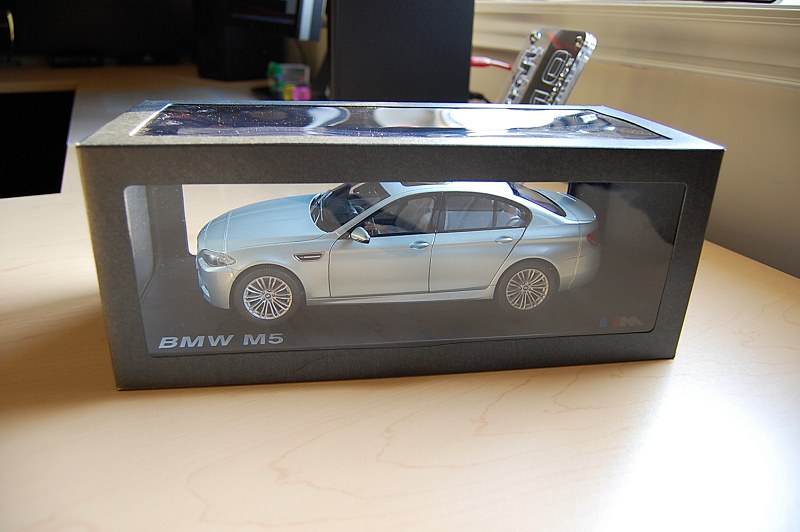 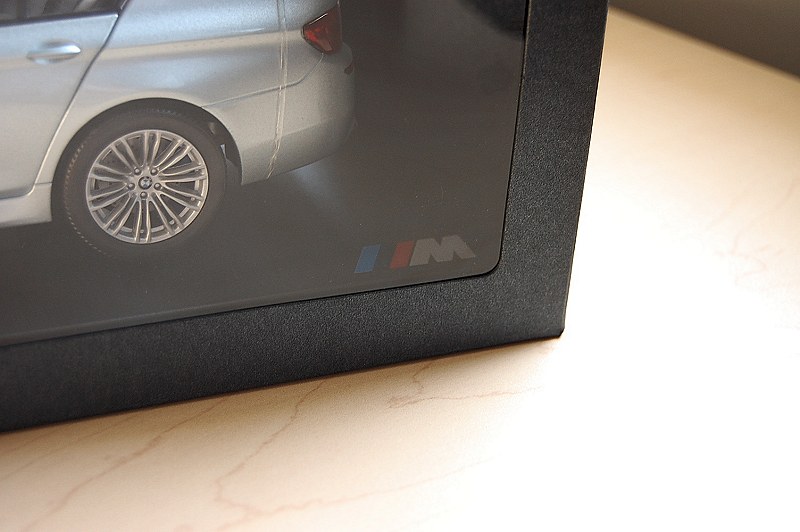 Since this is my first Paragon review, I will start with the packing. Nothing really to it, other than a paper exterior box with an internal plastic skeleton. The front hood and rear hatch are both secured with rubber bands as are the doors, which is similar to AUTOart’s methods. I’d like to point out that the quality of materials and presentation are very good. The entire package works well together. If I had to compare, it would be measured against AUTOart’s Performance series, but definitely a step above. 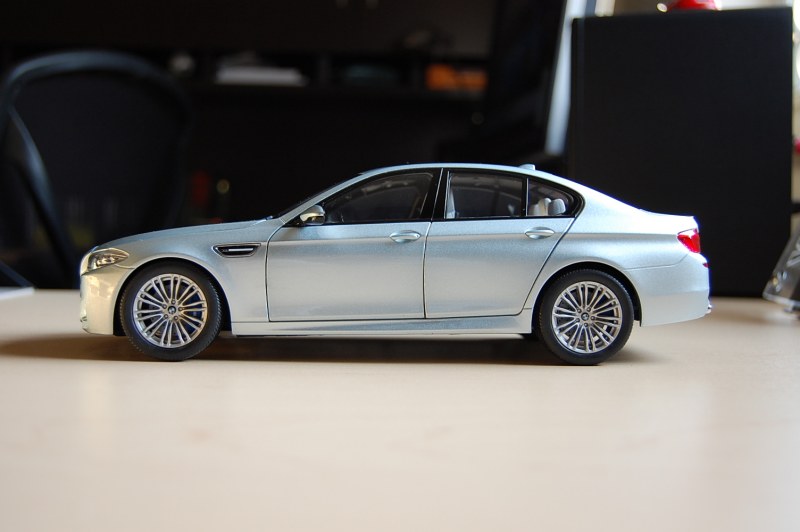 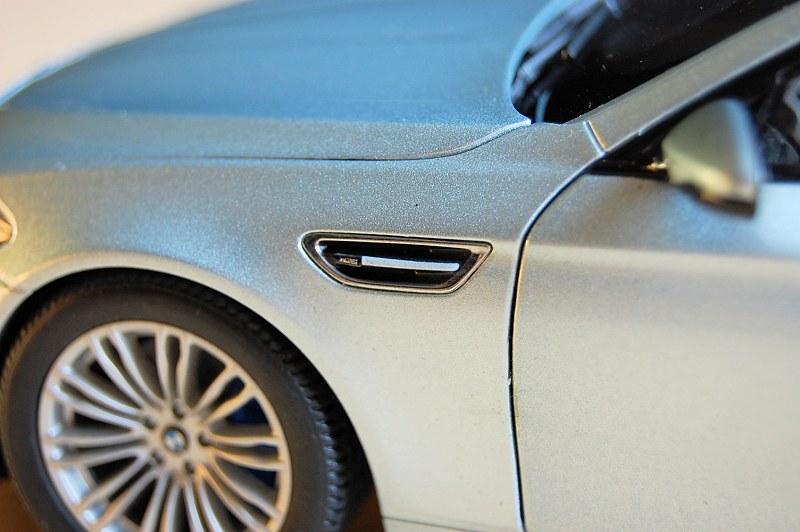 The first thing that strikes you about the model is that it’s bigger than I anticipated. Remember, we’re talking about the M5 here, not M3. Weight is good, since it means there is actual diecast metal in the construction! Overall body lines seem to capture the original well based on the images I studied. Kudos to Paragon for capturing the styling ques on the new M5 – especially those found on the front hood and sides. Well done. Panel gaps and shutlines throughout are quite good. The front side inlet/indicator light is a unique feature to the M5, and again, Paragon doesn’t disappoint here with their level of detail. 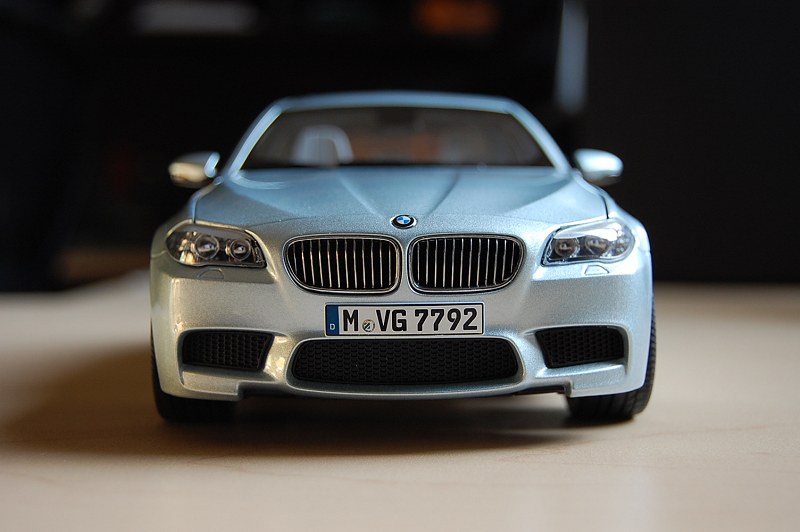 The front fascia is nicely detailed and captures the original for the most part. Maybe a slight miss on the lower chin spoiler just under the left and right intakes, where depth and angle could have been more defined. The BMW logo front and centre is 3D, which I like. Front grilles are perforated, but are not on the lower three sections. At this price point they should be. Headlight detail is good but not great. 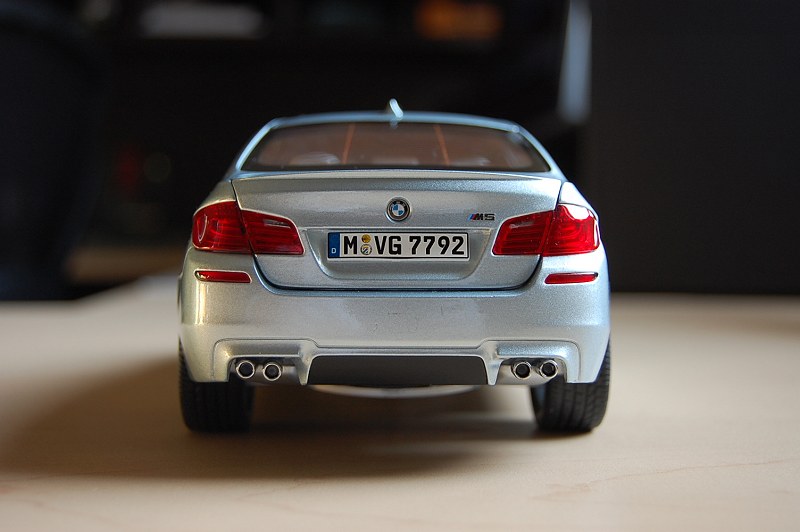 The rear is more of the same. 3D logo is found again, and the addition of European plates rear and front are a welcomed addition. Taillights are good, but could use a little more definition. 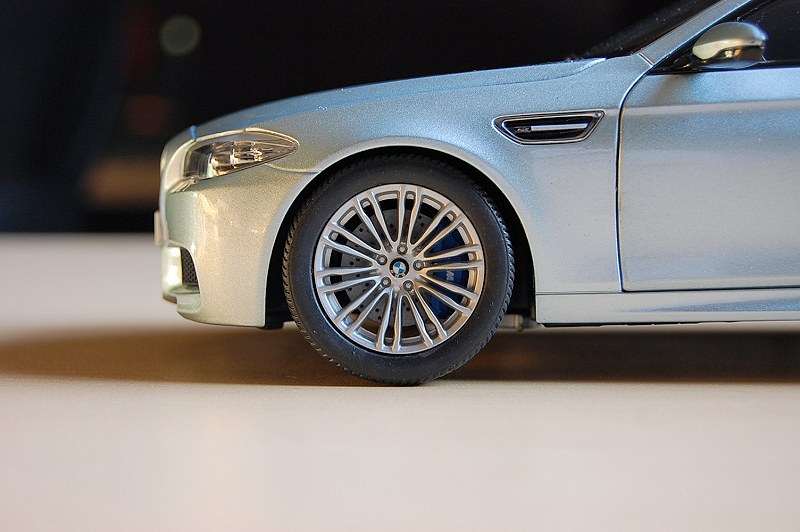 The Paragon M5 is equipped with a working suspension, which is a nice bonus. The wheels are nicely executed, though I would have liked a more aggressive wheel set for an M5 (larger diameter). Paragon’s attention to detail to the wheels with blue calipers and cross-drilled rotors do make up for it somewhat. 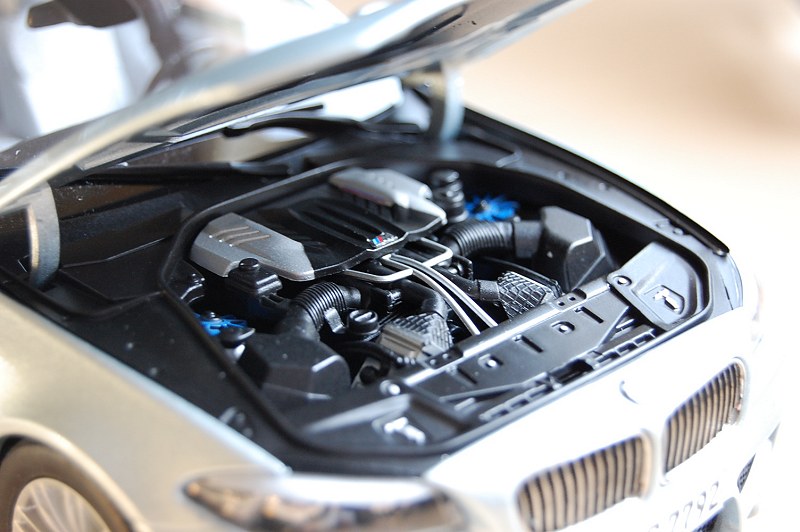 The Paragon M5 allows access to the rear storage and motor. Engine bay is nicely executed and provides enough detail to overlook some of the exterior shortcomings. Though the big bulky hood hinges should be something for the Paragon team to address in future releases. The rear storage features wall to wall carpeting but the opening angle of the hatch is too small for my liking. 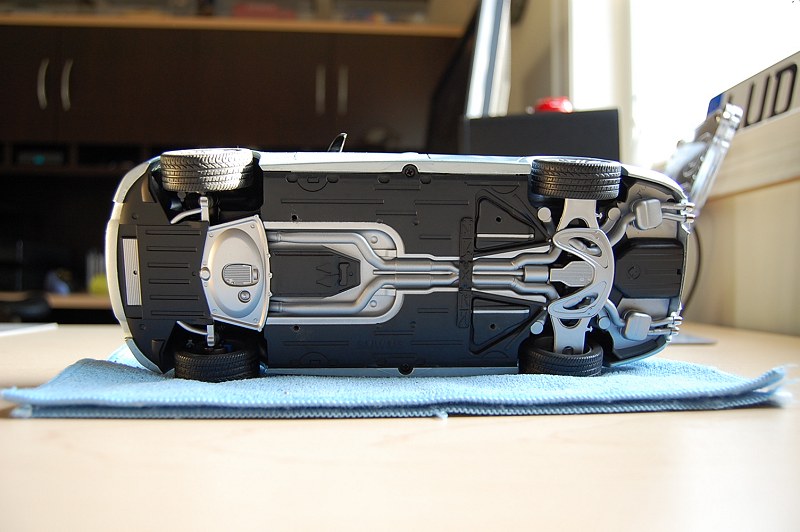 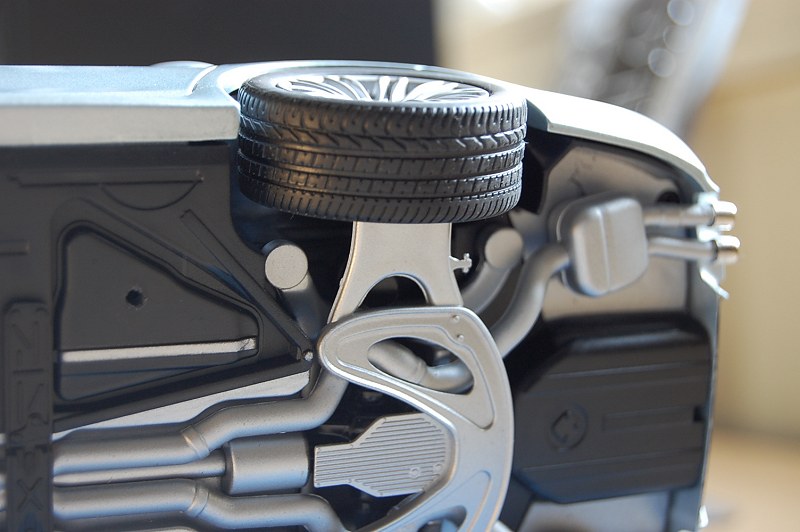 The model excels in undercarriage detail. Front and rear suspension components are clearly defined, as is the exhaust system. An unexpected find, but one that is very welcome. I’ll let the photos do the talking…

The interior detail is very good, almost on par with Kyoshos of old. All four doors allow access to the cockpit, which is nice to see. The dealer edition is treated to a two-tone interior in black and white. Carpeting is found throughout, and all the luxuries and sportiness of the M5 are here; even the optional television monitors are found in the headrests. I love the quality of the seatbelt fabric and buckles – provides another level of realism. If I had one complaint, I would ask the Paragon team to turn the notch up a little on the material used to fabricate the interior. This would move their interiors from very good to exceptional! 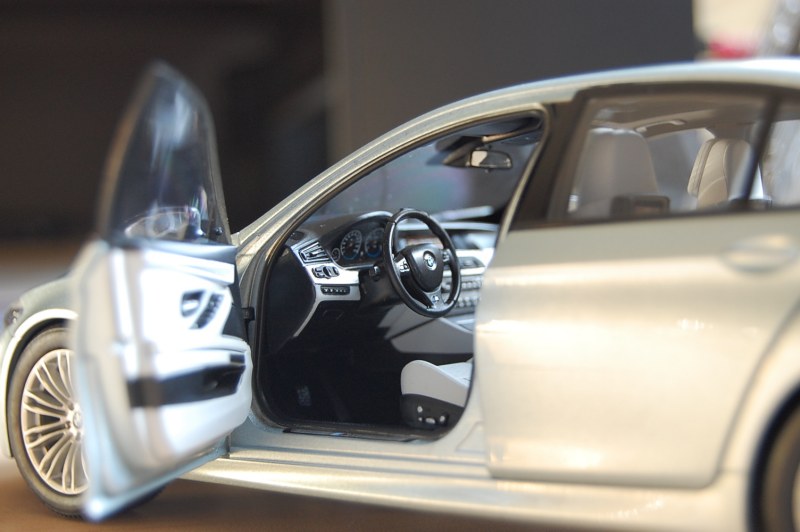 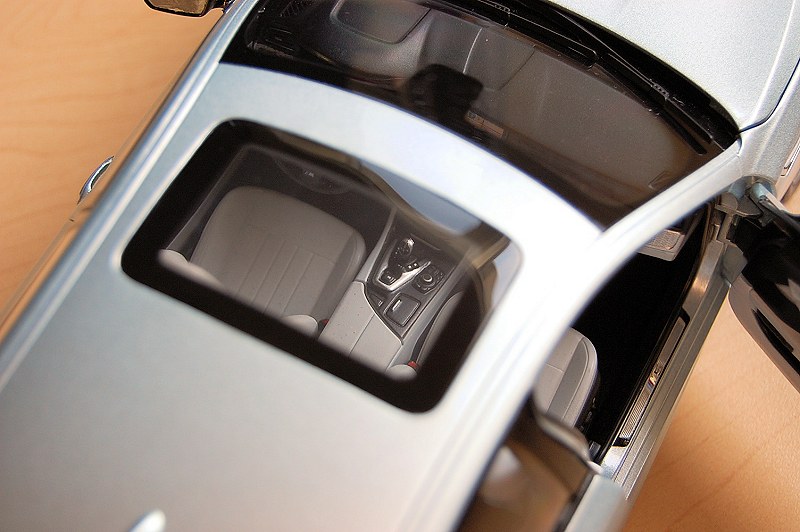 So there you have it. I faced my fear and it definitely turned out for the best. Paragon’s M5 package is very good; anyone who may be still sitting on the fence, rest assured, they have something good going on here. It may not be perfect, but if some of the shortcomings are addressed, the Paragon brand can be a serious contender for years to come. Enjoy the pics! 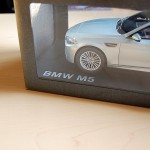 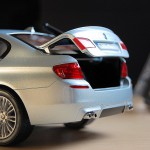 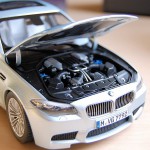 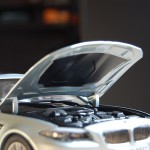 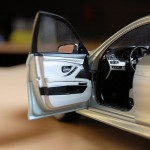 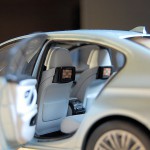 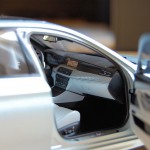 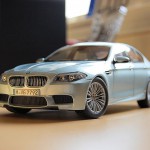 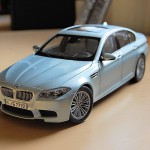 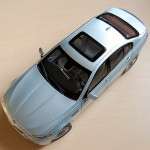 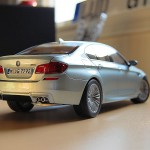 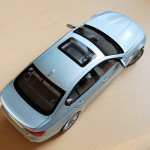 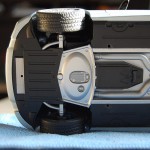 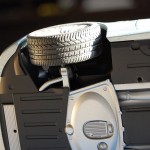 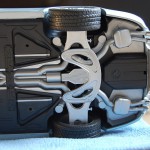