Plaid Speed – in the Spaceballs terminology Elon Musk has always been using for Tesla’s performance categories this is what defines the essence of Tesla’s next-generation roadster with which Tesla’s taking root in the car industry has come full circle. Tesla started its mission with the Lotus-Elise-based first generation roadster – a mission to prove that EVs could be sexy, not unassuming environmental ascesis, not ridiculous, but ludicrously fast even in family sedan shape, shaming supercars – at least as far as acceleration was concerned. After sufficient funds had been raised and the Tesla vehicle family has grown by the more usable, the more affordable, the more off-roadable and even a haulage solution for the planet’s problems, Tesla tries to show that it can even do plain purposeless performance better than the best in the petrol posse, accelerating significantly faster to 60 mph and 100 kph than any production petrol car and being fast on Bugatti’s and Koenigsegg’s heels in the 250 mph/ 400 kph plus league, while being cheaper and offering more everyday-usability. 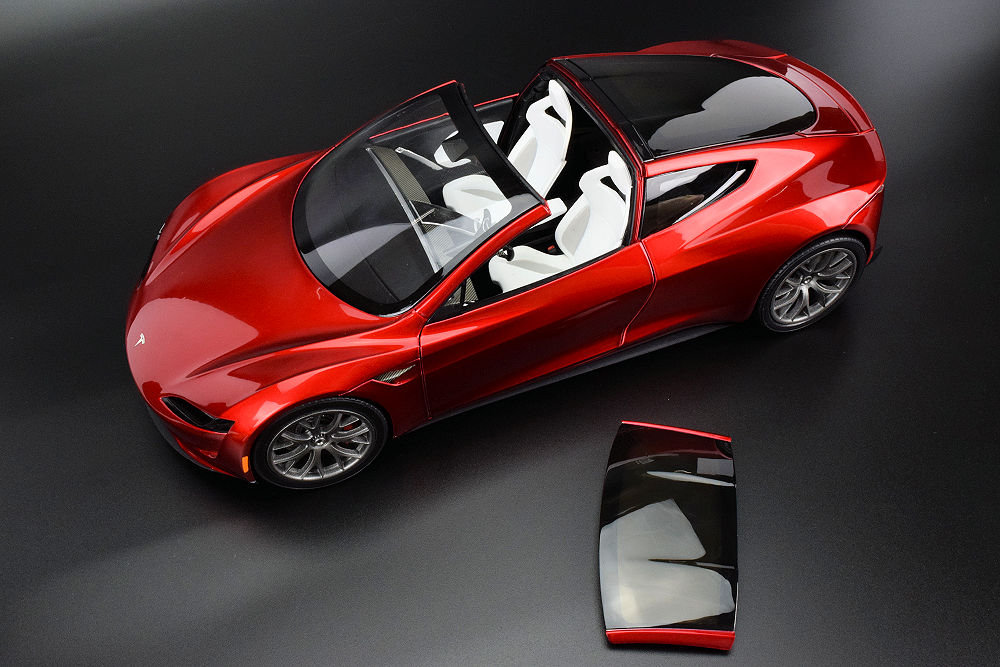 With the real thing being late, Tesla has just put the 1:18 model on sale very recently … and like hot cake it’s sold out after a week. Unfortunately, Tesla only sells inside the U.S., so that global enthusiasts need to be extremely lucky and their pockets well-lined to get one from the usual sources where scavengers put some of them at around twice-the-original-price re-sale as if 250 $ wasn’t expensive enough. 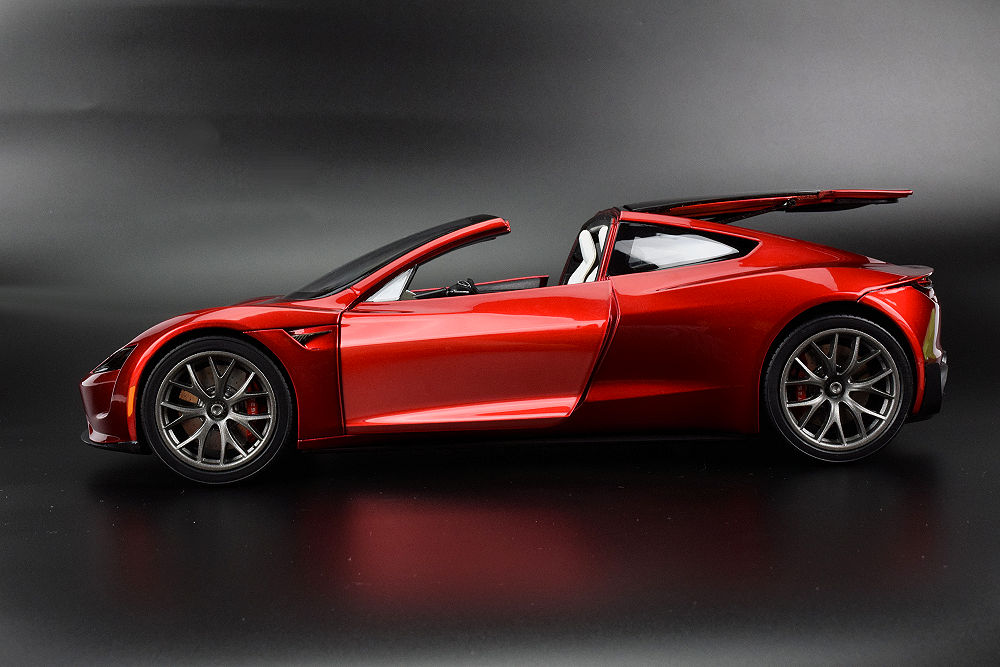 What do you get? A reproduction of the very concept car that put the icing on Elon Musk’s unveiling of Tesla’s semi-trailer (probably knowing that attention for a truck would only go so far), same colour specifications in- and outside. The rich multi-coat red is as beautiful as ever on the other Tesla models and I could find hardly any blemish other than a somewhat darker red spot on the hood that, like the real deal, does not cover any frunk storage. 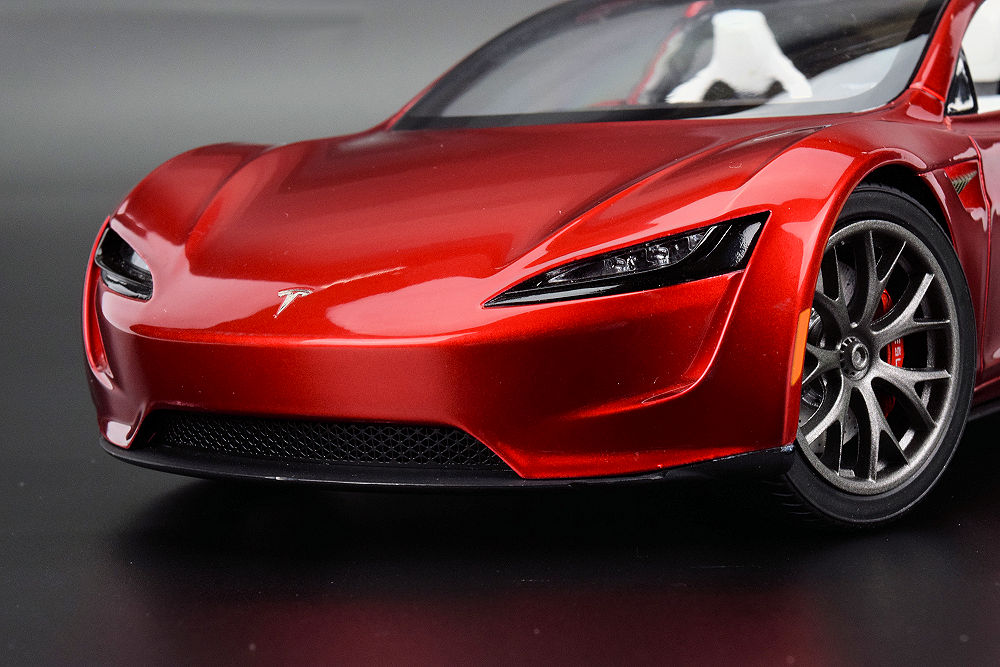 The front end is adorned with a photo-etched Tesla logo, while the rear end bears the Tesla script in photo-etched letters to identify the manufacturer. Underneath the front lip, a perforated finely patterned mesh sucks up air and on the rear, a plastic diffuser is mounted to an otherwise all-diecast-body. The headlights’ triple led-lenses are convincingly moulded in silver plastic behind clear lenses while red reflectors are mounted in the diffusor and delicate blades inset into the rear corners represent the taillights. 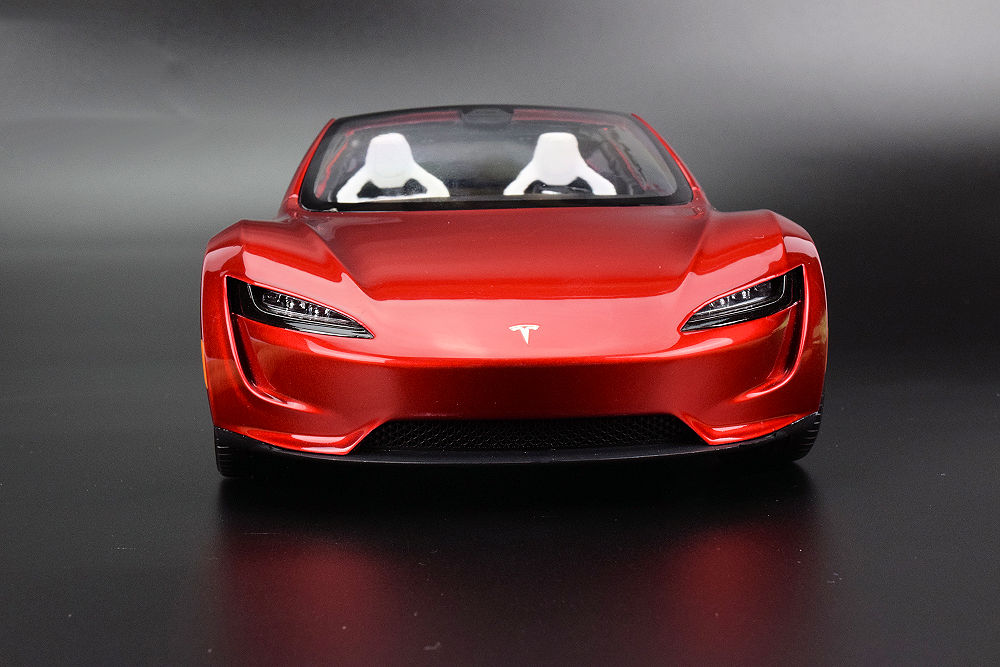 Behind the front wheel arches, side blades are reproduced with a carbon fibre pattern. Sadly, the side markers in on the edges of the front wheel arches are only non-reflective print-on. The rotors are matt- black with Tesla-badged red calipers and drilled brake-discs all around, but without branding on the tyres. 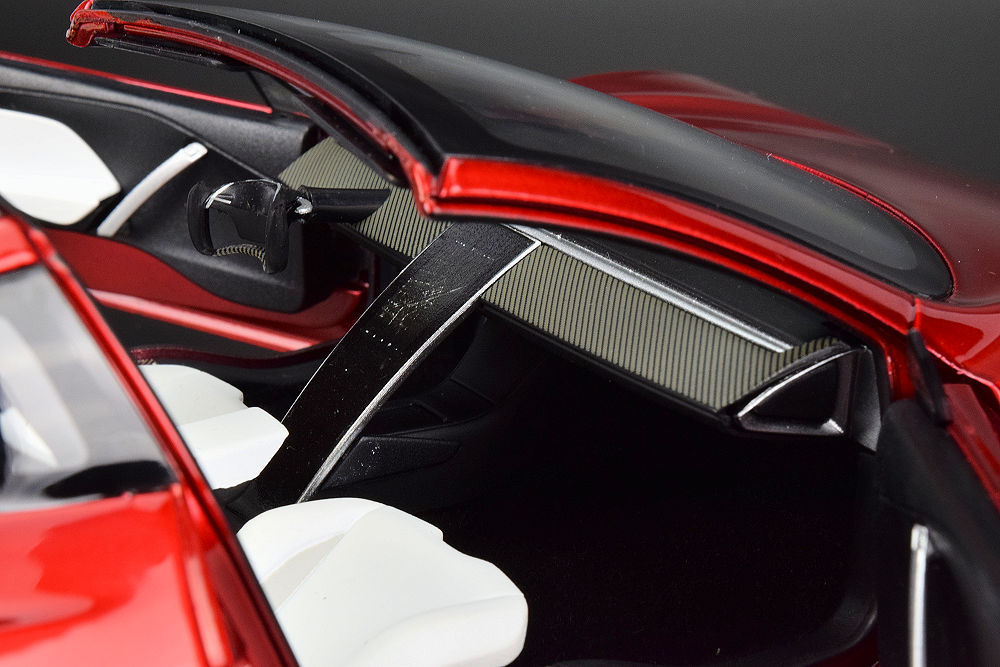 True to the original, access to the cabin is through the handle and, except for the triangular quarter-window, window-less doors to underline the roadster character. Inside, you have got the same white seats that brighten up the modernly sparse interior. Like on the original, you find the airplane-like carbon-pattern steering bearing the Tesla-name-script mounted on a plain, un-instrumented carbon-pattern dash and a giant tablet mounted in the Aston Martinesque floating centre console that displays the very same map of where lucky members of the unveiling audience were given a ride to experience the mind-blowing acceleration. In the carpeted footwell you find to pedals underneath the steering. It’s all so minimalistic that you would expect the absence of seatbelts like on so many other model cars nowadays, but no, far from being neglected the fabric belts complete with photo-etched buckles hang idly beside the front seats. This being a 2+2 seater, the initially folded rear bench unfolds. 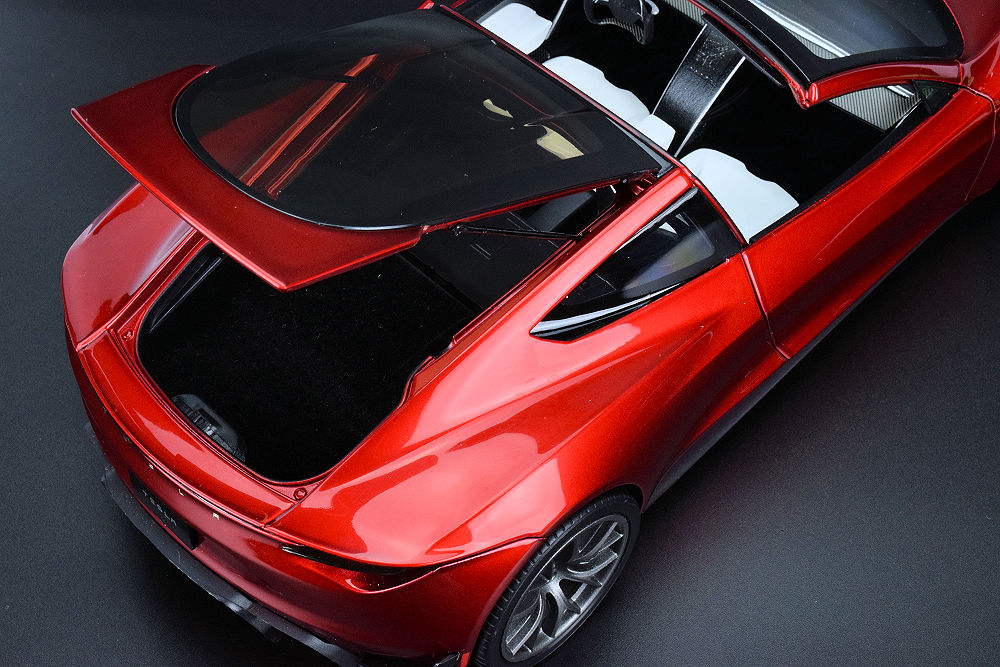 Access to the rear luggage compartment through the hatchback can only be achieved with a single method. The seasoned collector may have an array of opening tools formerly provided with other models for which they usually weren’t necessary to make entry. None of those works, though, the panel gaps of this diecast being so tight that you wonder why AUTOart feel they need to resort to composite and ask the same prices. If anyone has found any other way than poking one finger into the boot through the gap between the seats to push the hatch open from the inside, let us all know the secret. The good old release-push-button underneath the model would have been a welcome feature. But once a gap has been pushed, the hatch will beautifully rise on struts, revealing little else than a carpeted boot. And of course, the smoked -glass roof panel to turn the roadster into a no less beautiful coupe in a snug fit. 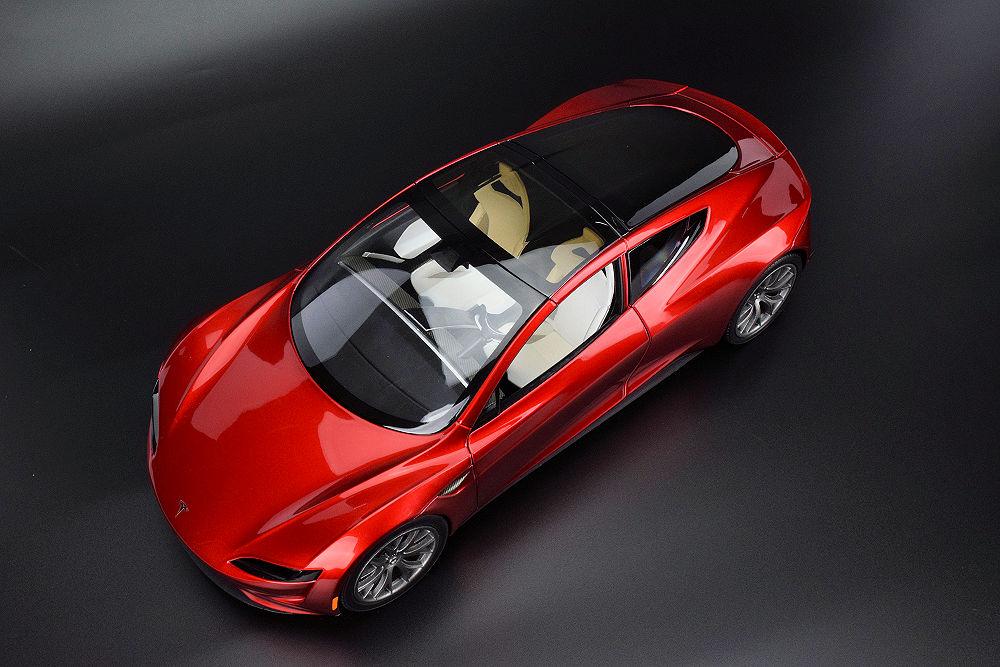 Not bad as a dealership model, especially when manufacturers like Bentley start sourcing their latest 1:18 scale diecast Continental GTC from Norev. Compared to Almost Real diecast efforts, though, even the original retail price of this model seems somewhat steep and it’s more the hype and enthusiasm about the original that sells it. Maybe this self-conscious confession is some consolation for those who can’t add this to their collection for one reason or another.