Under their Concept 18 brand BBR is introducing a new Porsche 356A 1955.  The model is completed in resin and features closed-body design.  Four colours are initially scheduled for release, each detailed below.  There is also a premium version with display case available.  Pricing starts at 210 Euro.  Though the initial images are good, we think BBR is little for the game…  The market is saturated with Porsche models, many featuring the 356, and many better priced!

About the Porsche 356…  “The Porsche 356 is a luxury sports car which was first produced by Austrian company Porsche Konstruktionen GesmbH (1948-1949), and then by German company Dr. Ing. h. c. F. Porsche GmbH (1950-1965). It was Porsche’s first production automobile. Earlier cars designed by the Austrian company includes Cisitalia Grand Prix race car, and the Volkswagen Beetle as well as Auto Union Grand Prix cars were designed by the German company.” 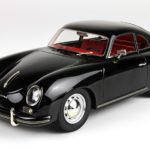 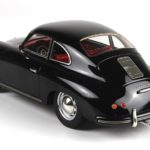