The latest version of the Ford GT has been in the hands of some lucky owners for some time now.  For us scale model fans the wait was a little longer for an example that provided full 360 access, this model comes via AUTOart.  The latest iteration of the Ford GT takes a completely different approach from the last version.  Styling, for one thing, has taken a completely new direction with racing being a priority with design.  The power is tuned by Ford’s turbocharged EcoBoost V6.  Ford’s V6 is not to be dismissed, it provides supercar numbers.  Top speed exceeds well past the 200 mph barrier, 216 mph to be exact! And how many other cars can say they won Le Mans?  Not many!  So was the wait worth it? 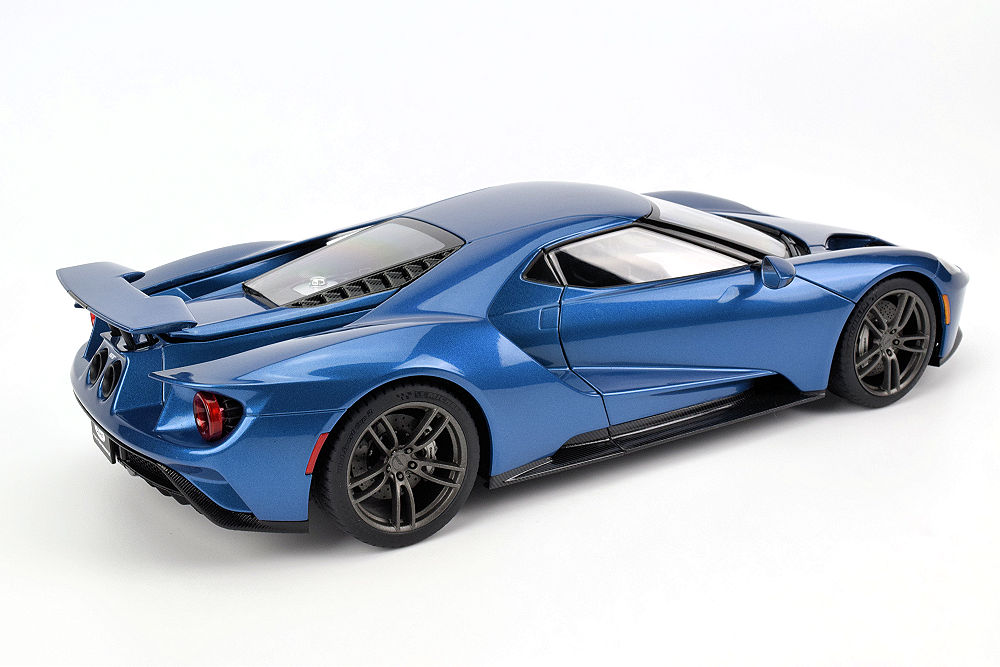 The exterior colour we went with is called Liquid Blue. One thing you immediately notice is the lack of stripes down the centre line of the car.  Some appreciate the clean look, we personally live on both sides of the fence, the Blue exterior was more important in the end than having the decals.  For those who crave the stripes, there are other colour options that include them.  See the AUTOart news feed on the website or use the search feature to learn more about the available colours.

From an exterior perspective, we’re really impressed with the overall execution.  AUTOart does a great job of capturing the styling cues and design of the Ford GT.  Cool features include perforated metal on every opening on the exterior, no solid plastic bits here! 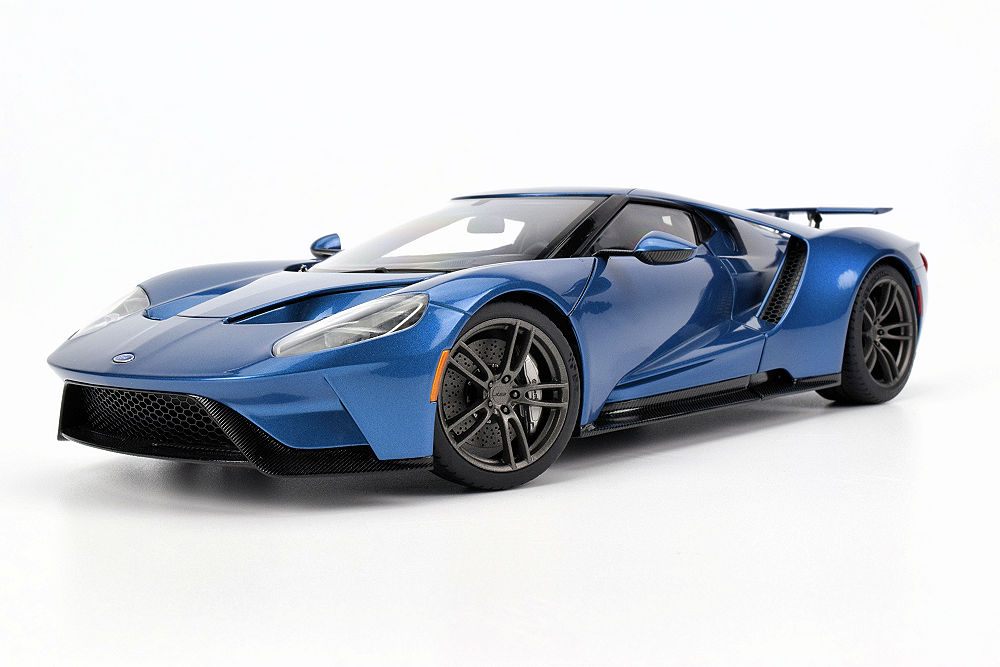 The paint application is excellent throughout.  No areas are too thin or too thick on our example, a perfect balance from front to rear-end.  However, some of the carbon fibre elements are executed in the typical AUTOart moulded blend.  To be honest we’re not huge fans of this applied method, more on this as we investigate the various sections of the model.

Moving to the front of the Ford GT the sweeping nose is dominated by two large intakes on top with massive headlights on the corners.  As mentioned earlier the open areas are crafted with perforated metal grilles, nice to see the detailing of cooling fans behind.  Headlights are another slice of art, in 1:1 form and scale, AUTOart does a terrific job here. 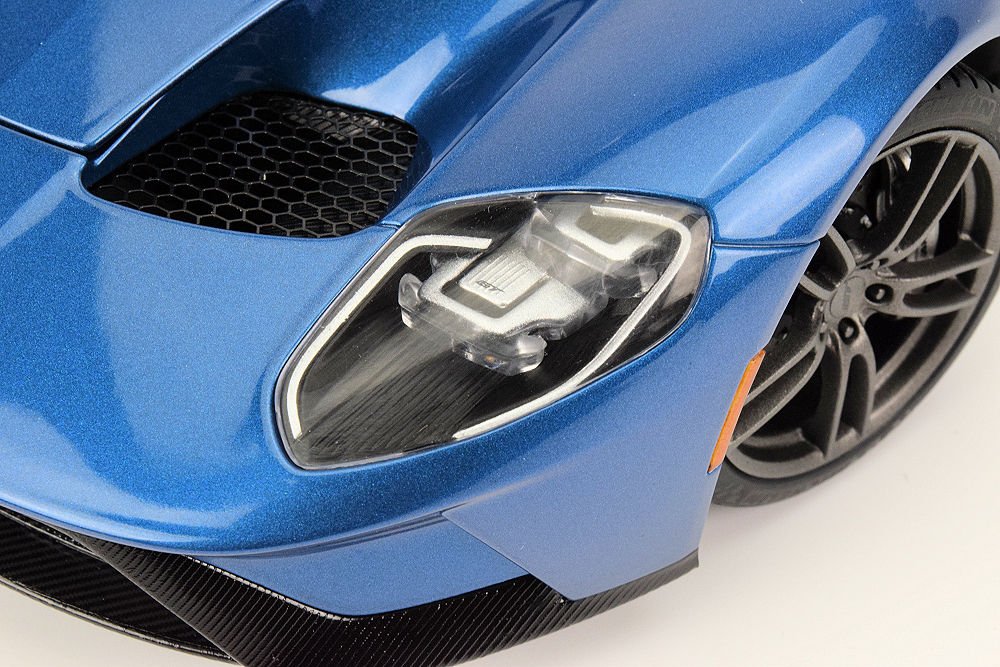 Moving to the lower section of the front the large opening is again caped with perforated metal.  The lower chin spoiler section is completed with a carbon fibre decal.  It does look the part.  Where it fails is the use of moulded carbon fibre on the lower side sections of the outer spoiler.  Why AUTOart shifts gears here is somewhat puzzling.  Final comments on the front, the Ford emblem is completed with a 3D like piece. 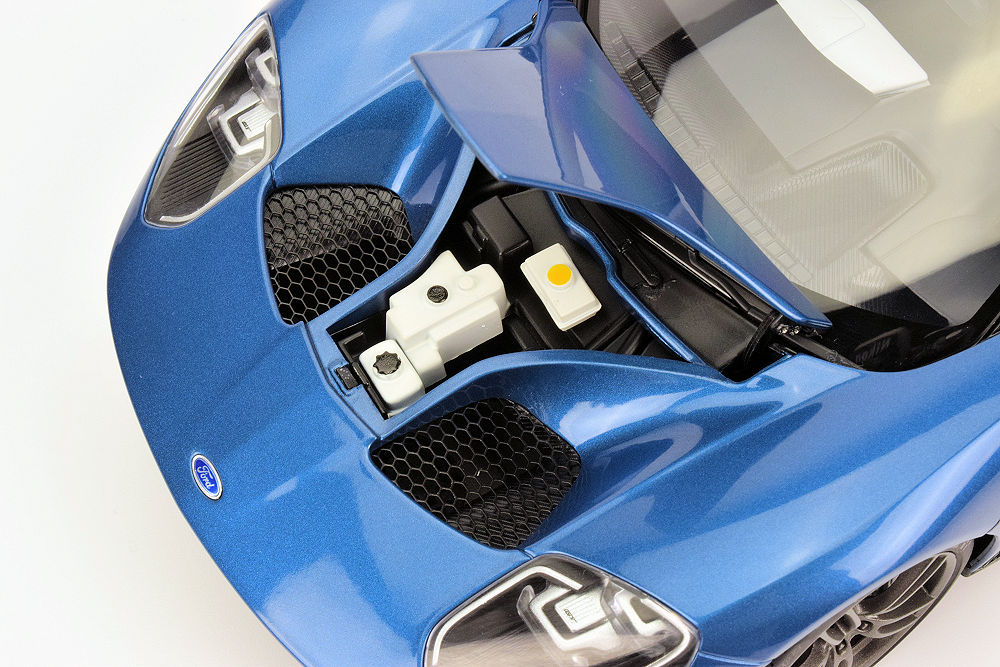 Access to the front section is available.  The function of the hatch open and close feature is excellent and shutlines and panel gaps are terrific! Missing inside is the hood prop found on the 1:1. And the level of detail of the components here is somewhat suspect, to say the least.  The standard of detail is poor in comparison to the 1:1 – various components are missing.  And what AUTOart decides to present isn’t on par with the exterior excellence of the model. 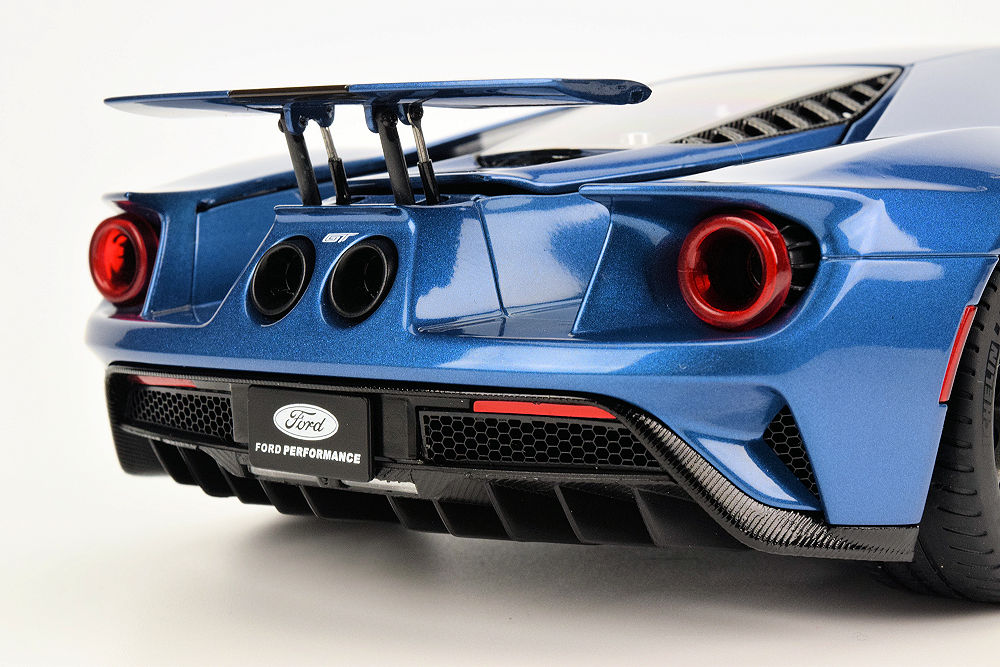 Moving to the rear the replica is even more impressive!  The design of the blades on either side help channel air for cooling and provide downforce.  All intakes and openings are capped with metal grilles as they should be.

Another neat feature on the AUTOart replica is a functional rear spoiler.  The release button is found underneath a simple push activates it,  Unfortunately, there is no pivoting of spoiler front and back, the action is up and down only. 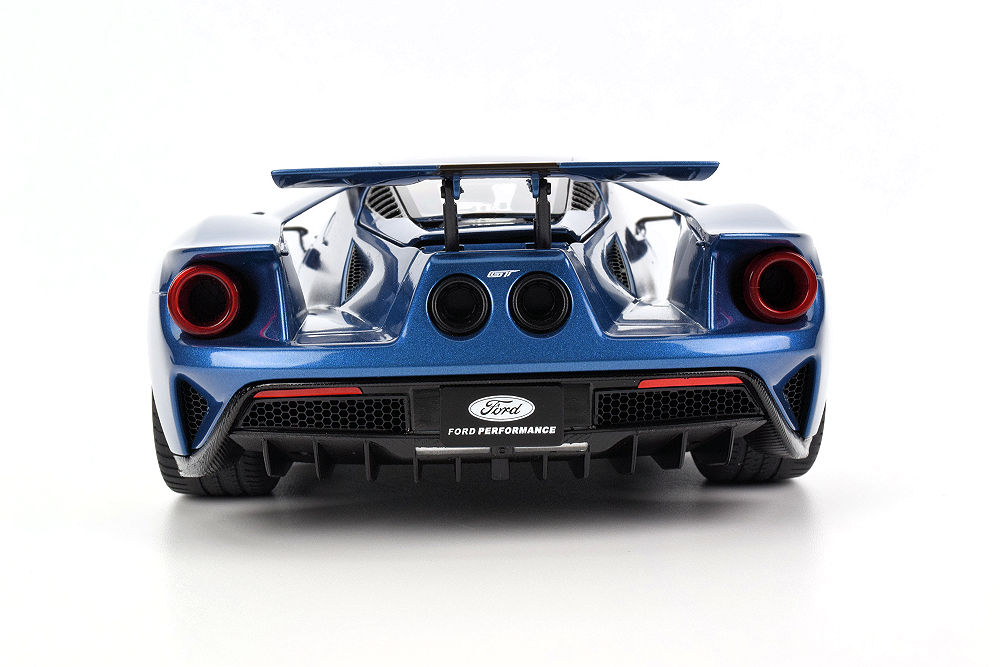 The dual exhaust tips are as much of the exhaust system you will see on the Ford GT.  Both are executed with care.  Taillights are beautifully crafted and functional on the 1:1 – helps channel hot air away from the motor during track days.  Looking inside the taillight AUTOart chooses to implement the open grille with solid plastic.  Not a huge loss as these grilles can’t be seen from the exterior sightline. Finally, the GT logo is completed with a simple flat decal, this should lean towards a more 3D like piece as AUTOart presented on the front.

Motor access is available here.  The up-sweep motion is flawless in our example.  Note the single strut passenger side, this is accurate to the original design.  Also, the single-piece clear glass does not show the cooling vents/holes, we believe this is a new production change for the 2019 model year. 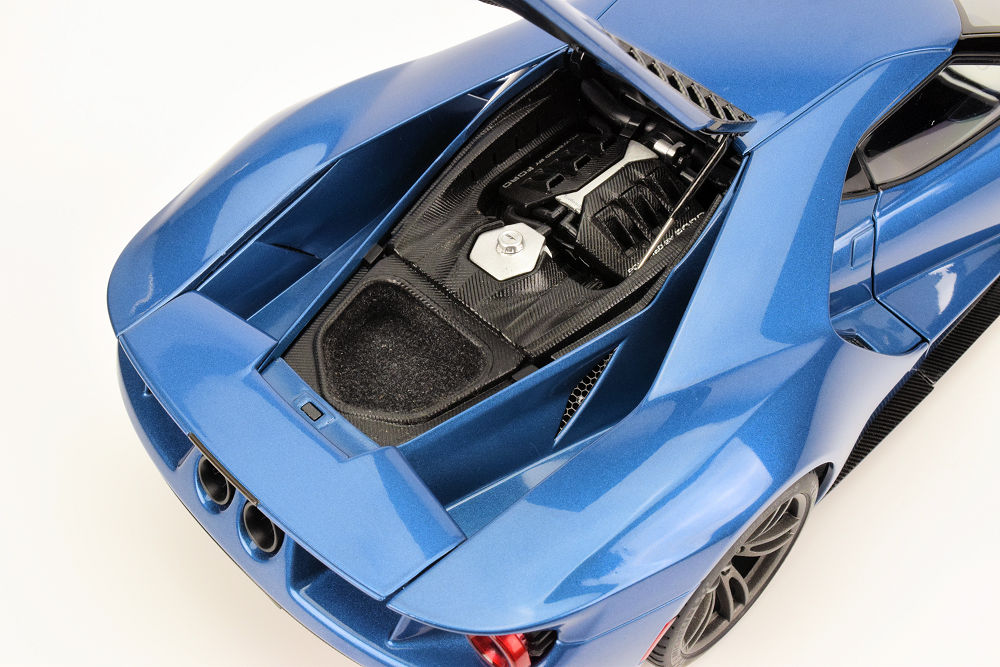 As for the motor detail it is lacking in the basic finish department.  What we mean is there is little to no attention to the small details, for example, the hose clamps front and rear. A little paint defining the clamps would go along way!  Decals include “Powered by Ford” on the sides of the intake, “EcoBoost” on the lower section of the motor and the “GT” logo is found on the oil cap centre.  As for the surrounding shroud and intakes, there is a sheen to the finish, whereas the original is more matt looking in appearance.

The only storage found on the Ford GT is just south of the powerplant.  Nice to see the area completed with flocking.  However, the straps that hold the Ford provided battery charger and compressor are not found. 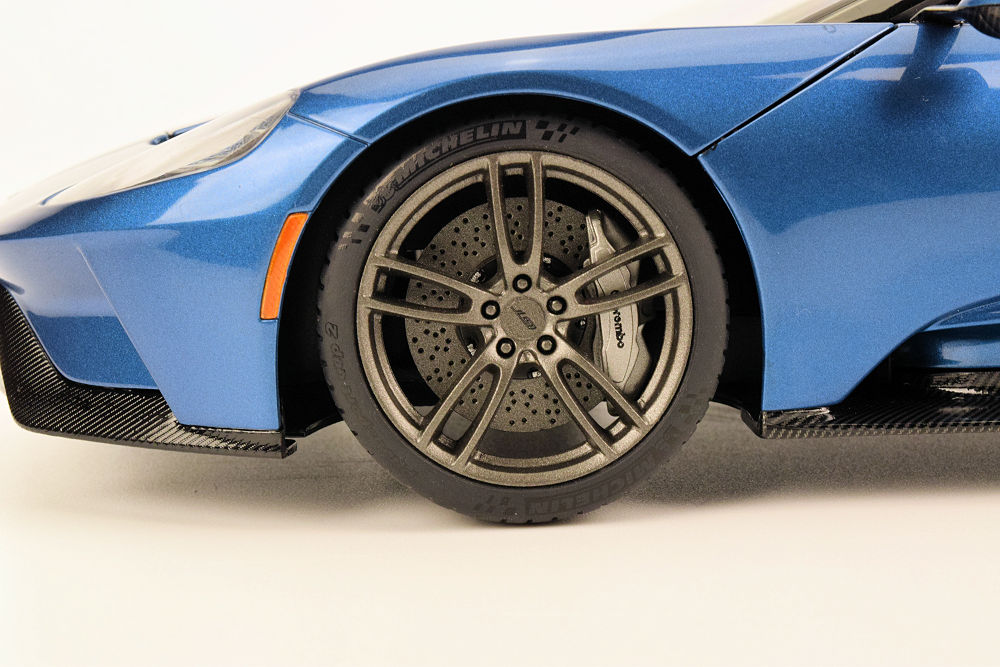 Wheels are a work of art on the Ford GT replica.  Nice use of paint and texture complete a very realistic package.  Massive rotors and calipers with Brembo logos are in check.  Even the perimeter of the tires has the true authentic script.  Well done!

Access to the interior is completed with up-sweep doors.  The function and operation on our example were perfect on both sides, also each held its position in the open swing without issue.  Lower sections of the exterior doors are completed with carbon fibre decals.  It definitely looks the part! 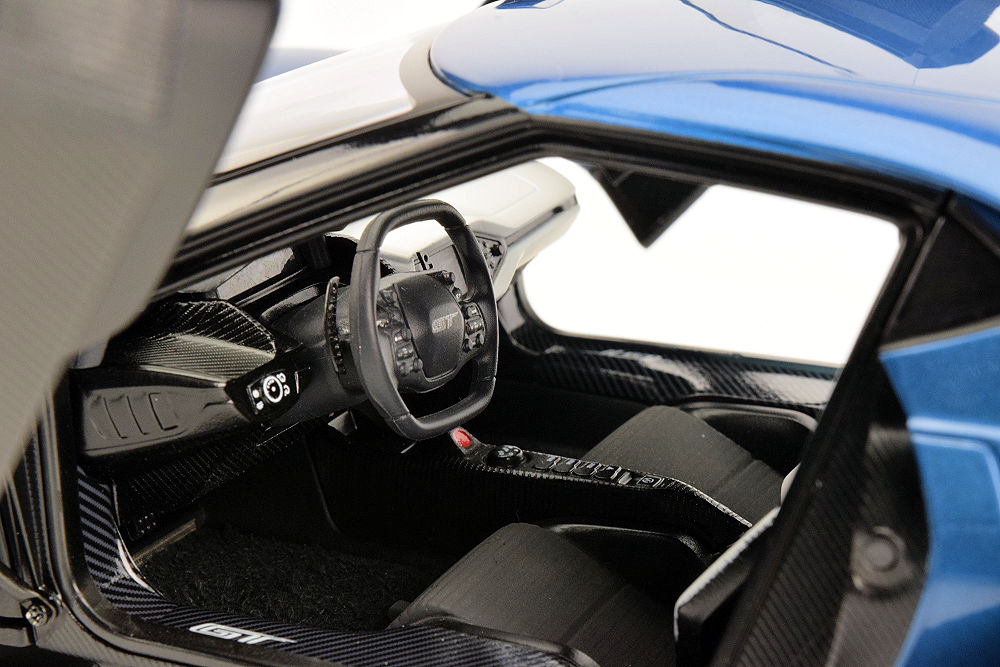 The backend of the door opening adjacent to the door should have a grille feathering debris from accessing in the motor.  AUTOart chooses to ignore this.  Also, a major styling component of the GT’s interior based on space challenges incorporates two massive vents on each door.  The level of execution here is very poor and not up to the exterior standards.  We don’t see the racing harness option or standard seat-belts either.

The remainder of the interior incorporates all the elements one would expect to see. What we like most was the lining of the interiors’ tub with authentic carbon fibre look – this is completed with decals as opposed to the moulded option we discussed earlier.  Nice attention with the flocking found within the footwells, elevates the realism factor.  Also, the White accents bits in the dash and seats add a splash of colour to stark and static interior colour trim. 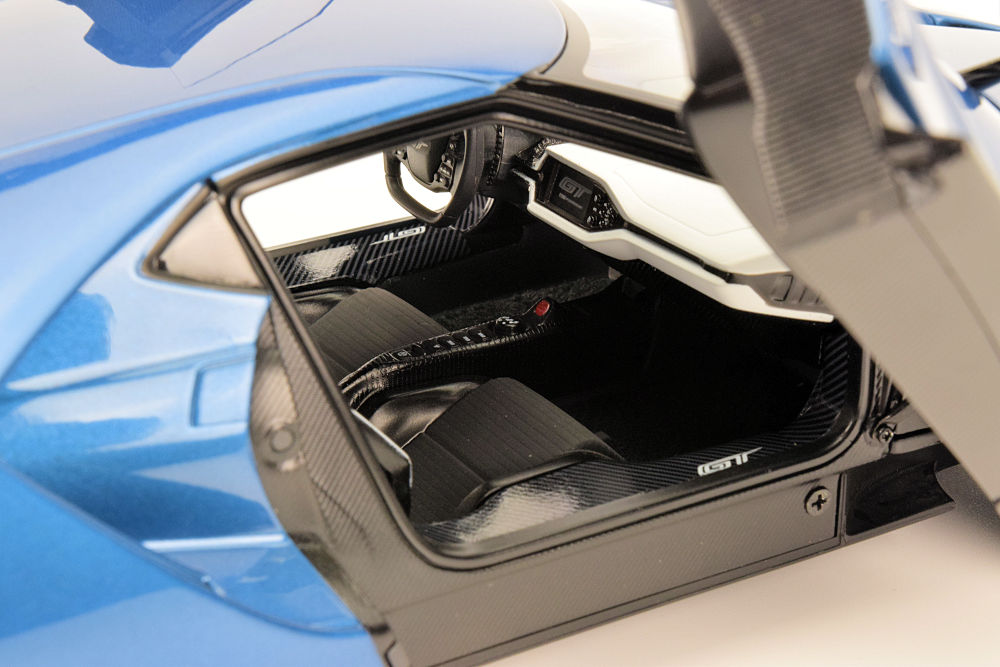 Interior items we think could use a little more improvement based on price point include the overall aspects in the dash and steering wheel.  Most of the driver functions are found on the steering wheel but we find AUTOart’s effort somewhat lacking.  A little texture and a more definition would help here. 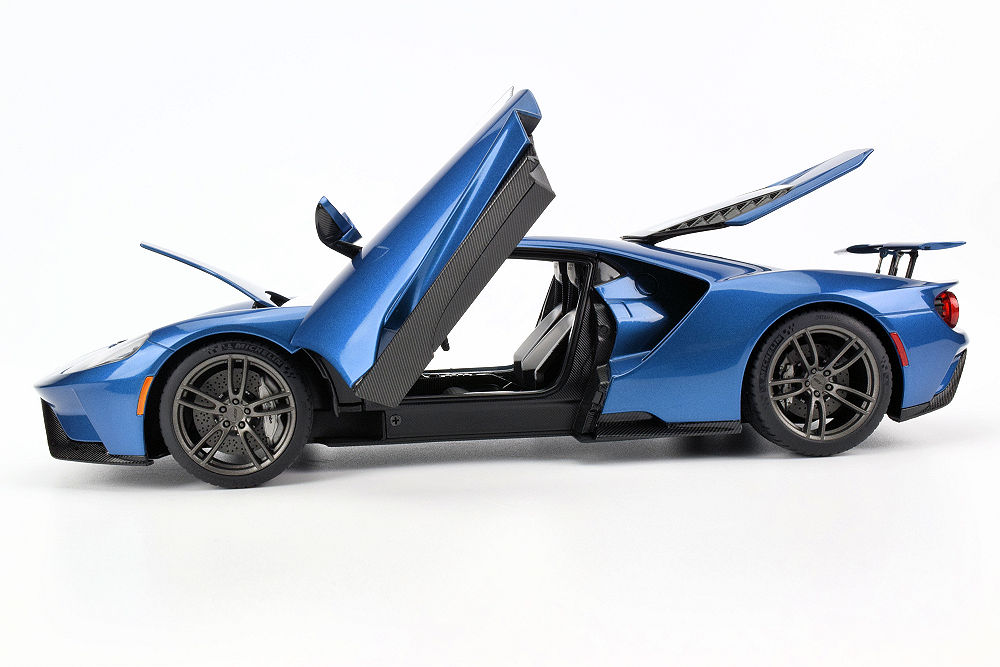 The AUTOart 2017 Ford GT is a great model, though a great model from an exterior point of view.  Highlights include the overall shape, fit and finish, and paint.  The sum of full 360 access with functional rear spoiler definitely adds fuel to the fire for one who desires it in their collection.

Where the model lacks inspiration is in small inner working – for one, lack of detail underneath the hatch, motor and interior elements.  They are there and present but barely say hello. The flip side should be true, each element should scream look at me!  The collector should be wowed on levels.  With a little more awareness of the secondary elements we mentioned, this model could have moved from great to excellent.  AUTOart should you hear our prayers…  Listen, adjust, and please execute.  Enjoy the pics!