In August of 2014, the extended team reviewed the awesome hypercar of the Koenigsegg Agera by AUTOart.  Back then there wasn’t a lot of talk about resin, composite and whatnot, the models for the most part coming to market were still actively made in diecast metal.  Fast forward to 2021, the tide has changed.  Most of the newness is shared between resin and diecast metal with most of the full metal examples in sealed form.  And today AUTOart has truly embraced their composite side with nearly 95% of their new models featuring the composite with a diecast metal shell.

For some this is challenging, and no matter the amount of lipstick used will sway their buying decisions.  On the other hand, there are others who understand that change in all aspects of life and also scale models are inevitable.  Change is okay by us.  But within the scale model community offering less and charging the same did not sit too well with collectors.  This leads us to the model under the microscope today, the new AUTOart Koenigsegg Agera RS! 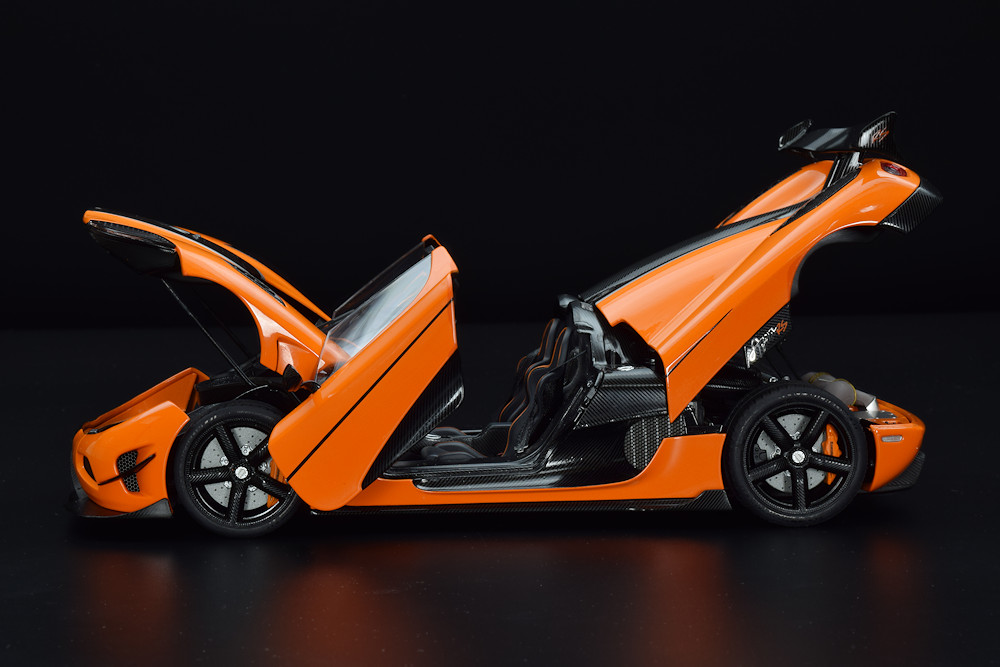 The Koenigsegg Agera RS was billed as the ultimate track car.  And honestly, the best environment would be the track!  A step above the Agera R and S, the RS, was crowned the world’s fastest production car in 2017, with a verified, record-setting top speed of 447 km/h (278 mph).  That is bonkers!  In short, these are a sample of ingredients that make the Koenigsegg name such a fellowship with fans and collectors alike.  Their commitment to speed, industry-leading technology, all equates to creating the best possible sportscars in the world.  And they look so cool doing it! 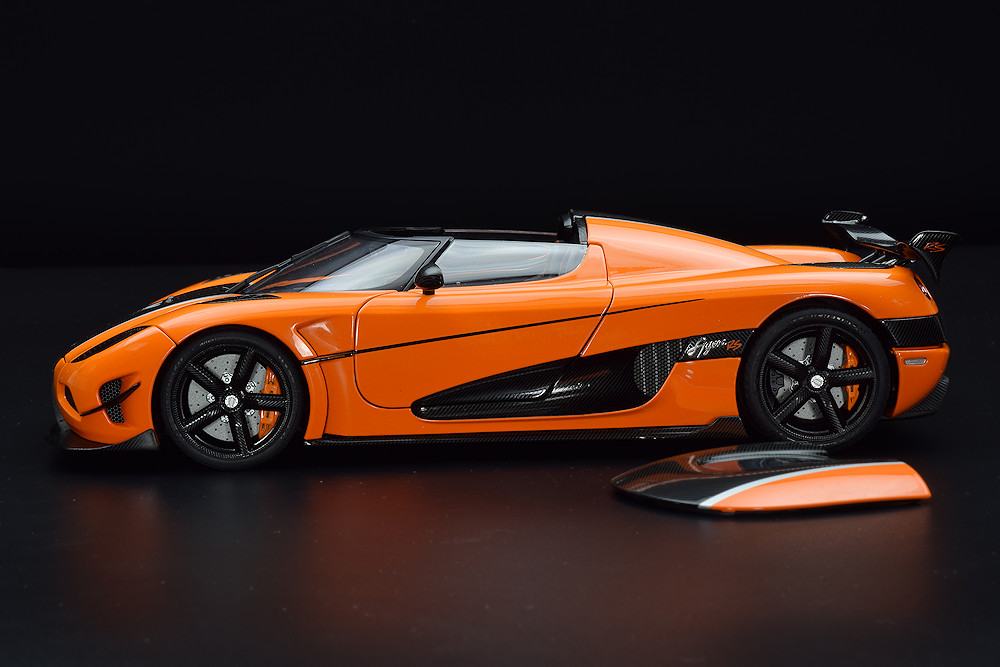 Out of the box, two things strike you immediately are the weight – the predecessor crafted in metal while the new in plastic.  In this variant, the RS has side windows, while the AUTOart Agera did not.  Additional exterior differences, the Agera RS does offer a lot more in the visual technical enhancements.  Some include a larger front chin spoiler with centre splitter and fins on lower side intakes, two additional intakes in the hood, side profiles enhancements with lower fin and finally the larger rear wing to name a few.  This might not be the definite case, the Agera or RS, in general, has many variants, most title “final” version. 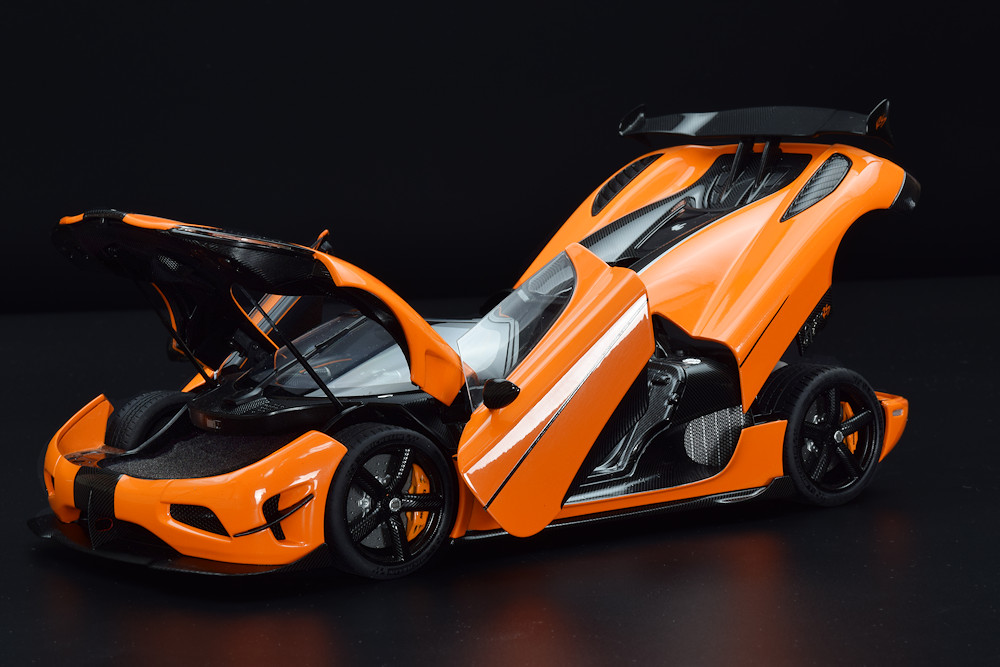 One thing we appreciate on any supercar or hypercar in this case is having an option for the unique and unusual exterior colour.  This example does that, with the Orange exterior paint called Cone Orange – a first for AUTOart we believe.  Along with Orange, the exterior finds exposed carbon fibre with Silver pin-stripping that runs front to back – happy to report the alignment on our example is nearly perfect.

AUTOart does a great job in capturing the essence of the original Koenigsegg design.  As mentioned earlier the list of exterior changes on the RS variant is nicely executed throughout.  The paint is excellent and the Cone Orange does look better in person than the published photos by AUTOart.  Carbon fibre work for the most part is provided via their tampo method.  The results here are great.  If there was one ask, possibly a slightly higher sheen in appearance… 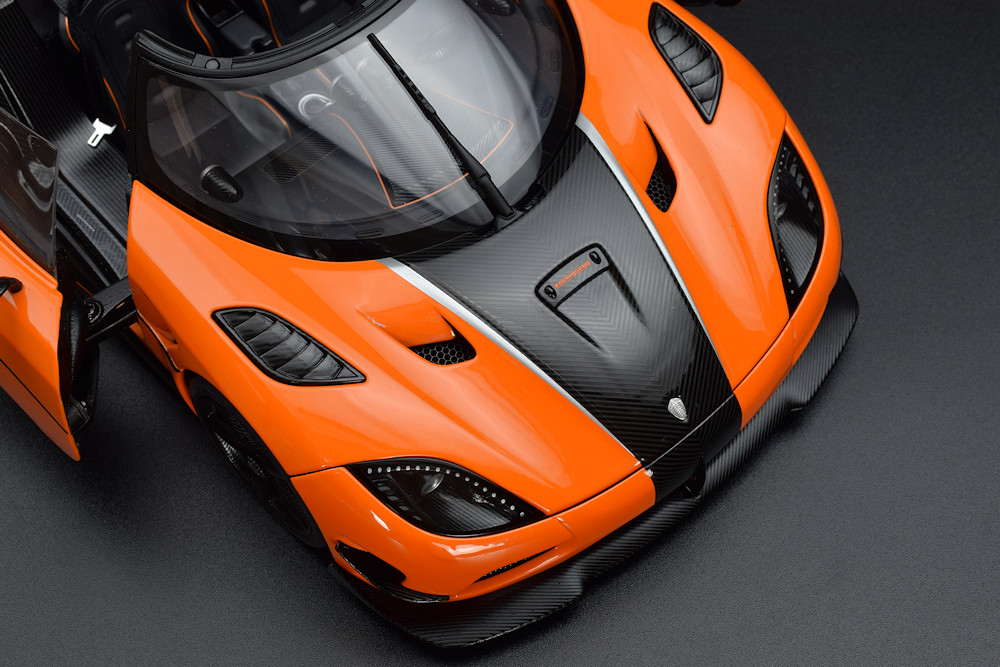 This Koenigsegg Agera RS is transformer-like, meaning each element of the car is accessible, so much so it changes the entire look of the car when fully revealed.  So how are the shut lines here you may ask?  Excellent throughout, and the doors on the Agera RS are better defined than the previous Agera we have in-house.

Moving to the front, all openings are capped with metal grilles – this includes front and sides.  The large chin spoiler is crafted in moulded carbon fibre – not our preferred method.  Carbon fibre detailing extends to the beautifully crafted headlights inside. Nice attention to detail on the perimeter surrounding LED lights. 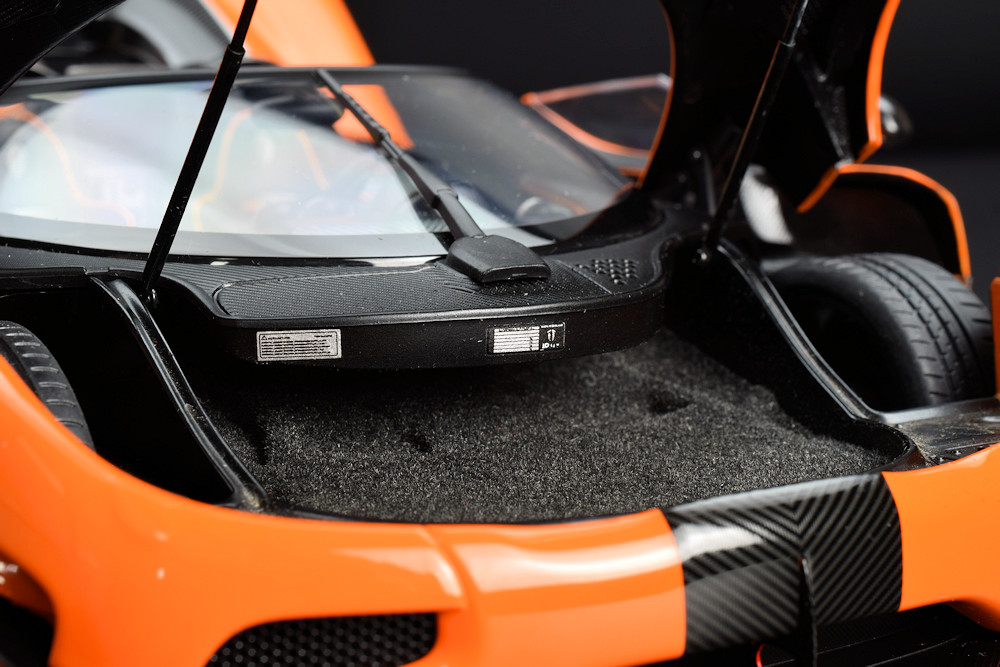 Access to the front storage is fully accessible and offers the collector the ability to store the removable roof.  We can confirm this claim does work and provides safe keeping for those that want to display the car with rood off.  We also should mention the area here is fully flocked with material that wasn’t present on the Agera release.  Operation of the hood is flawless on our example this is aided by the excellent hinge work and strut supports – though we would assume the struts are more show than support. 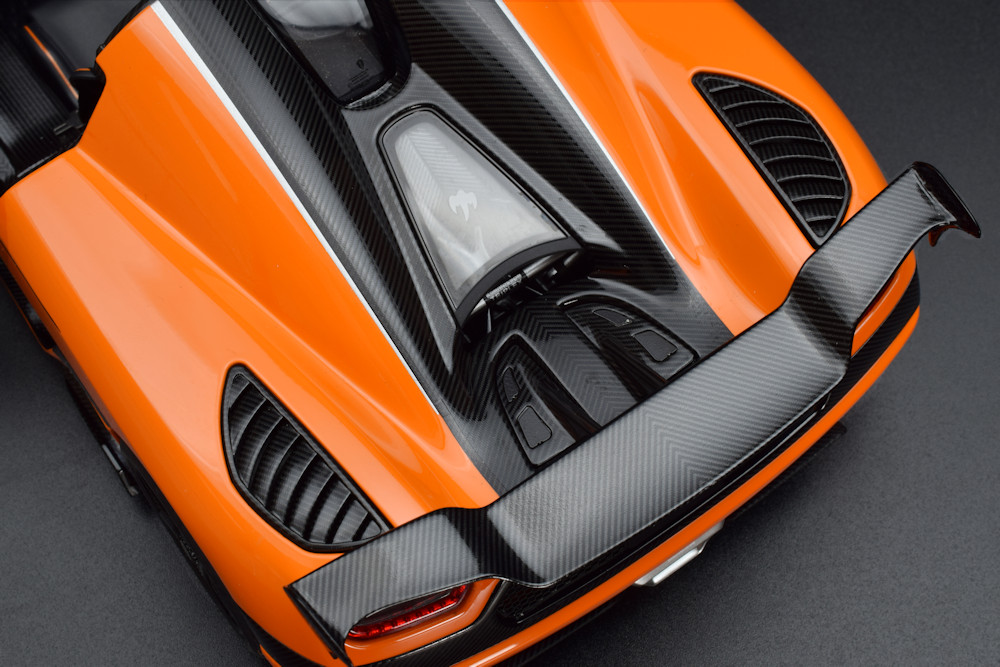 The rear is also accessible, but before we move inside let’s tour the exterior end.  Up top, the ghost emblem is found in the centre glass.  The rear grille is open to the inside, love the look of the internal motor machinery in view!  Taillights here are gems, the level of definition here is up to the model’s price tag.  The lower centre exhaust is quality too and features badging on the exterior and internal side.

Opening the massive hatch is performed with ease, AUTOart completes the task with two highly defined hinges and two struts supports.  Once inside you are greeted with a plethora of detail, where does one begin?  The upper surrounding of the motor area is completed with tampo style carbon fibre. 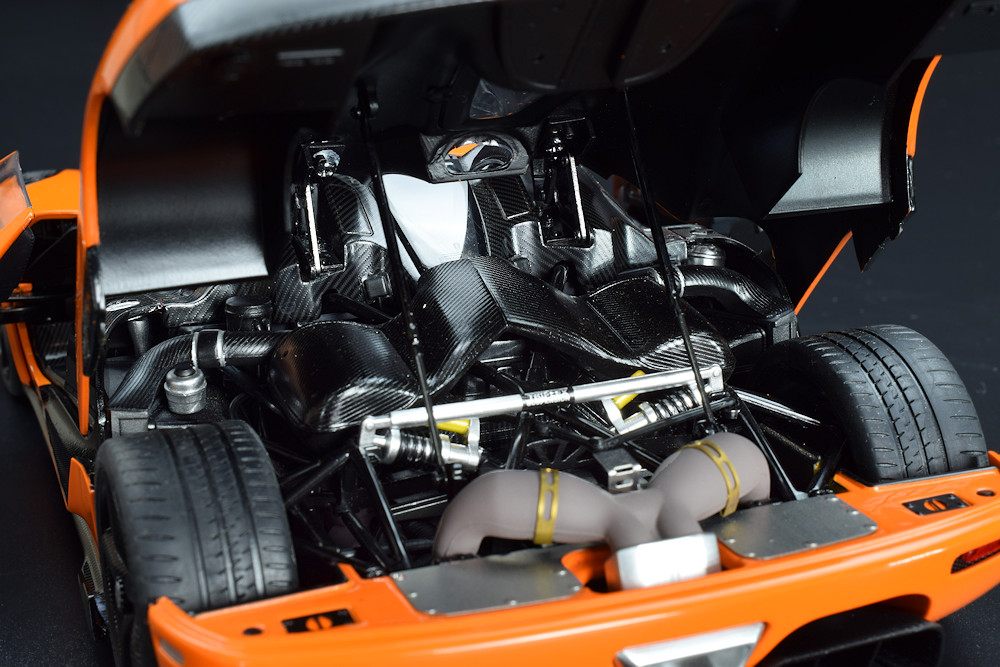 Now looking at the motor and related the intakes and upper section of the intake are completed with a moulded carbon fibre.  What grinds our gears, in the previous release (Agera) had this intricate part accomplished with tampo style carbon fibre, which was more entuned with the original.

Beautifully detailed shocks and strut bar sit just in front.  Admirable badge work on the strut bar!    What is missing though is the secondary strut bar that supports the two hatch struts.  Moving further down the textured ceramic exhaust with heat plates are attractive pieces and definitely adds creditability.  Though missing are two pieces of the exhaust system that flank each side of the tubing are missing.  This was the same on the Agera too. 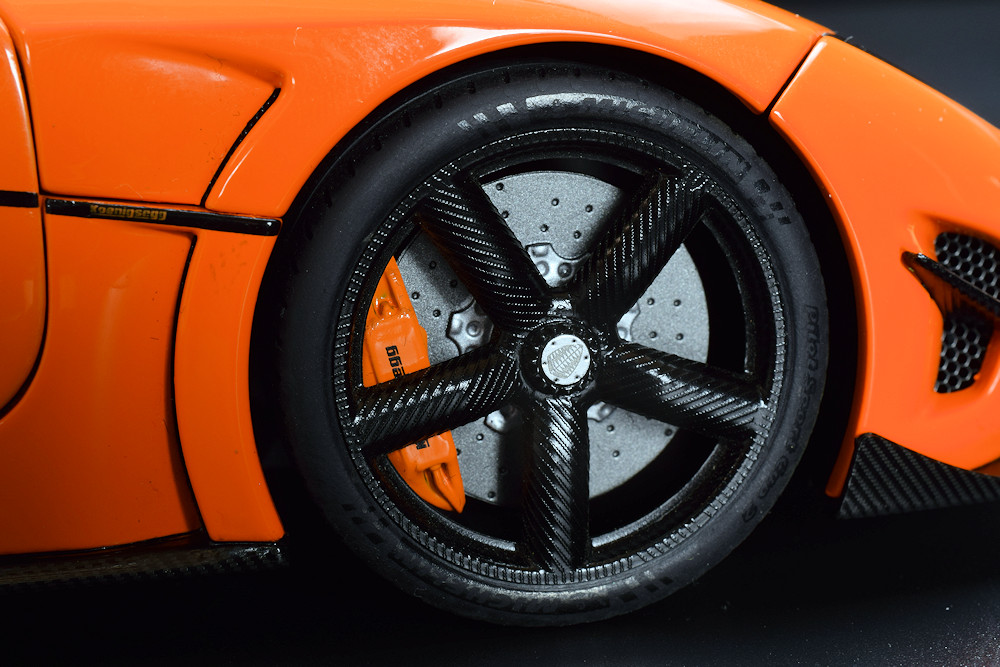 Rollers on the Agera RS mirror those found on the One:1 (the Agera RS does share parts and tech here).  The overall execution of the wheels is more than acceptable, though some will claim the sheen is off, we would agree.  Other than this minor miss would be the lack of air valve.  The supporting cast of braking components includes exterior paint-matched brake calipers that also include Koenigsegg badging front and rear.  Rotors mimic ceramic material; we love the consideration of detail in the centre part of the discs.  Lastly, tire branding is part of the package too.

As mentioned, the Agera RS does come equipped with a removable roof – fitment on our example was excellent.  Doors open and mirror operation to the original car, this feature still plants a smile of awe on our face.  So cool!  Note, mirrors do require you to install them, installation is very simple.  AUTOart is also kind enough to include two sets. 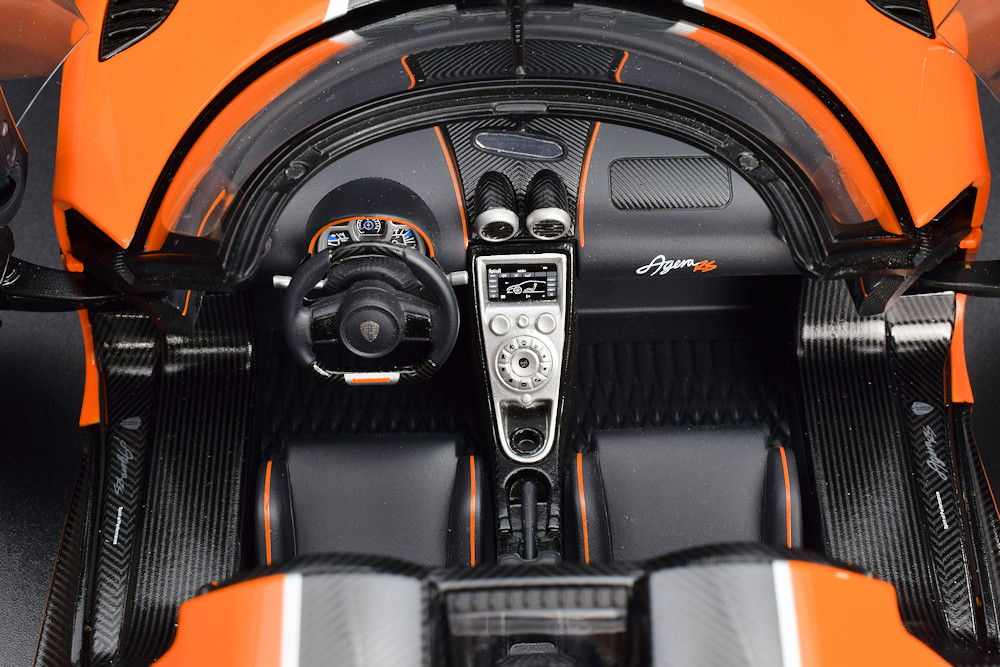 Inside the cockpit is surrounded by carbon fibre, AUTOart completes this with tampo style.  Appropriate badging is also included on the lower doors section, three in total.  Inside there is a mix of moulded and decals – moulded carbon fibre is focused on the doors, upper section of the dash and rear section of the back area of the centre console, whereas decals are found in the centre console and steering wheel.  The overall look isn’t bad, but at this price, a level of consistency would be preferred. 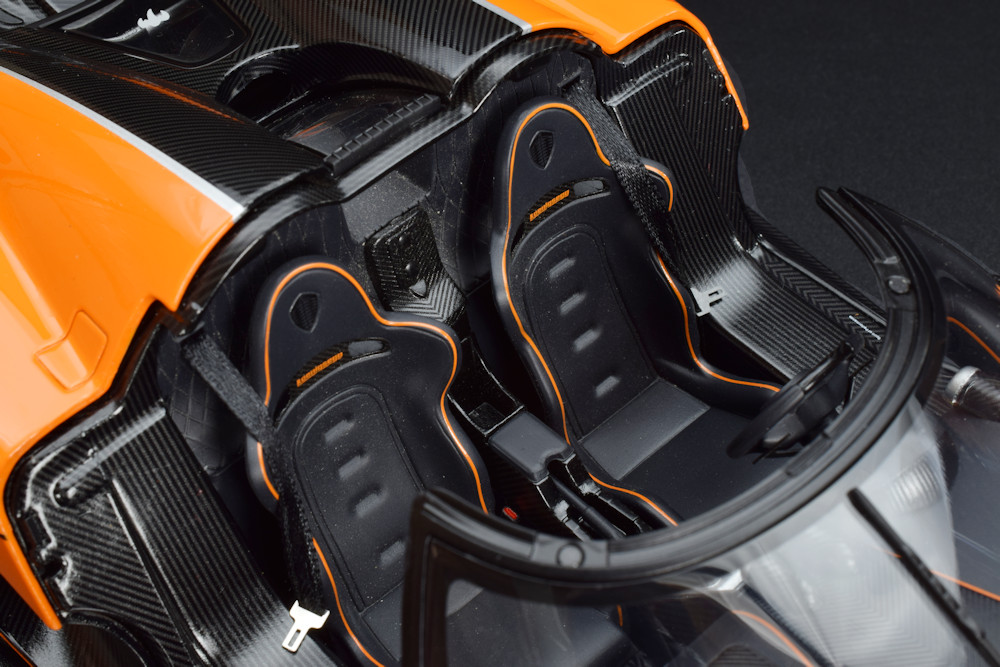 We still find the interiors on the LCD Models more refined, though AUTOart did action the seatbelts here in fabric with metal buckets.  Also, the dash elements seem to mirror the original more convincingly than their Pagani did.

Pound for pound the AUTOart Koenigsegg Agera RS is the best value for the money today…  Yes, there might be a sealed offering that presents the carbon fibre working in a better light, but, these are sealed and don’t offer the transformer experience here.  And there are some that say the Fronti-Art examples are better, maybe so, but these come at a premium, over $1000 CND.  AUTOart will set you back north of $400 after taxes. 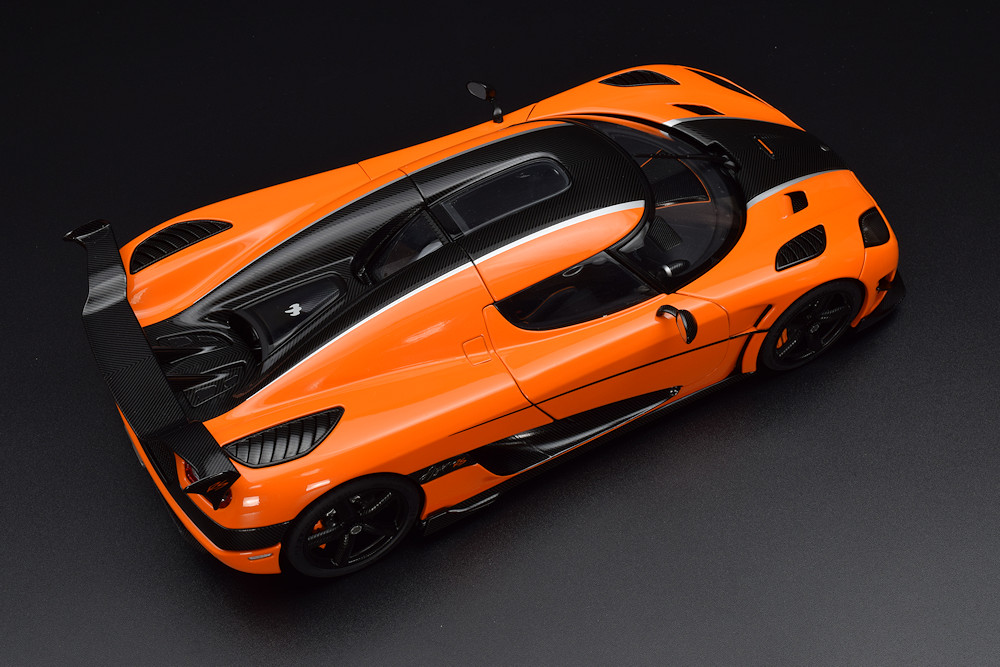 The above is no admission of victory.  There are some areas as we mentioned above that once were a staple in the early assortment from AUTOart that now with the luck of dice may be here or overlooked for various reasons.  The AUTOart Koenigsegg Agera RS is a delightful example and checks a lot of must-haves.  It is not perfect but what model today is?  Enjoy the pics!