Bentley … luxury barges where everything is bespoke, exclusive, artfully hand-crafted from the most exquisite materials, diamond-quilted, probably by in-house coachbuilder Mulliner … you get the idea. The Bacalar – named after a paradisiacally picturesque lagoon in Yucatan, Mexico – is no exception: A “genuine ‘roofless’ Barchetta, Bacalar is a luxurious, two-seat, open-air performance car” limited to only 12 units, every single one of them will be made to the exact individual specifications of their prospective owners, from exterior colour to interior materials. Prosaically, you may think of the Bacalar as little else than a 2-seater Continental Roadster. But Bentley is quick to point out that it does not share a single body panel with the Continental GT/GTCs. The 6-litre W12 engine is tweaked to 659 horses to accelerate the roadster to 100 kph in some 3.5 seconds and on beyond 320, some say 335 kph.

Without access to any of the individualized customers´ cars, Top Speed replicate Bentley´s demonstrator Bacalar from the cancelled Geneva Motor Show 2020 and its colour and material choices (later baptized “The Randwick”) – all in resin and sealed, or as sealed as a topless car can be. Top Speed nicely captures the “dynamically sculpted design for the future” and the shape of the car. The Flame Yellow paint is applied smoothly and oscillates fascinatingly into the curry-greenish. The Dark Bronze accent line wrapped around the car and the black accents become a difficult detail for model makers, but that is where sealed resin manufacturers usually come into their own and often surpass opening models. There is no getting around the fact that panel gaps and shut lines are problematic on sealed models in bright colours, showing not enough of a gap, but Top Speed has engraved these lines deep enough to deem them tight instead of non-existent from an angle. The sealed bonnet shows the opening latches but leaves the engine hidden. 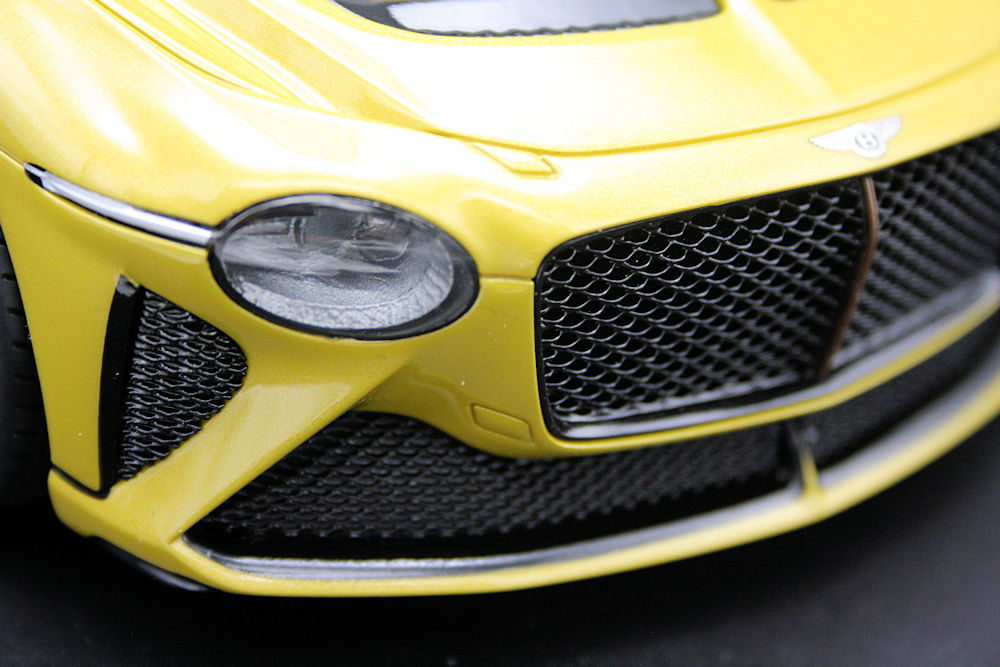 Unlike the smaller side vents´ and lower grilles, the giant radiator grille seems perforated or has enough depth to cover that up. It has the “unique front and rear horizontal lights add the distinctive, dynamic character that was first seen on the EXP 100 GT”. The headlights, inspired by the Bentley centennial design concept, have a diamond pattern (that could be sharper) carved into the reflectors behind the single lens on each side that is crossed horizontally by the daytime running LEDs. The rear lights, unlike any Bentley in production, again continue Bentley´s Beyond100 design cue of the EXP100 GT, but the internal octagonal honeycomb pattern of the rear lights is lost in translation into scale. While on the bonnet the photo-etched Dark Bronze Bentley-wings-emblem lies flat, in the rear it is adventurously floating in the wedged horizontal recess, visibly mounted by a metal tongue top and bottom, while from behind the badge on the original. 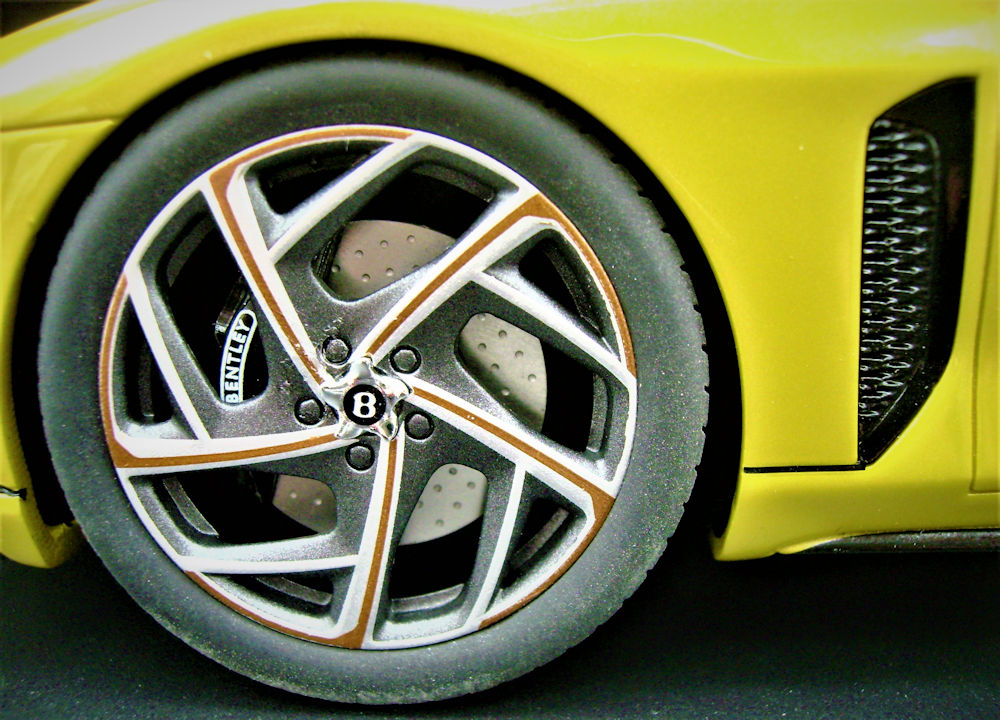 “Bacalar features bespoke, 22-inch tri-finish wheels with dramatic depth and contour”, thin lines of chrome, Dark Bronze and alloy, daunting for any model maker to replicate. Top Speed has done an excellent job here, while the tires are still without branding or valves. In addition to the wheel nuts, the wheel centres have a ninja-star-sharp faux knock-on/off-spinner reminiscent of Bentley´s early racing days. Kudos to Top Speed for having mirrored the rims for each side to match the direction of travel! The black brake calipers bear Bentley´s name, but the discs could be drilled deeper. 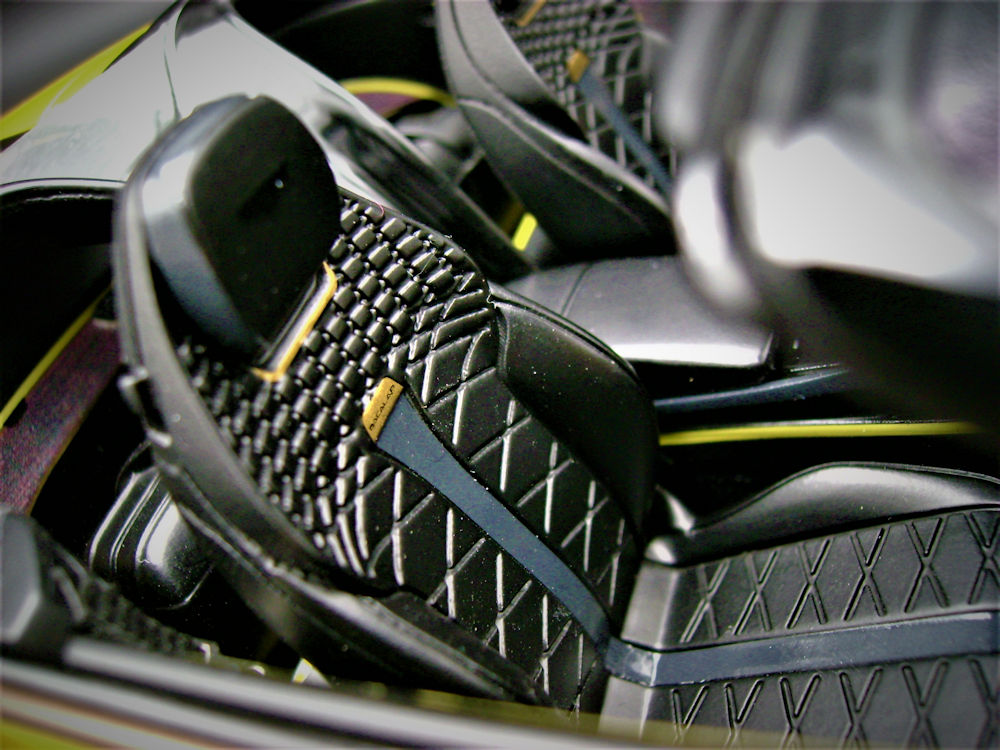 The interior is where resin model makers shine as well: Top Speed not only credibly replicate the seats´ luxury quilting and stitching we sorely missed on AUTOart´s DBS Superleggera, they have real cloth seat belts with photo-etched buckles, different colours resembling the leather and cloth, succeed in simulating the different appearances of the 5000-year-old open-pore Riverwood and the varnished veneer, finely separated by a Dark Bronze line that encircles the blue-faced “three, elegant analogue dials that display outside temperature, a compass and chronometer” in the “third side of the Bentley Rotating Display” we know from the current Continentals and the “unique clock face with [on the model without] individual one-of-12 badging” below in the glossy black centre console as well as the button clusters on the flattened-bottom steering wheel with its “Bacalar” script and the yellow centre steering marker at the top that underpins the car´s performance side. You can read every single icon on the buttons on the steering wheel and in the centre console. Dark Bronze accentuates the top of the gear lever as the interior´s centre, while the yellow piping wraps around the cabin inside as does the Dark Bronze accent stripe to separate the interior from the exterior, or as Bentley says “a ‘wraparound’ cockpit design that […] blends the interior and exterior together”. On top of the scoops behind the seats, a thin chrome line echoing the rims runs from side to side, the “valley” between the scoops bridged by a thin rear window.  Incredibly much effort has gone into these details on the model, while the moulded-in bags in the two “luggage ‘pods’ [that] envelope the seats“ are a little “meh” to me. 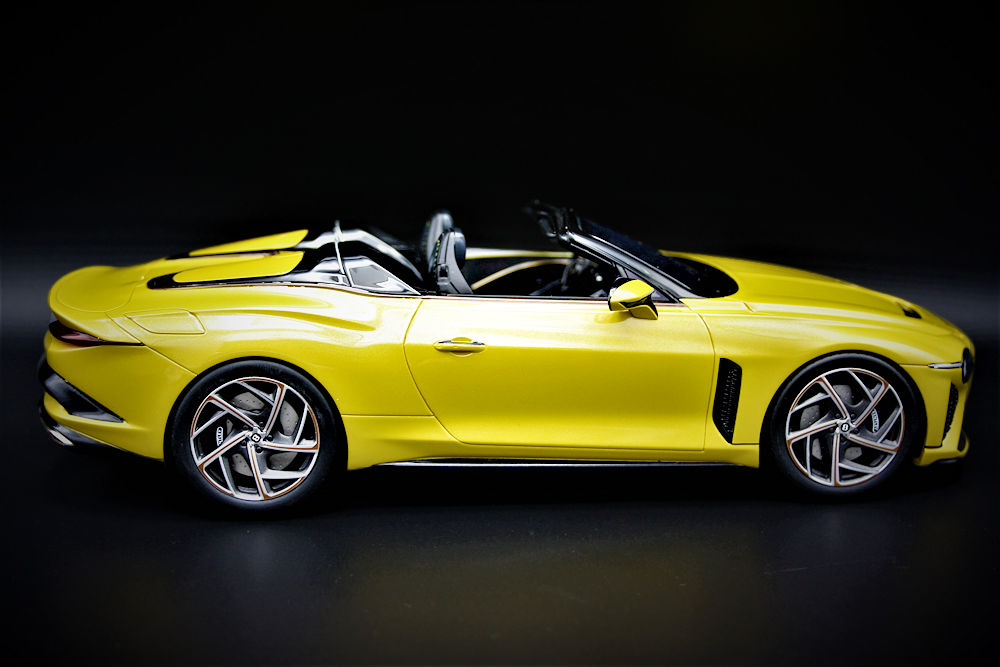 Perhaps almost 2 million $ (including taxes) may seem a little steep for the real car, 150€ for this model certainly is not. So small wonder it sells out as quickly as the 12 original cars did and sellers quickly start asking a premium: I have seen 180 € and over 300€ in Japan. Not only do we here at DiecastSociety.com seem to have a soft spot for concept cars (which this very much remains). Although strictly speaking this is more like Bentley´s last “Hurrah” to the petrol car. The next Mulliner coach-built Bentley, the Batur, scheduled to be revealed on the 21st of this month, will be all-electric. (And when eco-Prince Charles will ascend the throne, there will most likely be a new, all-electric Bentley State Limousine … God save the Queen!) But then, don´t we model collectors have always had more of the automotive past in our display cases and on our shelves than its present and future? To get a good model we usually have to wait until the real thing is almost or has – sometimes long – gone out of production. So most of our collections lay testament to the era of the internal combustion engine. And a Bentley-themed collection covers most of this era and therefore needs this as its capstone.