The Ferrari F12 Berlinetta was the car that Jeremy Clarkson went airborne in on Top Gear and that he found so scary that he actually suggested giving it less (!) power. Have the Maranello guys listened? If you take the tdf as their reply, no! In the market for a family car, “tdf” suggests to economically translate into something “turbo-diesel”-ish, but in fact it alludes to the turbo-devilishly fast Maranello-thoroughbreds (legally) put on steroids and optimized to dominate the Tour de France endurance races across France (long before cyclists were illegally doped into the horsepower-league). Chris Harris therefore pleasantly found it to be demanding more of its owner than the money to buy it, which is a lot, given that buyers needed to qualify for this exclusive F12 swan song limited to 799 pieces by already having at least five other Ferraris in their possession to start queuing for one. 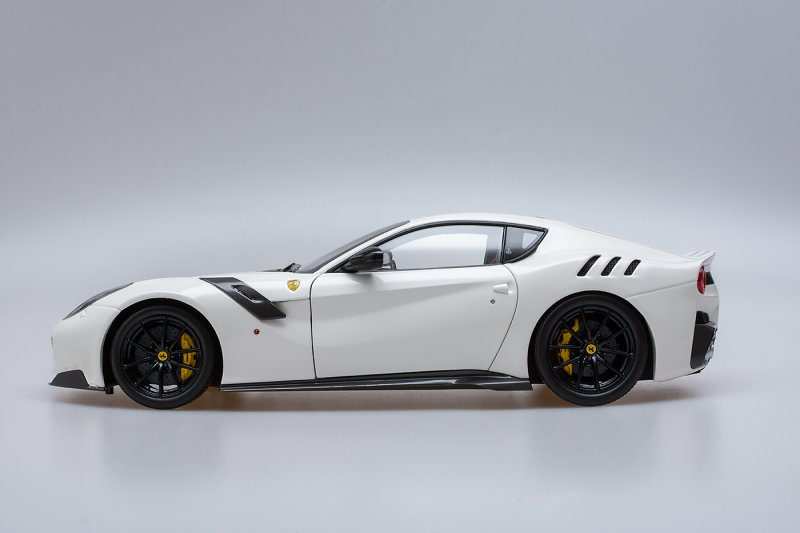 Luckily, no such requirement for model collectors because the ten 1:18 and one 1:8 do not make me a die-hard diecast-Ferraristo. Thus for me making a colour-choice usually is a no-brainer for a Ferrari. There is no other brand so much synonymous with a colour – or would you spend much thought on what colour to have on a fire-truck?  See, that’s why all my other Ferraris are red, and yet, although BBR’s first diecast in years will be offered in red, too, I have decided against it this time. Next to Hot Wheel Elite’s F12 Berlinetta red makes the tdf look too tamely ordinary for such an extraordinarily ferocious stallion IMO. If you agree, you will still have to choose between a sinister black with white racing stripes and black rims, the yellow press car with the same silver rims as on the red or this white one with its Italian tricolore stripes.

Most deviations from the Berlinetta in body design are required to enhance the vehicle’s aerodynamics and help the jockey at the reins to handle the edgy stallion. So let our eyes caress its shape following the airflow around its muscular body, cooling both its thoroughbred red-hot heart and its carbon-ceramic brakes while pressing its ferociously pawing wide-tread hoofs into the tarmac and into submission to its master. 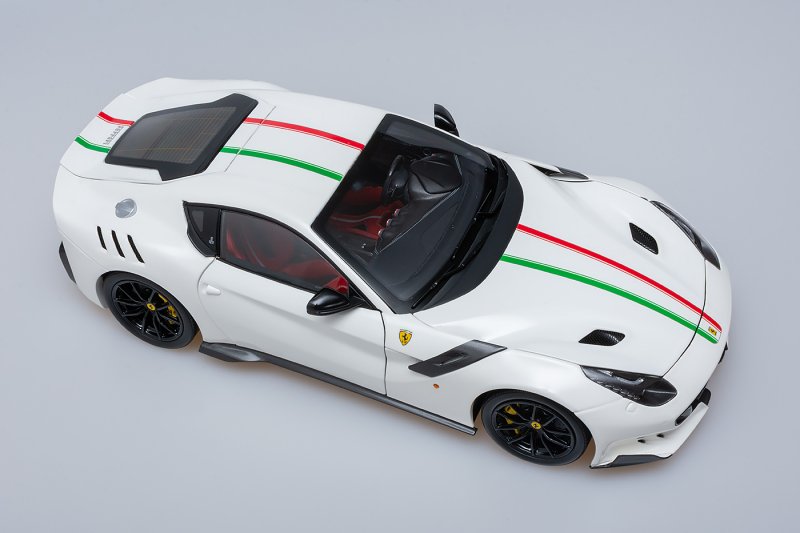 BBR’s F12 tdf can credibly take in a deep breath of air through the finely meshed grille at the front end that is proudly bearing the detailed prancing horse to cool the engine and minimize interference with the underbody, to then partially release it along the underbody and partially vent it through the equally finely meshed nostrils in the bonnet. The new front spoiler has the thin Formula 1 wing  to direct any air not taken into the engine bay to the underbody, real tiny louvered air intakes towards the sides to increase floor load and delicate fin-shaped carbon dive planes to manage wheel wake on the sides, all of which seems so fragile that I dare not touch them. Unlike the BBR diecast F430 there are no instructions not to touch some parts, but better safe than sorry.

Most obvious is the carbon-clad “aerobridge” on the sides of the bonnet that channels any air not passing straight across the bonnet, roof and rear end´s raised spoiler lip, seemingly leaving the Italian tricolore racing stripes as if Frecce Tricolori had thundered through, from the creased bonnet’s sides into the crease along the flanks. These being diecast parts, it is remarkable how sharp the creases have been cast; the light and shadow on the white paint nicely underlines the shapes. The carbon-effect plastic side skirt helping to manage the airflow is equally delicate. On top of the rear wheel arches you find classically racy three louvres to extract air from the underbody and increase downforce, and even here the black mesh is not simply recessed to disguise a shortcut, there are real holes in the diecast wheel arches. Brilliant! Not so brilliant is the slight blot of extra paint at one of the louvres over the right wheel arch. 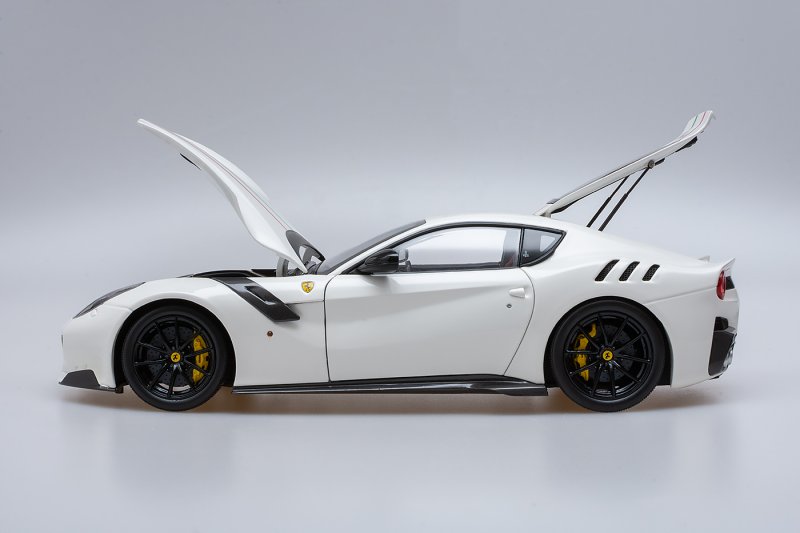 Any air not diverted elsewhere by then leaves the underside through the rear diffuser that, however, is not really active on the model, but nicely “carbonized”, just like the box-like housings for the superb double twin-exhausts or the panel between the tail lights. Like all the other exterior “carbon” elements, the pattern is printed on in a shiny finish that would dispel some of our worries about the upcoming Lamborghini Centenario if that only was to be made by BBR, too. In terms of carbon BBR literally shines where AUTOart recently does not. 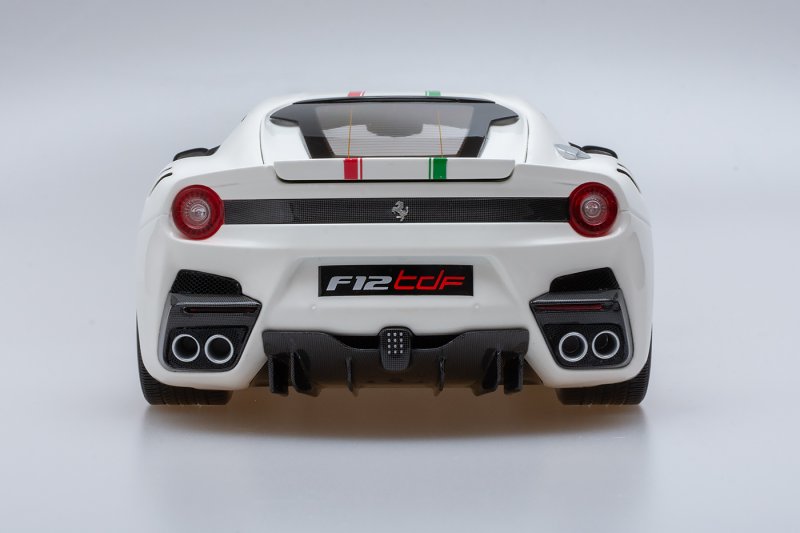 The rear lights’ interior is three-dimensional and can be admired through the sharply divided clear and red sections of the tail lights, not least because the red is a light, perhaps a little too light strawberry red. But that might be the white paint lighting it up further. The headlight assembly in its mixture of carbon chassis, lenses, LED daylight running stripes and glass housing are a masterpiece to which the Hot Wheels Elite F12 cannot hold a candle (excuse the pun). You almost expect the lights to flicker into life. Further details, of course, include the petrol filler cap in matte silver and all the Ferrari badges and horses on the model. The horses and Ferrari scripts are delicately photo-etched and I would be careful and avoid dusting off the model with a cloth as it might catch and damage these details. The badges on the fenders and the bonnet are convexly bulging and add great realism to the model. The amber fender dots are there, not much to be said about them, but that they exist. 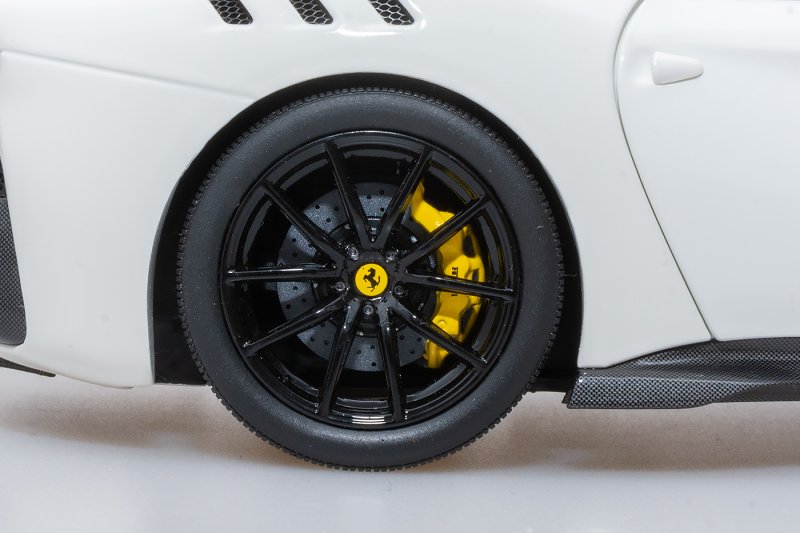 More interest can be taken in the wheels with vented ceramic brake-discs replicated on all four and a particularly noteworthy set of excellently detailed yellow calipers behind shiny black rims with unbranded fine-treaded tires. Whereas the rear wheels fill the arches well, the front tires seem just a little too small, but pictures of the real car in white leave me with a similar impression. As they are on the real tdf, the front wheels are wider than on the Berlinetta. To counter a consequential tendency to oversteer, on the real car, the rear wheels steer, so that wobbles of the rear wheels that models occasionally have could be excused as being on purpose, but the wheels on mine are absolutely firm. Unfortunately, the front right wheel on my model does not quite touch the ground.

Half of the fun in collecting is, of course, accessing the dream car, without which the collector experiences a sense of exclusion as if we were trespassers pressing our noses against windows of other people’s cars. The rear hatch has a photo-etched Ferrari script and opens on struts to reveal a detailed boot whose partial parcel shelf can be flipped up, so that you see an uncarpeted floor, a production plate at the well towards the cabin, oval lights on both sides and what looks like silvery locks to remove the side panels over the wheels. Between the actual boot and the front seat, where you would expect rear seats in a four-seater you can see a luggage shelf with rails and straps to keep luggage in place. Another attraction visible through the open rear is the carbon of the seat buckets and how the red “leather” upholstery seems to be a separate part, not only painted on. 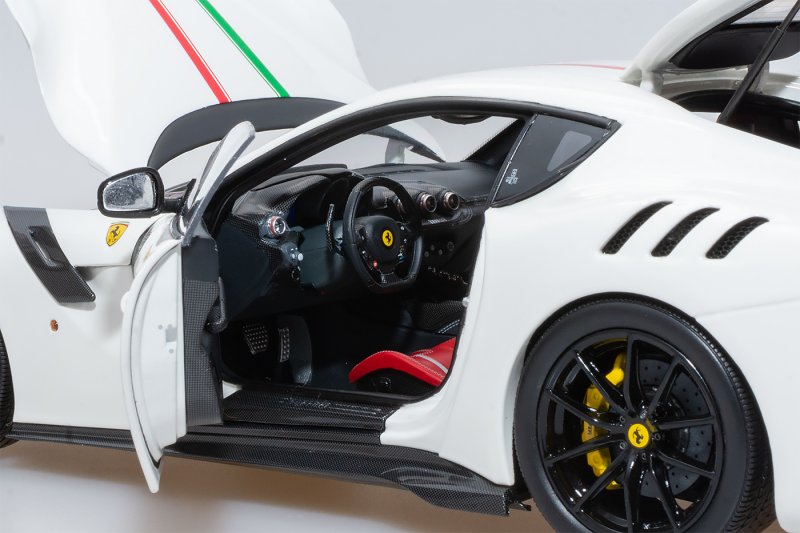 On the driver’s door only you will find a lock underneath the handle, photo-etched so finely that you would want to insert the old-fashioned key blade that this F12 is one of the last Ferraris to have. Opening the door is truly rewarding, not only for what is inside the cabin. The tread-plate on the threshold is a brilliant replication of a carbon panel with metal rails along an equally shiny “Ferrari” script, definitely too magnificent to tread on. The door panels imitate carbon-fibre as neatly as on the exterior, with the handles´ centres excluded to mimic leather grips. The door bins have a fine mesh to pose as a net. The footwell area does not have carpeting but the replica of aluminum chequer plates with four black dots was screwed onto the floor. The air vents’ tips shine in a silvery metal with partially red bezels and ending in mat black mountings. 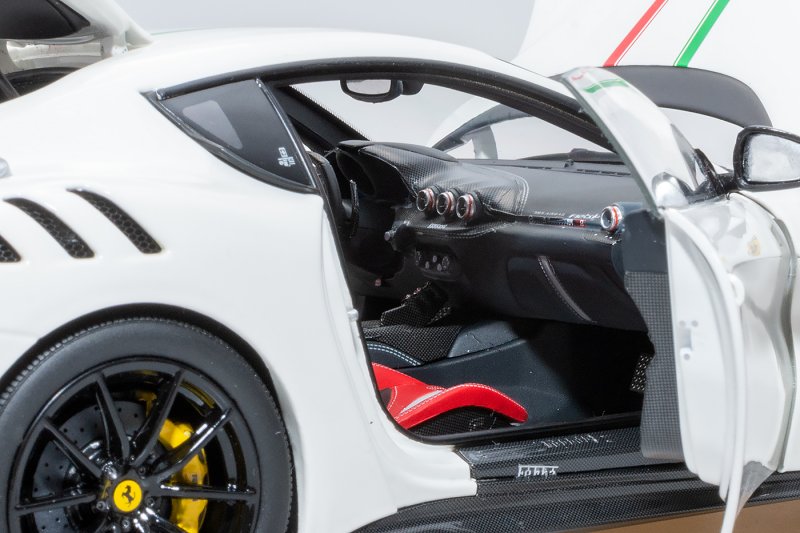 The passenger is informed in what car he is, reassured that he has an Airbag in front of him and in the door, just in case the info from the speedo/rev-display on the passenger-side worries him or her, which it well may, because they are only strapped to the bucket seats by a three-point red fabric seat belt with a photo-etched buckle. The red and black upholstery of the seat with the greyish-white centre line and horse on the headrest lends a lot of lustre to the interior. On the seats and elsewhere where leather is replicated you find painted on contrast stitching as a nice detail, even on the back of the carbon/leather steering wheel you find cross stitching. On the wheel´s front, you find all the buttons and the red “manettino”. The giant gear flaps are carbon again and in the centre console, you find the funny arrangement of red buttons. As far as I can see, BBR has not taken ANY shortcuts but have painstakingly and accurately replicated every single difference in the material the inside of this Ferrari has to offer. Wow! That’s what makes a  1:18 model truly great and worth the 360-access. I apologize for failing to see how this interior could have been made better. 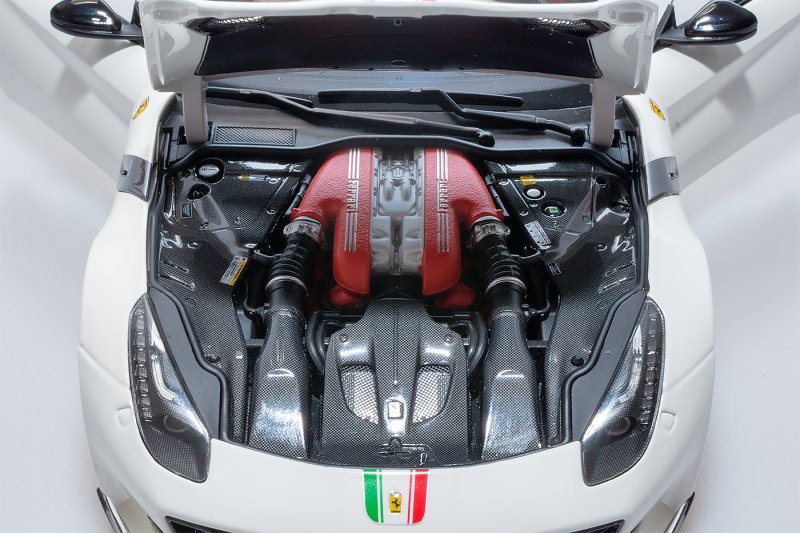 Under the bonnet, we find the naturally aspirated V12, perhaps the last in a Ferrari, and cranked up to produce 769 horsepower, which is why you would want to be careful with the spurs, set behind the front axle to make this a mid-engined car and covered in yet more carbon. The engine itself is a joy with the carbon, all the details, including fluid filler caps, stickers, etc., what isn’t, though, are the giant doglegs on which the bonnet opens. It is admittedly difficult to replicate the tiny struts that support the real thing, and yes, the hinges on the real car do resemble doglegs, too, but at the size of these they do stick out like a sore thumb and look out of place with the rest of the model.

Do I recommend the model? Oh, yes, despite its little flaws it has absolutely earned its stripes! Along with Almost Real’s offerings, it is a fine example of what can be done in diecast, even by a manufacturer with not so much experience in diecast models and I shall like to nominate it as a likely contender for our Model of the Year 2018. 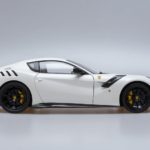 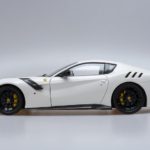 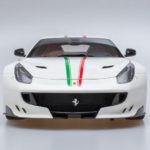 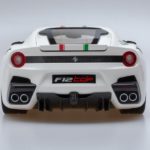 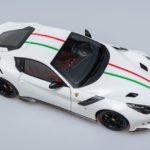 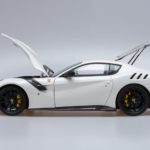 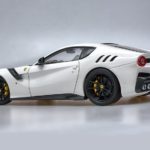 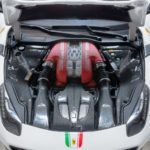 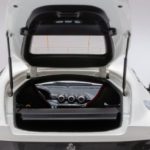 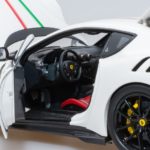 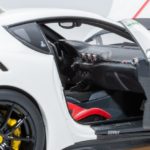 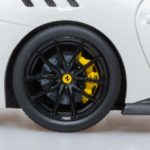 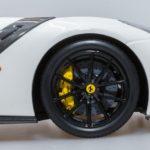