After I visited the 2019 IAA in Frankfurt where Automobili Lamborghini unveiled their Sián I knew MR would be building this most powerful Lamborghini ever in 1:18 scale, so I’ve put in my pre-order for one as soon as possible… 9 months down the line, still no MR model, but when Bburago announced they would also be releasing a 1:18 scale model I was happy and anxious; remember the Lamborghini Aventador from Bburago, it was more a 1:19 scale model, while their Urus was even worse, that became a 1:20 scale instead of 1:18.

But back to the Lamborghini Sián, where Sián translates into ‘lightning bolt’ I’ve been told, because this would be the first Lamborghini production model with a hybrid powerplant, the traditional 6.5 Liter V12 engine taken from the Aventador was still there, but in the Sián they added a supercapacitor.  A first in the world of hybrid cars, this puts down a total power output of 819hp, the most ever in a Lamborghini production car and 0 to 100 Km/h is accomplished in only 2.8 seconds with a top speed of well over 350 km/h. 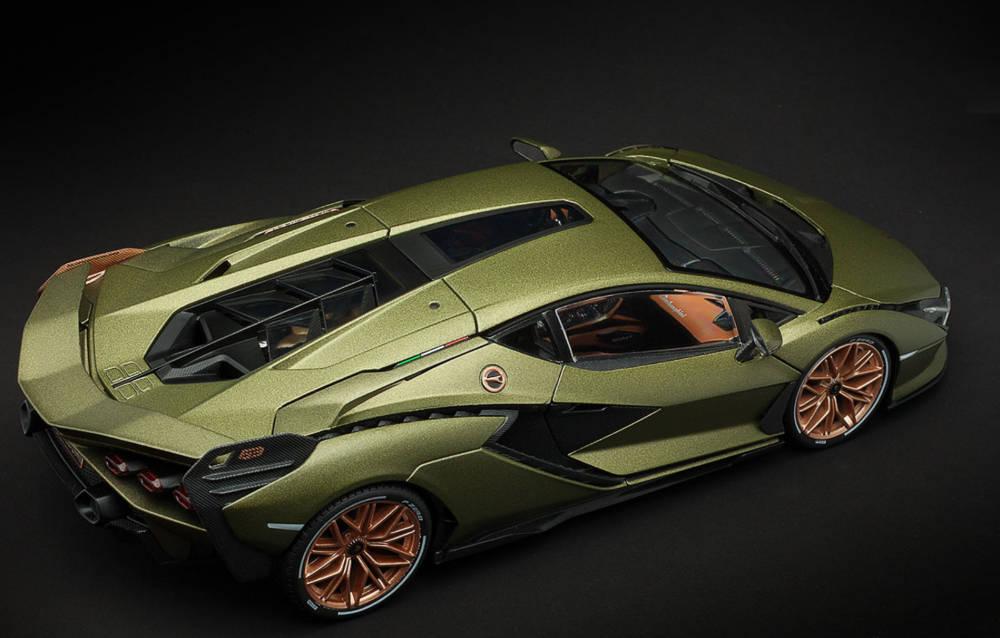 The Lamborghini Sián had to be built around the Aventador central hub, but in this case, the entire body has been radically redesigned.  At the front, we get a big overhang with lots of carbon fibre parts and the very special Y shaped driving lights seen on the Terzo Millennio concept, the actual headlights are housed in the vertical running carbon fibre insets between the front hood and the fenders.

Speaking about the front hood, note how the central part runs into an air intake in front of the windshield, a design element taken from the actual Lamborghini Countach prototype from the Seventies.  Another clue taken from that same car is the roof design. Remember the Periscopio on the early Countach models, an opening in the roof that allowed the interior rearview mirror to be used through.  That design element inspired a glass section in the centre of the roof on the Siän, running into the engine cover and this glass can be turned opaque by the touch of a button inside the Sián. 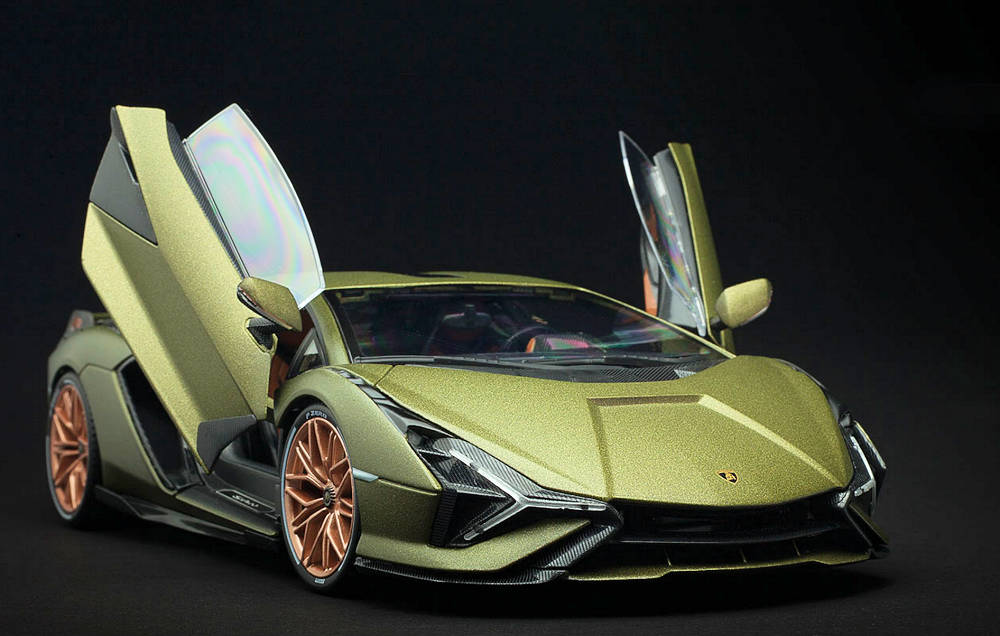 In total, only 63 units of the Lamborghini Sián will be built in Sant’Agata, and every single one will be created for its lucky owner by the Centro Stile together with the Ad Personam studio; no two Sián will be identical, every one of these 63 cars will be a unique, bespoke build.  The show car is finished in Verde Gea, a satin metallic green shade, combined with Oro Electrum.  A special multilayer paint that actually contains gold flakes and crystals.

Still when this model became available in late May of 2020 from Bburago in the original Verde Gea, a matt green metallic shade, I didn’t hesitate and ordered one from Germany.  It arrived a few days later, and I have to say I was very pleasantly surprised…  this model looked good, and for only €40 this seemed to be a real bargain but is it?

When I received the box from Germany I immediately took the 1:18 scale Lamborghini Sián out and measured her, the wheelbase on this model is 150mm, which converts into 2700mm in real life, which is the exact wheelbase of the Lamborghini Aventador, so this time Bburago got it right and made an exact 1:18 scale model. I also measured the width, including mirrors, which came at 126mm.  2268mm in real life, this should be about 2101mm, so the model is slightly too wide. 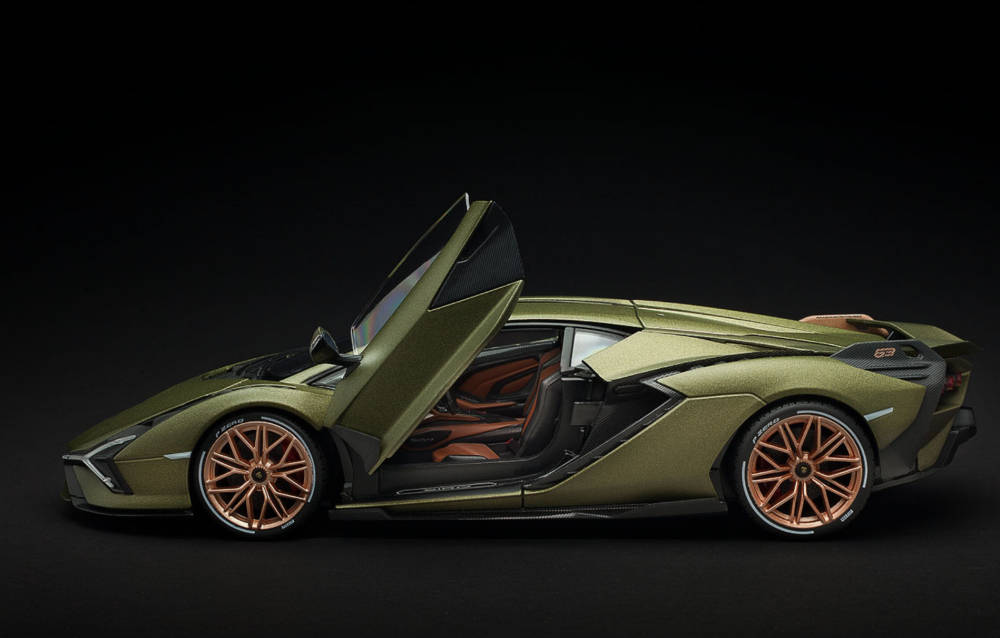 The length came in at 287mm, this converts to 5166mm while the real Sián is 4981 long, height measures up to 62mm which is 1116 when multiplied by 18 and this is almost exactly the height of the real car.  In the end, Bburago is rather close to their recreation of this model in 1:18 scale. As with most scale models, the wheels are larger than they should be, the front ones multiply up to 21.5 inches while the rear ones end up at 22.5 inches.  This should be 20 and 21 inches respectively but if sized down correctly they would look too small on the scale model.

Bburago opted for the show car livery, matt green metallic over a brown interior rolling on bronze wheels with red brake calipers and glossy carbon fibre exterior parts.  There is a rumour they will also release a white one later on, but for now, this is the shade we’ll have to deal with, and I don’t dislike it, it wouldn’t be my first choice when I would buy one of the 63 real cars, but it’s the press release and show car version, so I want it for my collection anyway. 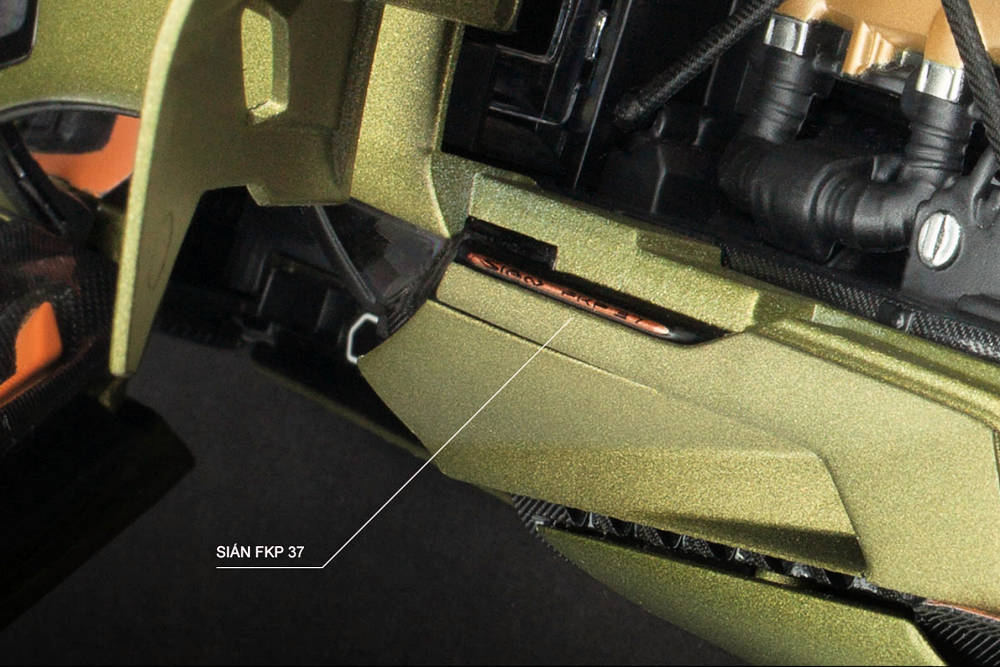 Taking a closer look at this Bburago you’ll start to notice just how far they went with the details on this 1:18 scale version.  There is a lot of carbon fibre on the real Sián, so you’ll find a lot of carbon fibre on this model too, the pattern is printed into the plastic, but still, it’s there (not like GT Spirit/Kyosho who just go for plain black), now I know not everybody likes ‘moulded in’ carbon fibre, but still, it’s there on this model, so that’s good enough for me right now.  I will add the AUTOart version of the Sián later on, but that will probably be almost 10 times as expensive as this Bburago anyway.

The real Lamborghini Sián as the ’63’ proudly fitted onto the vertical section of the rear fender, this Bburago model has this too but that’s just the start.  Look onto the inside of this fin, they are finished in gold just like on the real car, and much to my surprise this Bburago model has the ‘Realizzata a Sant’Agata Bolognese’ script on this fin too, now that’s attention to detail. 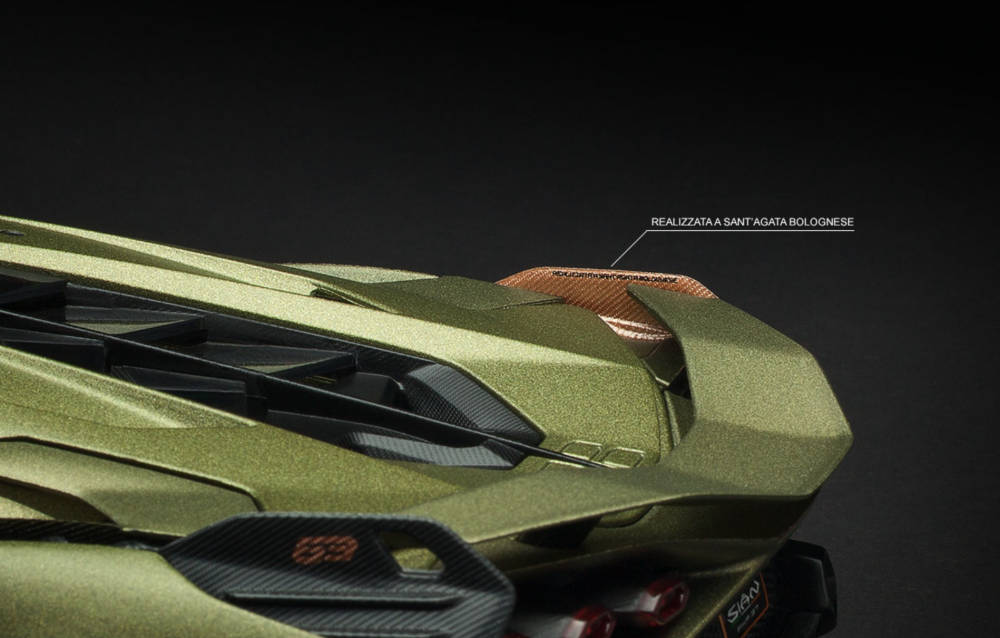 And it doesn’t even stop there either.  Bburago didn’t take the press photos as a base for this model but derived it from the real car.  Take a look at the two small, gold-finished fins next to the engine cover, on the passenger side you’ll find the Italian Tricolore, but unlike on the press photos, the real Sian had the ‘Sián FKP 37’ script on the passenger side in honour of Ferdinand Porsche.  This scale model from Bburago also has the SIÁN FKP 37 script on that side.  I’m very impressed with that.

On the tires we find the Pirelli P ZERO script and white livery while the disc brakes look decent, Bburago even added red calipers.  There is even a black ‘Lamborghini Carboceramici’ script on them. Very nice.  The wheels are nicely reproduced in 1:18 scale too, but it seems the shade they used is a bit too orange.  The real Sián had bronze wheels with an orange tint, but these Bburago look like they are just a little too on the orange side of the hue. 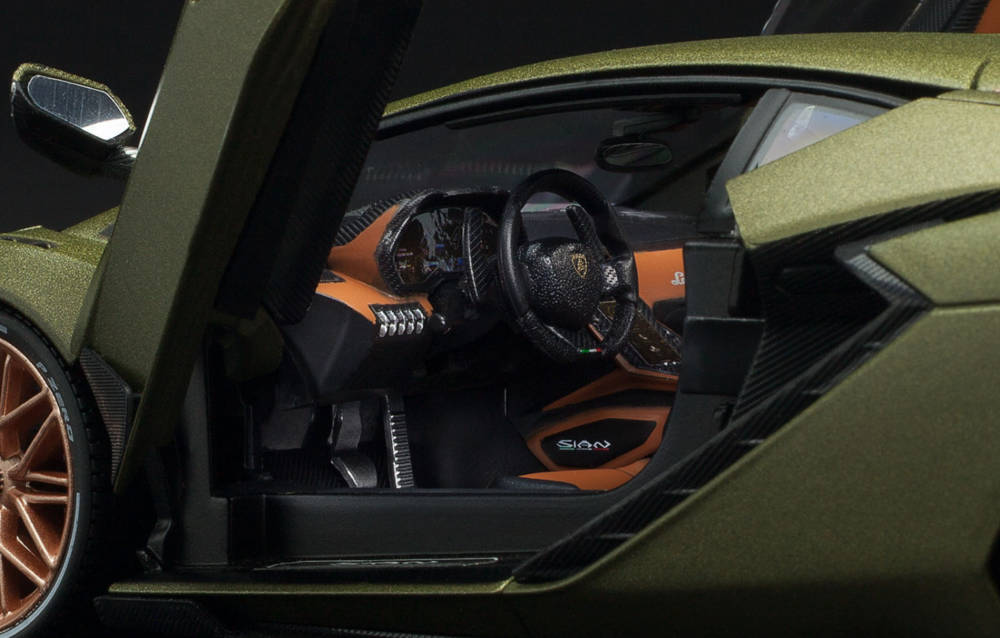 The interior is slightly above what we are used to from Bburago/Maisto models, it’s all there, the brown carbon fibre lightweight sport seats, lots of carbon fibre on the dashboard and central console, the red cover over the start button but it’s all a bit coarse, less detailed than for instance Norev or Kyosho.  At this price point it is a very, very good and nicely detailed interior, so no complaints here either.

The engine in the Lamborghini Sián is taken from the Aventador and had her power increased to 785hp, as on the Aventador SVJ, the Sián V12 comes with bronze/gold-finished manifolds (the Huracan Performante also had this feature), and Bburago replicated this on their 1:18 model.  It’s there, not highly detailed, but still decent.  However, one mistake Bburago made was the engine cover. 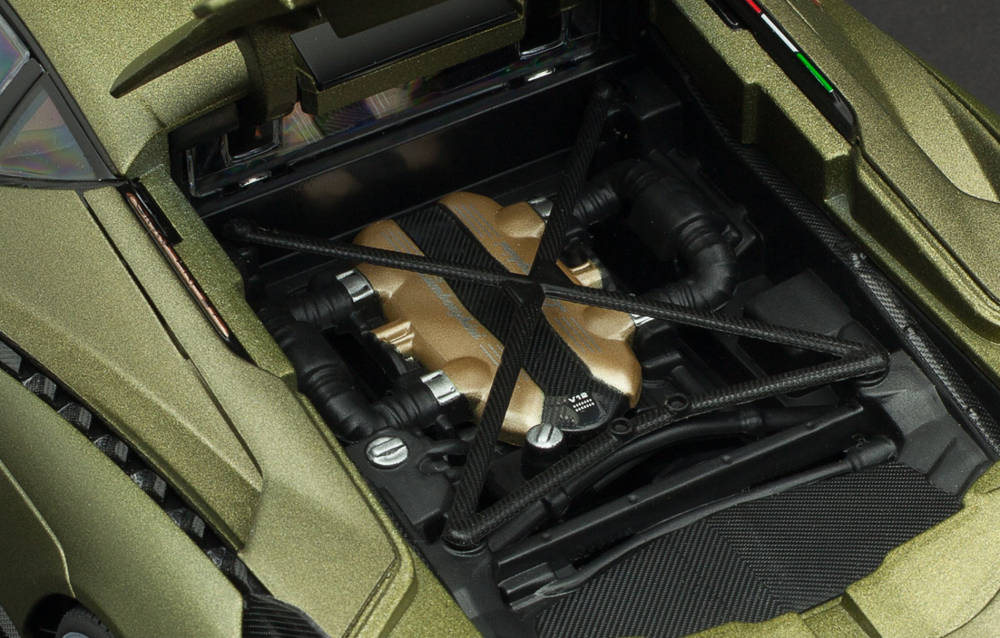 Remember the Lamborghini Centenario from Maisto? The engine cover was hinged at the roof while on the real Lamborghini Centenario this engine cover has to be lifted off.  Well, Bburago made the same mistake on this Sián, the cover is once again hinged at the roof while on the real car it’s a lift-off unit too.  Perhaps replicating this in 1:18 scale is too expensive, or Bburago/Maisto is afraid people would lose the cover while playing.  Remember these models are usually not intended for the same customer as an AUTOart.

Now comes the worst part of this Bburago made 1:18 scale Lamborghini Sián, the front hood. Now I have to admit I haven’t seen any images of the real car with the front hood open, but I’m more than certain she doesn’t have these two, massive dogleg hinges as seen on this scale model.  This is pulling this otherwise very nice model down for sure.  And it’s 2020, I’m sure it would cost much more to use smaller dogleg hinges, I understand Bburago can’t do detailed hinges as AUTOart would, but personally, I wouldn’t have been disappointed if they just kept the front cover sealed.  There is nothing to see anyway, so why bother. 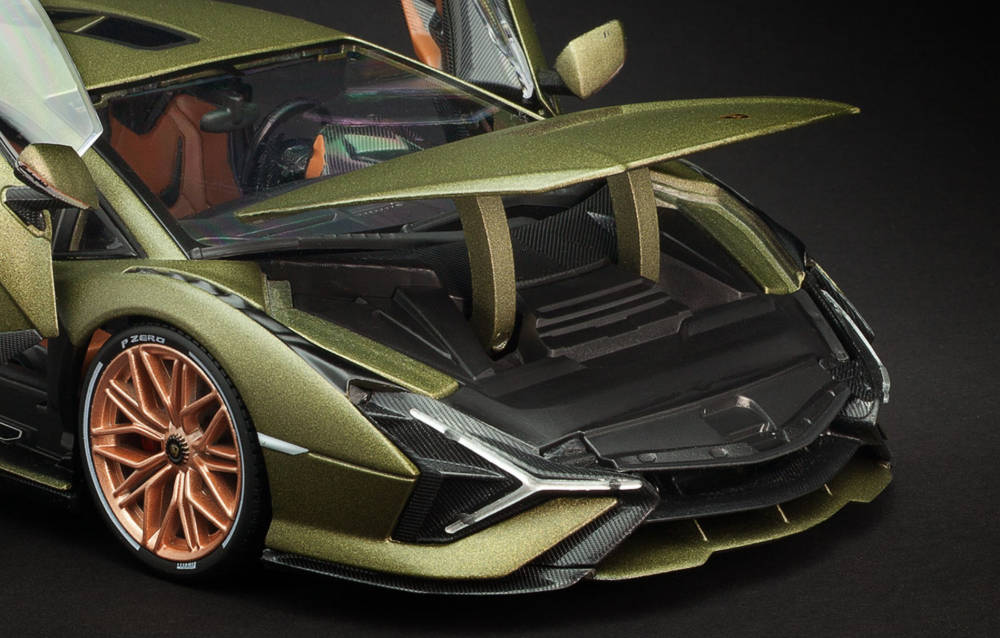 One final detail, as the Lamborghini Sián is a hybrid car, a V12 engine, and a supercapacitor combined, Lamborghini found it useful to put ‘Benzina’ on the fuel cap of their Sián. Bburago went as far as putting a tiny Lamborghini script on the exterior rearview mirrors, and the attention to detail all over this scale model is unseen from Bburago, but for some reason, they didn’t include ‘Benzina’ on the cap.  A wasted opportunity to add that final piece of detail on the exterior.

So is the 1:18 Lamborghini Sián from Bburago worth adding to your collection? Naturally, it is, this is without a doubt the best Bburago or Maisto I have in my collection, at €40 this is incredible value for money, and the scale is a real 1:18, what more could you ask for?  Just keep that front hood closed and you’re safe.

The doors even have full-size side windows, when did we see that on a 1:18 Bburago model (The €70 Centenario from Maisto had these too, the €35 counterparts did not), I love the little details like the Realizzato script or the FKP 37 reference on the driver’s side, sure the carbon fibre is a plastic pattern, but heck that’s fine on a model in this price range. 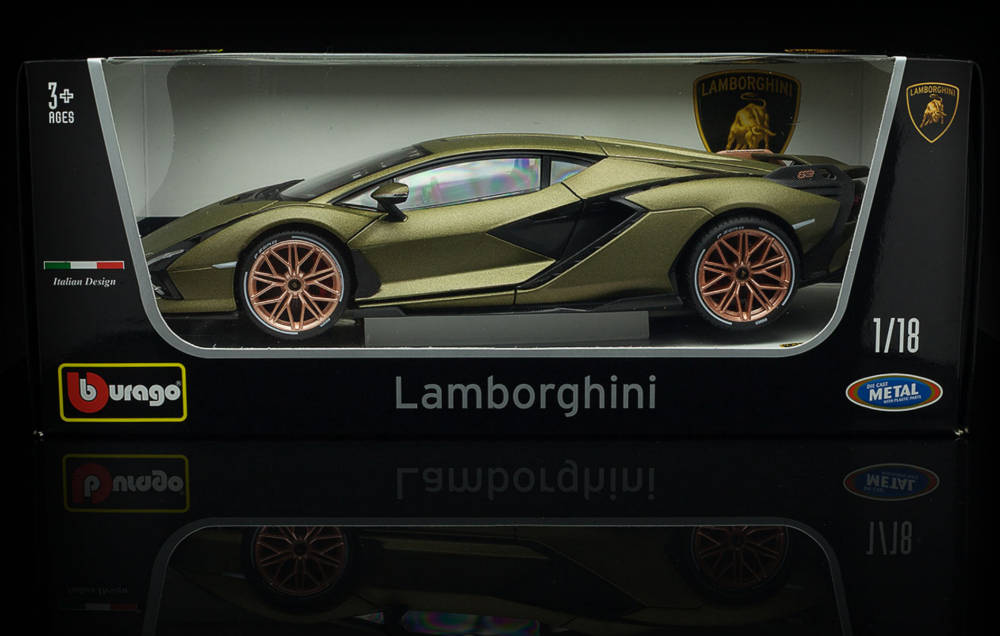 One small detail Bburago seemed to have missed from the real car they did paint the inside of the vertical carbon fibre fins on the rear in gold, but on the real car, the underside of the rear wing is also painted gold, or Oro Electrum as it is officially called.  Bburago didn’t do this, the rear wing is painted green on both sides.  On the flip side, it does move up and down, so that’s a very cool bonus.

For me, this is a must-have model for sure.  I will be adding the AUTOart model when it is released too, but this Bburago is too good not to buy, and when they do release another shade, I’ll be getting that one too.