One thing is certain in this hobby of scale model collecting you will eventually learn something new.  Just prior to Christmas holidays our team received a new package from DNA Collectibles.  One of the two examples was their latest 1:18 piece, the Rezvani Motors TANK.  Until this package arrived on our doorstep we were oblivious to the marque and their assortment of vehicles.  The manufacturer Rezvani Motors is relatively new.  The brain-child behind the TANK is Iranian-American entrepreneur Ferris Rezvani. 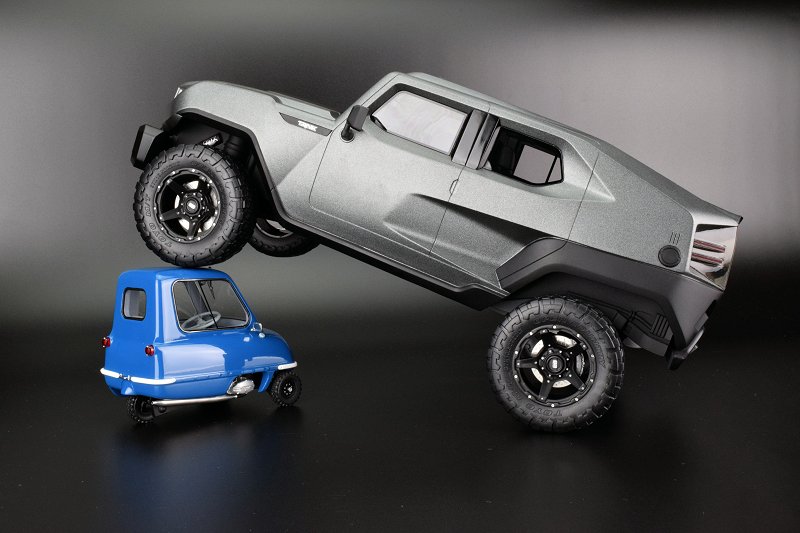 Rezvani initially jumped on to the car scene with a supercar, a handmade futuristic vehicle composed of ultra light material and built for extreme performance, she was called the Beast.

The TANK is a military-style SUV which is made to order with a host of goodies.  The list of options is long…  some dealer upgrades include the optional 6.4L V8 Dodge Hemi engine, thermal night vision, and bomb protection.  There are three variants of the SUV today, the TANK, TANK X, and TANK Military Edition.  Pricing starts at a mere $165,000US.  Do you want to learn more about Rezvani and the TANK?  Head over to their website for in-depth information and photos. 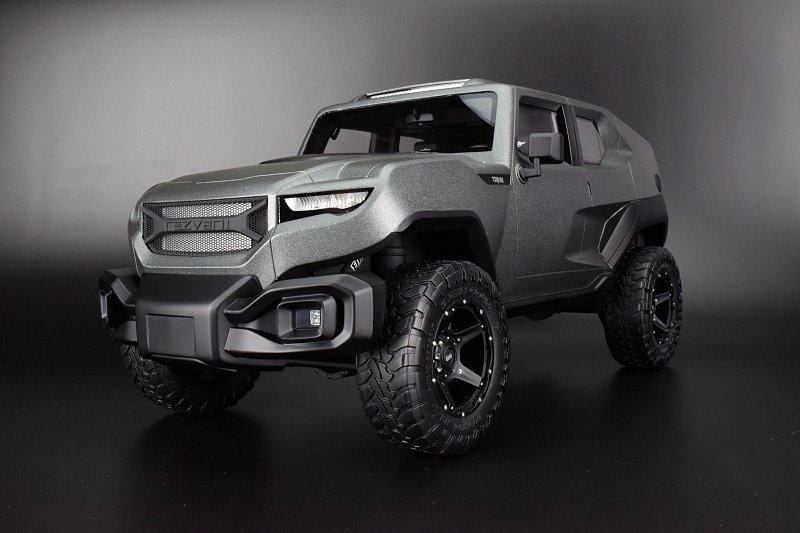 As mentioned the scale model version comes from DNA Collectibles.  To date, we reviewed a handful of their assortment in a variety of scales.  The team still understands niche; how to be different and invoke conversation with their very unique assortment decisions.  Out of the box, this thing is massive!  I’m sure you noticed the photos with their other scale model used as perspective, the 1:18 Peel P50 (it will be reviewed in detail soon enough!).  This example of the TANK is limited to 320 pieces with a suggested retail of $180US. 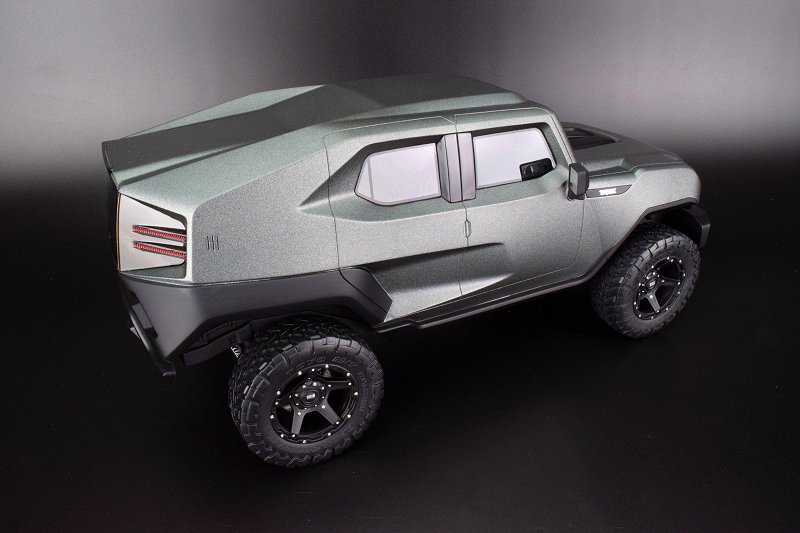 The exterior is completed in Matt Grey finish with Matt Black accents bits.  Our example is flawless from all angles.  The transition from Matt Grey to Black is on point and there are no signs of glue residue anywhere! 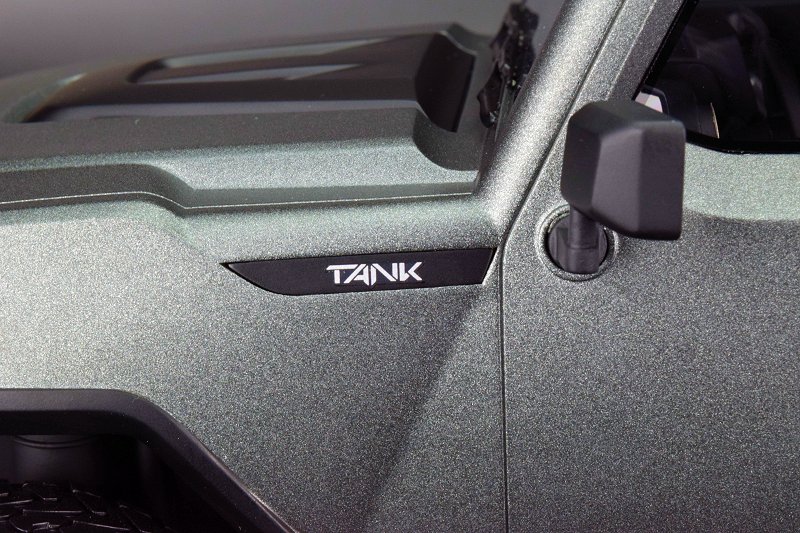 The team at DNA Collectibles does a great job at capturing the overall design and various nuances, especially those found in the mid to rear section.  We studied multiple images of the replica against the original, the overall representation is definitely in line with the 1:1. 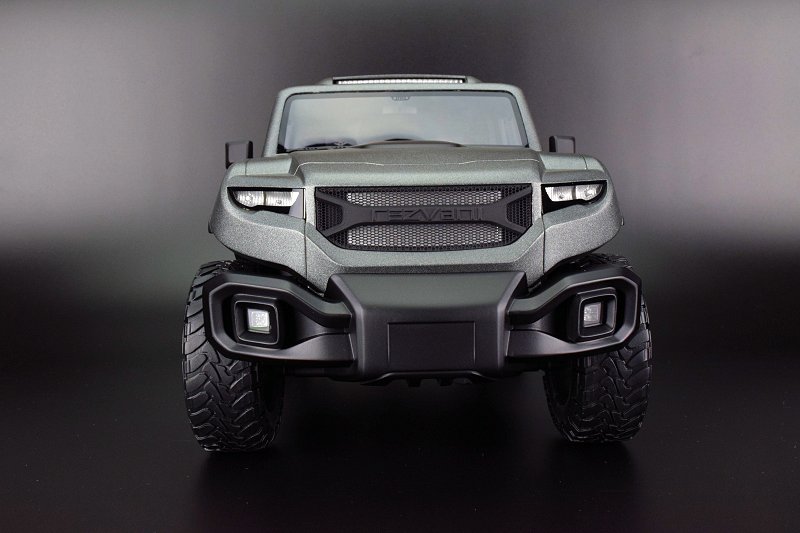 No matter what angle the TANK is aggressive by nature.  The front is dominated by a larger Black bumper.  It is nicely executed along with the integrated fog lamps – you can clearly define all four LEDs per light.  Centre grill is crafted with perforated metal and detail is evident in behind.  Headlights are on par with the fog lamps in term of quality material and finish. 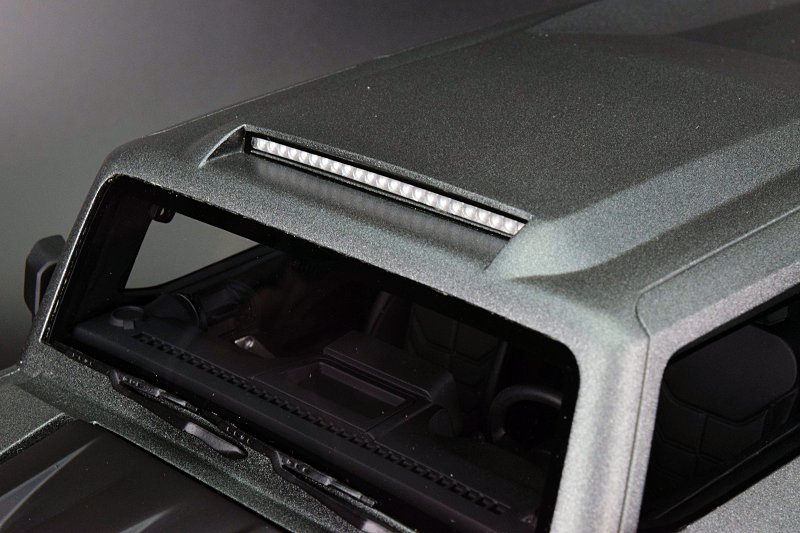 No access to the motor is available here; we have a sealed resin piece.  Just above the windshield there is integrated roll or LED lights.  Each is clearly defined, so well, in fact, one would think you can flick the switch and bring them to life. 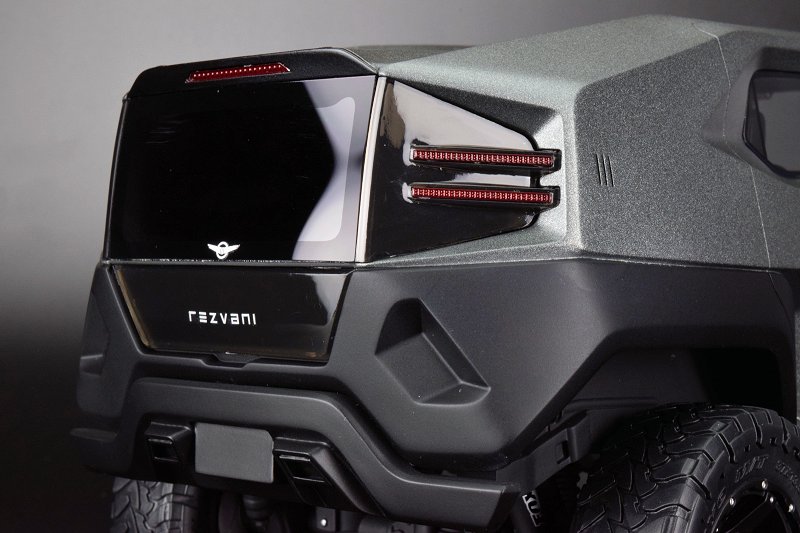 The rear of the TANK is unique is design.  Extremely flat in nature and dominated by two roles of LED lights or either side, with a third single role top and centre.  The execution here is solid.  Nice attention to detail by DNA Collectibles to add the hinges to the rear access doors.  Glass in tinted but one can still see the internals.  Inside the storage area is finished in plastic no flocking found here. 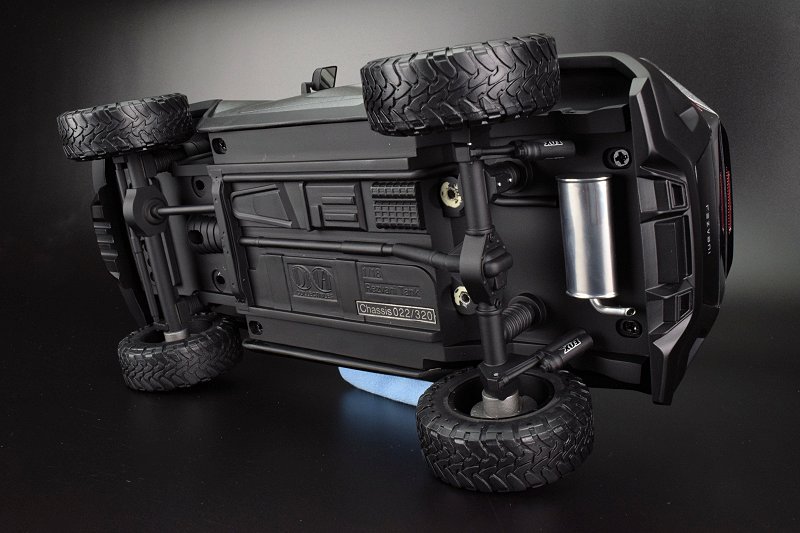 Usually found on resin/sealed models are a lack of undercarriage definition.  Well, we’re happy to report there is, in fact, some level of finish detail here.  The suspension is static, though does present good definition, though simple in design, the addition of drivetrain, muffler, and various suspension components.  The additional decals around the suspension components does help with the overall impression too.  We would recommend a little more paint to the various parts, this will help elevate realism factor. 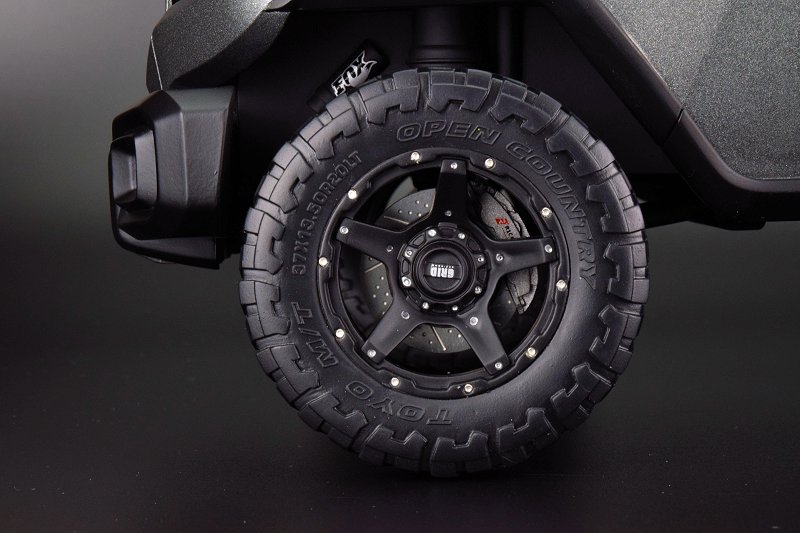 In our opinion, the wheels are the strongest element of the overall model design.  DNA Collectibles does an awesome job in re-creating the tires and wheels.  Tires are fully dressed with aggressive thread work and beautifully defined sidewall script work.  If someone is crafty by nature one can consider painting the script with White paint.

Wheels are even better.  Black paint is addressed with clearly defined rivets and bolts.  In behind, we have quality cross-drilled rotors and massive calipers.  We find the calipers somewhat flat, a little more thickness and depth would have yielded even better results. 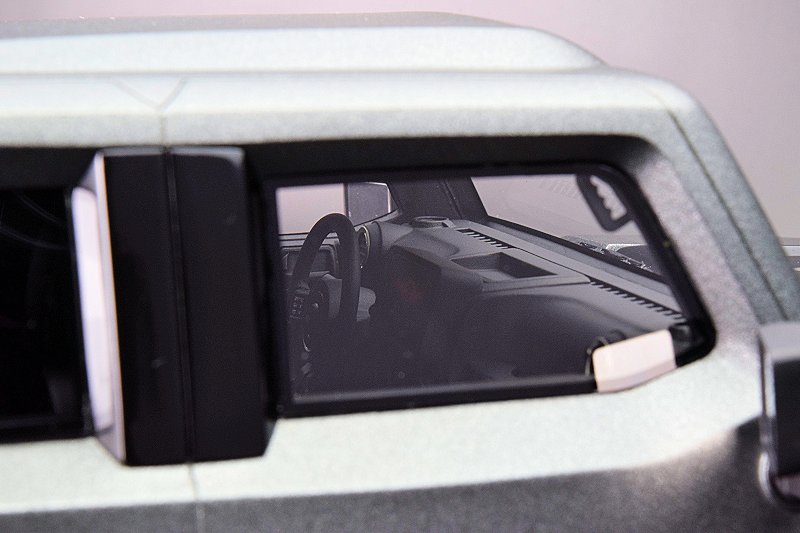 The interior comfortably seats four.  Each seat is clearly defined.  The team also provide fabric seat-belts for each passenger.  Dash is nicely executed in Black, some colour is provided with a decal for the tach, speedo and informational screen.  Rezvani script is added to the front holy shit bar as well.

Centre console does provide two levers, cup holders and armrest.  Even the roof section provides a level of detail with upper grab handles on each side for driver and passenger.  Overall we rate it B.  We’ve seen better results from the team. 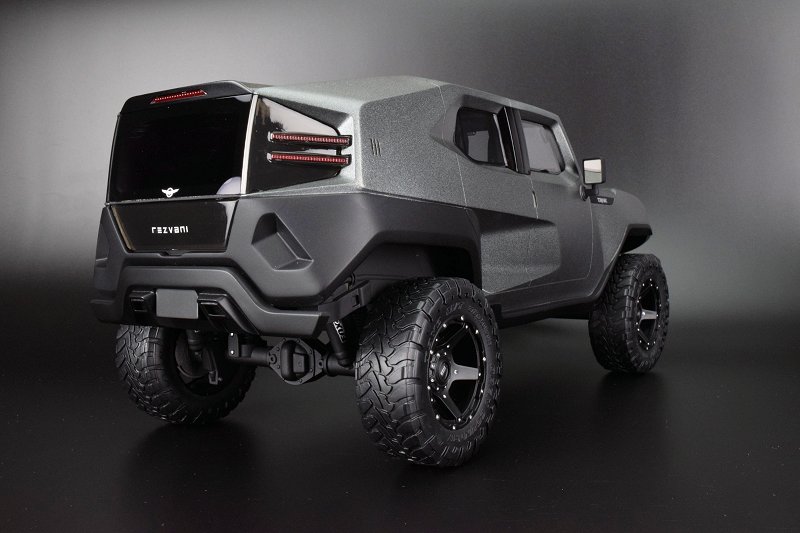 We’ve yet to see a model from DNA Collectibles we haven’t liked.  The Rezvani Motors TANK once again hits the mark with the awesome subject matter, paint, and exterior detailing.  We like the solid attempt at undercarriage detail too, but the interior though good doesn’t live up to past examples.  This one is a must-have for SUV or even concept fans.  Quantities of the TANK are limited, as mentioned only 320 examples of this monster will make it to scale.  And we have already taken one of the 320 lol.  You can buy direct via DNA Collectibles website.  Enjoy the pics!