The Bartoletti Race Transporter needs no introduction since CMC released its superb and super-expensive model a couple of years ago. So you might be wondering whether the Norev version for “merely” 300 Euros can be any good.

The Norev Race Transporter comes in two versions, the JCB Ferrari Team Transporter and the Alan Mann Ford/Cobra Racing Team transporter. Historically, they are one and the same vehicle, repainted for the respective teams, so small wonder there is hardly any difference. They significantly differ from what CMC depicted in that they had a second axle added to the rear, which is not wrong, but a historical fact, and, because both were English Teams, converted to right-hand drive. I went for the Ford version for two reasons. #1 I was fully aware that this cannot hold a candle to the CMC version. #2 I consider the Ford version more meaningful, objectively because Alan Mann Racing was there with its own GT40s at Ford´s legendary 1966 Le Mans victory, subjectively because I drive a Ford myself. 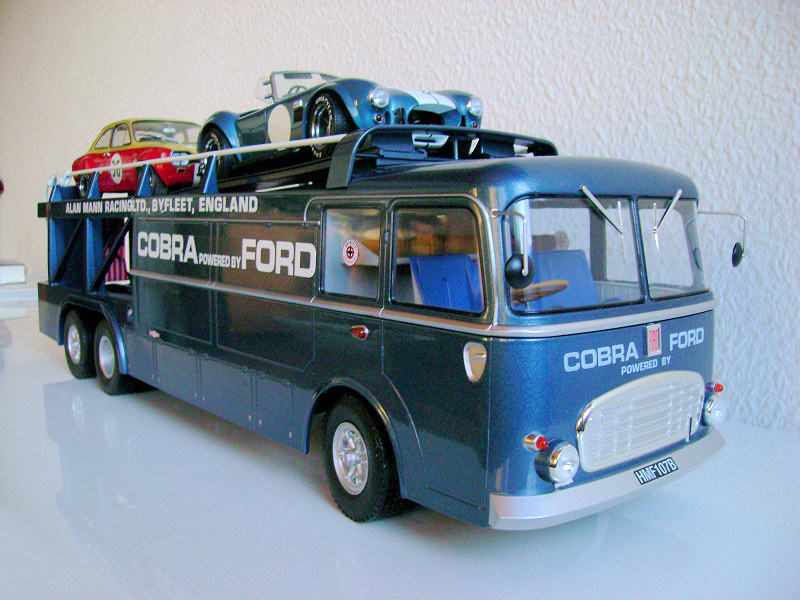 The model itself is a bit of a budget solution, funny as it sounds at 300 €. Yet it is something of a bargain as you´ll realize when it´s delivered: It´s huge and heavy and packing it generously into an even bigger box made me wonder whether I had ordered a new fridge. After peeling away all the protective packaging you will find a model whose weakest point aesthetically are the grille and the toyish wheels and rims, there is no denying that. It does look cheap, I am afraid. It´s the weakest point structurally are the mirrors. They´re only plastic and will break off easily beyond repair if you are not careful.  Fortunately, that has not happened to me (yet). But did happen right away, though, was that the white plastic top rail snapped off the driver´s cabin, but could be bent back into position. Bad? 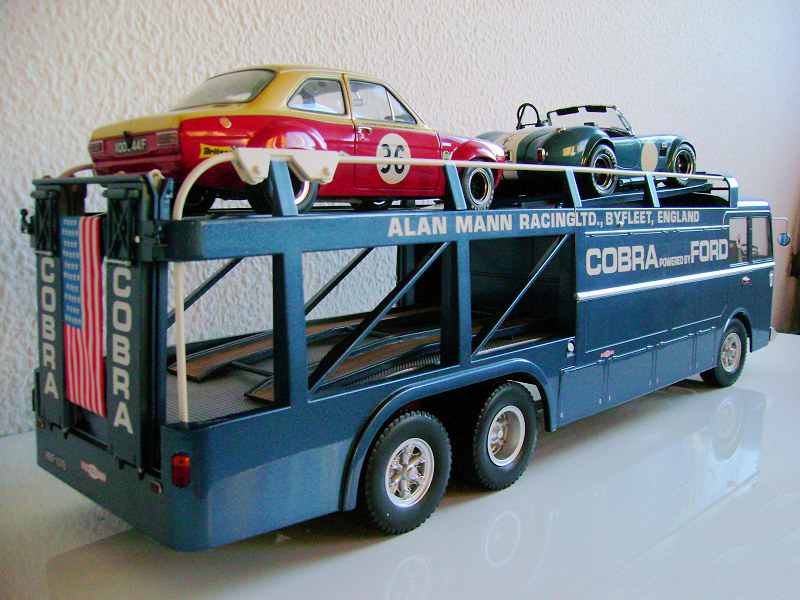 Well, not all of it. The metallic blue paint job on the truck is really good, with some of the script painted on, others just a sticker.  I actually do not mind that you cannot open the doors as there is so much glass that you will be given enough insight into the spartan cabin with its bunk beds and simple driver controls. The truck wasn´t exactly rocket science/witchcraft. What is more important is that you can operate the back of the truck. You can lower and unfold the rear ramp planks by way of unhooking the two plastic hooks and open the two plastic supports at the plank´s hinging points. The same is true for the carrier´s upper deck, albeit much less realistically. A metal cross beam holds it up and can be fiddled to the lower deck and further plastic parts can be flipped down to bridge the gap between this second ramp and the front parking space on the upper deck. The planks themselves are all plastic, but the wood replication on it is superb. I have seen worse on upmarket models in attempts to recreate interior veneer. The American flag on the rear convinces by being made of cloth. 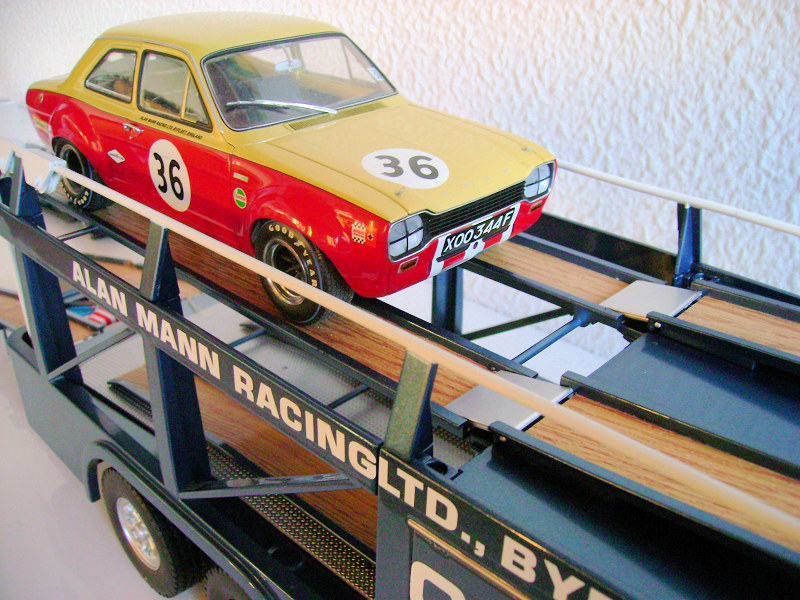 Unlike CMC´s version, Norev´s car carrier is not the best model in itself or worth being added to your collection in its own right. You might argue, that putting Ferraris onto CMC´s carrier shamefully distracts from the excellence of CMC´s Bartoletti. What the Norev does well, though, provides a stage, a nice way to display your Ford or Cobra car models without stealing too much attention from them. Especially, of course, the Alan Mann Racing cars, like the Escort in my pictures can be presented on it and for proud owners of Exoto Gt40s in Alan Mann Racing livery, I´d consider this is a must.