For a long time, the W220 Mercedes S-Class was only available in 1:18 by Maisto and in the Pullman stretch-limo version by Sunstar. Norev being the officially appointed Mercedes dealership model manufacturer diligently covering the brands’ history has now cared to make the first W220 in 15 years and bring it up to a somewhat improved standard over the above two.

What we have here is the dealer edition S600 in obsidian black pre-MoPf (MoPf being the abbreviation for “Modell-Pflege”, the German term Mercedes uses for “facelift”) built from 2000 to 2005 as the box correctly informs us. It´s sold as a dealership edition in cubanite silver, too, but that is plainly inaccurate because this colour option did not exist for the pre-facelift. Unfortunately, this foreshadows a couple of other things Norev gets mixed up with the W220. 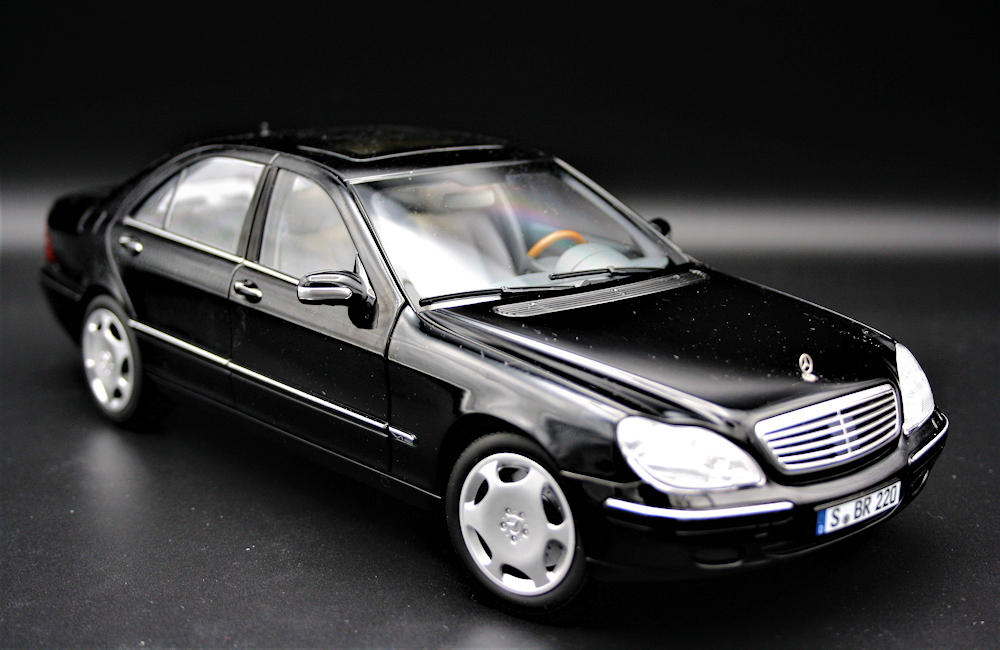 What is accurately correct with our example here is first of all the size: The S600 was only delivered as an extended-wheel-base version and the vehicle´s length has accurately been scaled down to 1:18. Front and rear lights correctly and nicely replicate the original pre-facelift design, the MoPf- headlights would have a clear lens, the taillights thin clear horizontal stripes instead of these more pronouncedly alternately red and white layers. For the hood, you don´t receive one, but two delicate photo-etched metal Mercedes star ornaments in a little plastic bag. 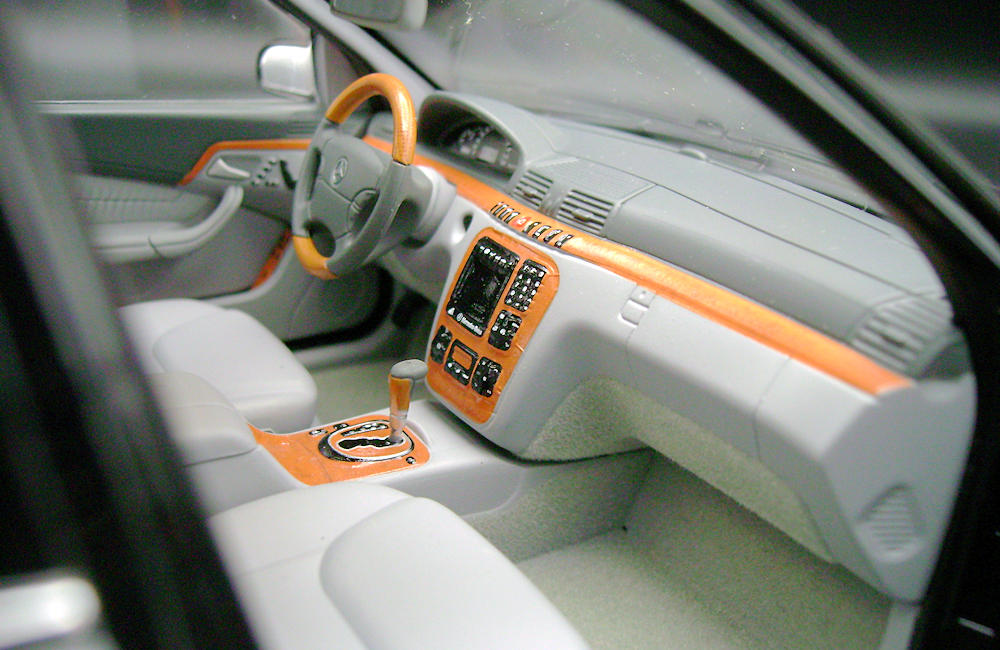 The interior, too, is correctly modelled on the initial design, with the big plastic buttons inserted into the wood veneer above the centre console. The grey trim is period-correct including real carpeting. The light grey reveals that the air vents lack depth and we have seen more convincing wood-veneer-imitation. These here are decals, clearly visible from minute folds ironed into some edges during application. Norev has not forgotten fabric seat belts and locks, but we have clearly seen better efforts from them before. 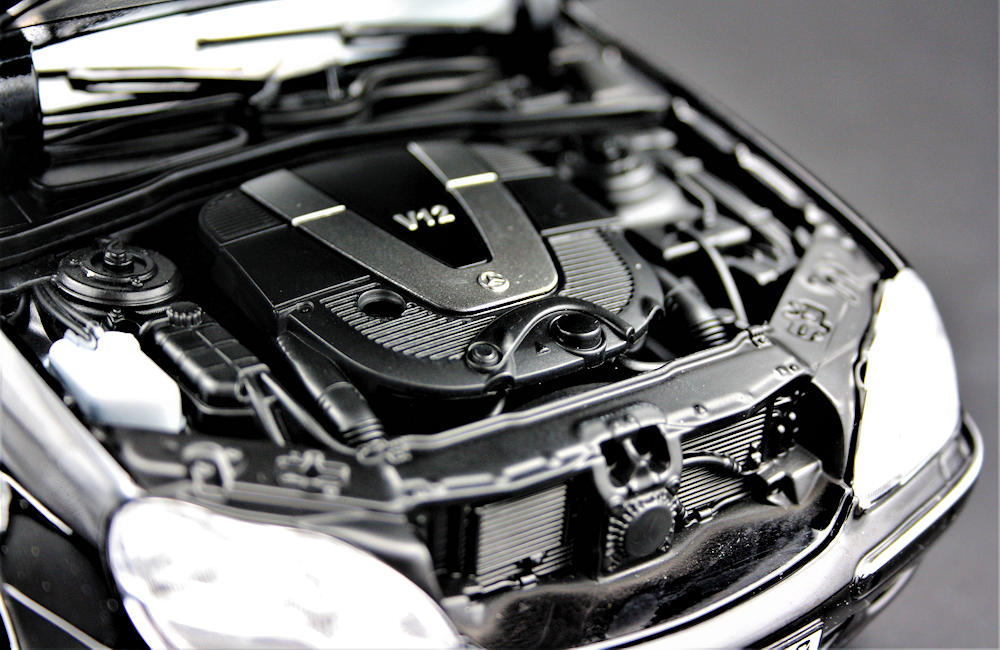 A V12 badge on the fenders along with the chrome trim just forward of the doors hints towards what is to be expected of an S600 under the hood. When you open it you do find a V12 engine cover (and sadly very little other detail), but it´s the bi-turbo V12 of the past 2005 facelift. 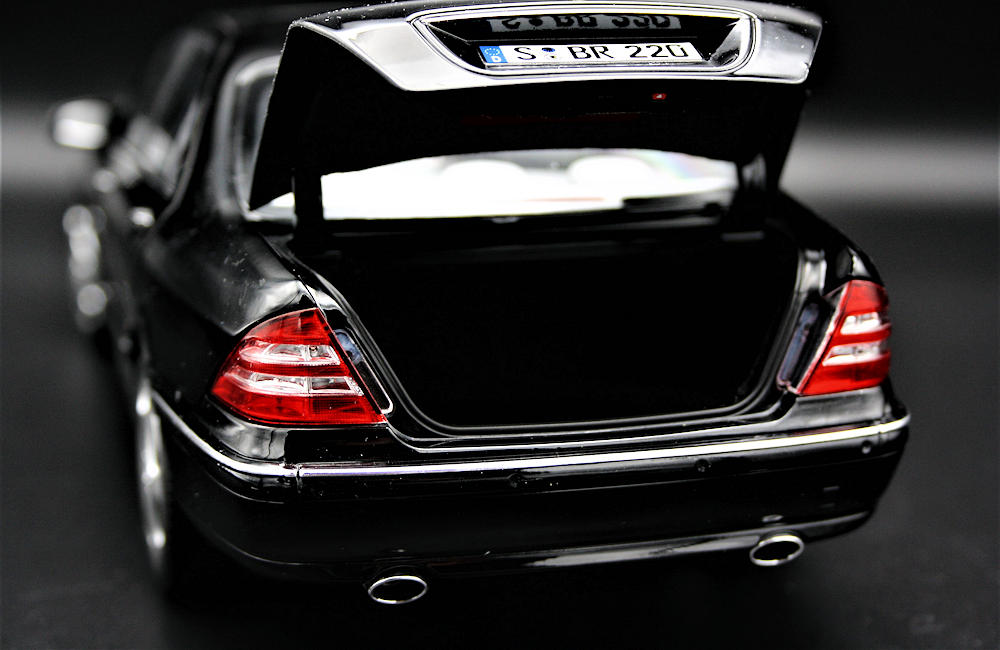 Moving around aft, you can open a carpeted trunk lid, featuring a red electric closing button as a nice detail. The lid itself has all the chrome trim including the star, but no other badging like the S600 script. This is because Norev offers other S-Class versions in the hobby edition, including not just other colours, but an AMG S55 version that differs from this model in correctly having the V8 engine under the hood, its own sportier front splitter and AMG wheels instead of the rims correctly displayed by this S600 – but then incorrectly keeps the same V12 badges on the fenders. 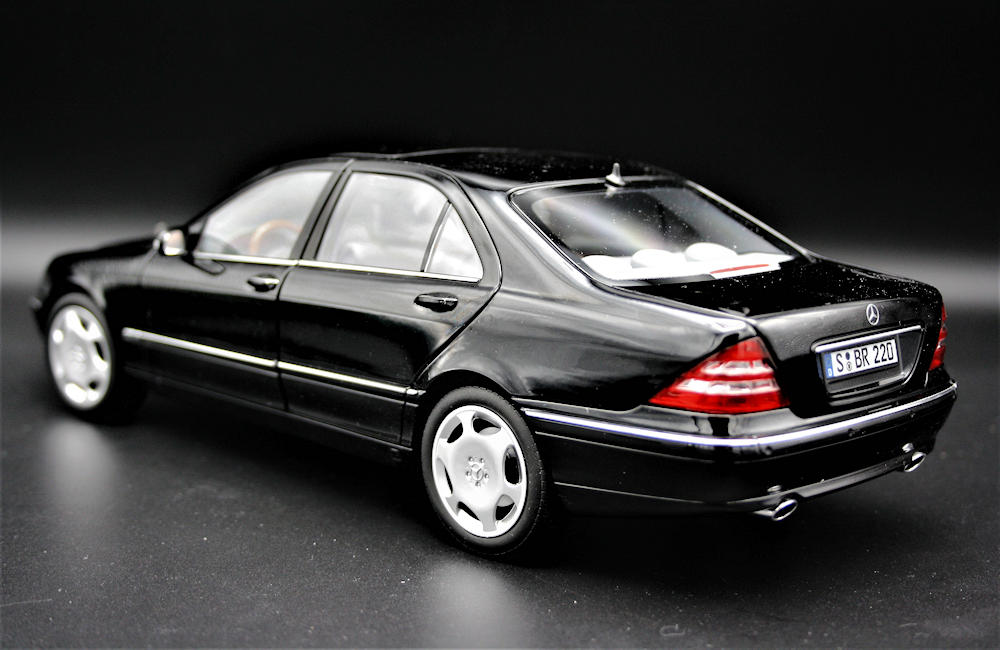 Norev´s familiar policy to make the most of one and the same mould and add different parts to it or just omit badges to more flexibly represent different versions of the same car fails here: None of the available models is a 100%-correct W220, with some detail always wrong. It honestly seems a little careless of them.  Not exactly what we expect to recommend it for the Model of the Year Award.