The latest review comes from AUTOart, we have the 1:18 Ford Mustang Shelby GT350R in exterior colour Lighting Blue with Black Stripes/Red pin stripping.  If you aren’t in the know this is the race variant of the popular new generation Ford Mustang GT.  This car is race ready and extremely capable on street or track.  The GT350R features specific body kit – carbon fibre rear wing and front chin spoiler.  Active suspension and carbon wheels round out the major difference from the sister car GT350. The high revving, naturally aspirated V8 pumps out over 525 horsepower; if you haven’t listened to this car at wide open throttle do yourself a favour and Google a video or two…  Don’t forget to turn up the volume!!! 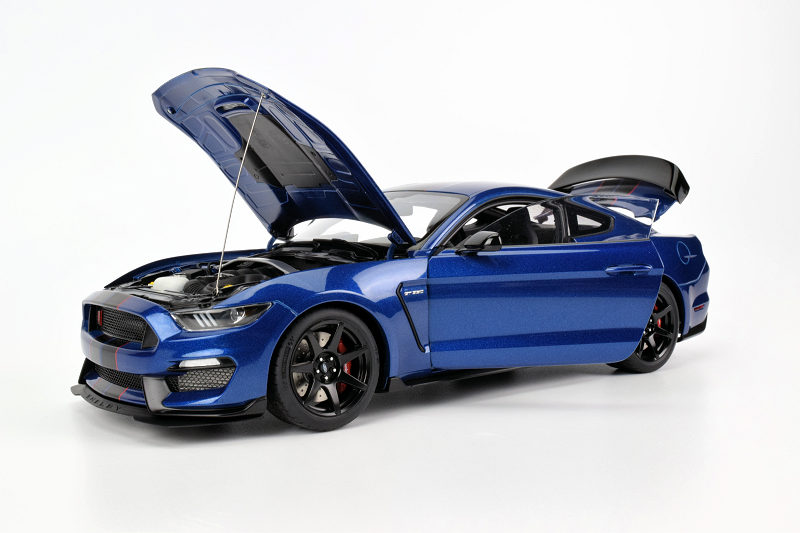 Out of the box, the Lighting Blue paint is a little darker than we first imagined.  Not that it the paint is wrong; based on images we reviewed it is quite accurate, but if we’re honest we prefer the lighter shade of Liquid Blue which was the feature colour on GT Spirit version of the same model (we still consider GT Spirit’s version one of the best scale models within their entire portfolio). 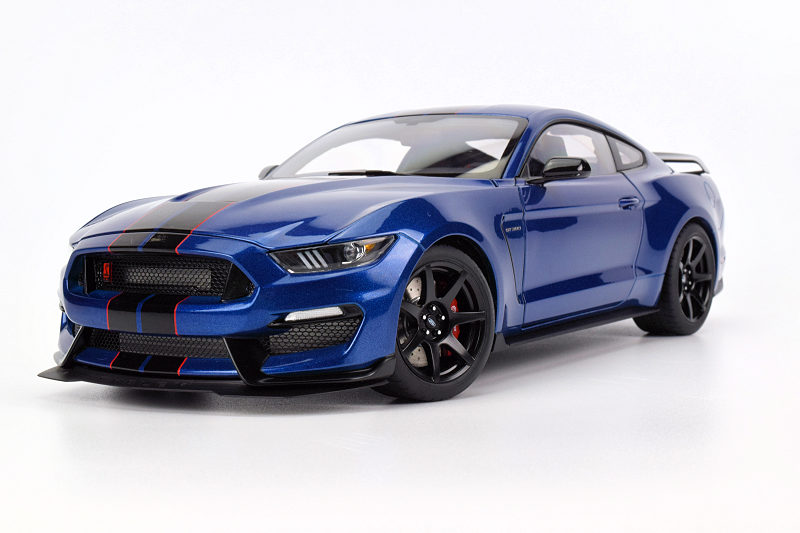 Bodylines lines of the GT350R is well executed from all angles.  Props to AUTOart for replicating the overall design and smallest of styling cues from the side, hood and roof line.  As for panel gaps and shutlines, they are exceptional.  So good in fact there are better than the real thing.  I would know, I’ve seen this car in the flesh many times a close friend owns one.  However, it is comical how an $80,000+ vehicle leaves the factory with less than desirable panel gaps.  I guess exceptions are made for “Made in America”, and surely the V8 makes up for some of the shorting comings. 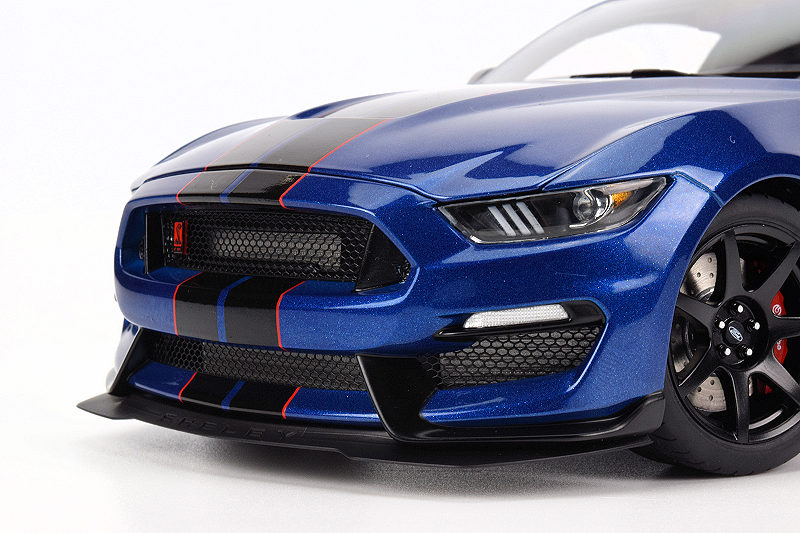 The front is very aggressive, to say the least.  Red Cobra badge is present as it should be for “R” version car.  All openings are nicely formed and completed with perforated metal grilles.  Even in behind you’ll notice some of the hidden details.  Well done AUTOart.  If there was one minor issue, we don’t see any amber colour in the lower turn indicators. 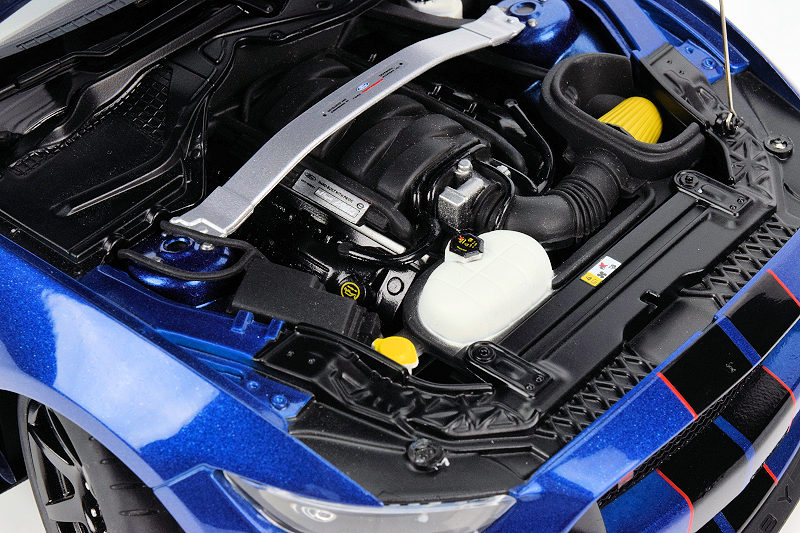 Access to the monster under the hood is permitted here.  Having 360 access versus a static representation was the major reason for the sale of the GT Spirit example.  Hood operation is flawless and true to form with two hinges doing the leg work.  Yes, this $80,000 car doesn’t ship with strut supports LOL.  AUTOart does provide a hood prop for added realism, and it works too!  Note the cooling inlet/opening on the top section of the hood, it is executed with perforated metal (see photos below). 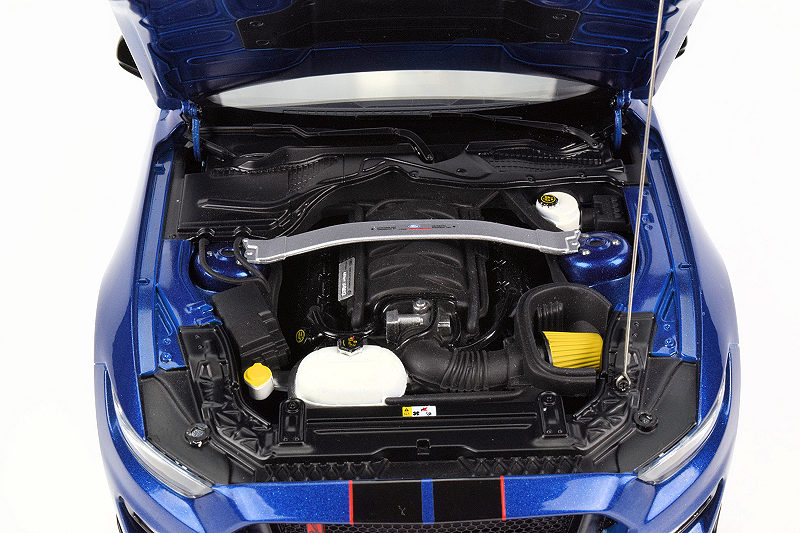 As for the motor, above average at best.  AUTOart can definitely do better, we’ve seen it in past releases.  Most of the elements are defined but the look is slightly plastic-like in appearance.   It seems AUTOart has placed less weight on overall motor execution as of late.  We’ll let you judge the motor based on the photos provided.  More below! 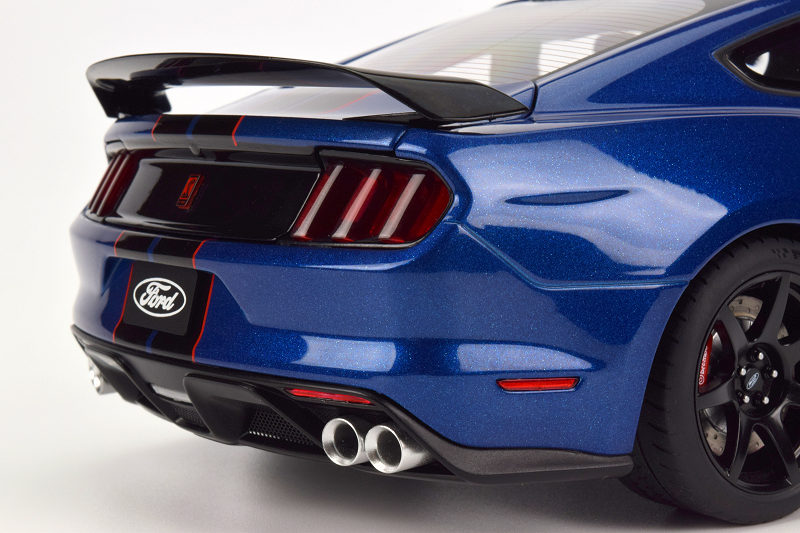 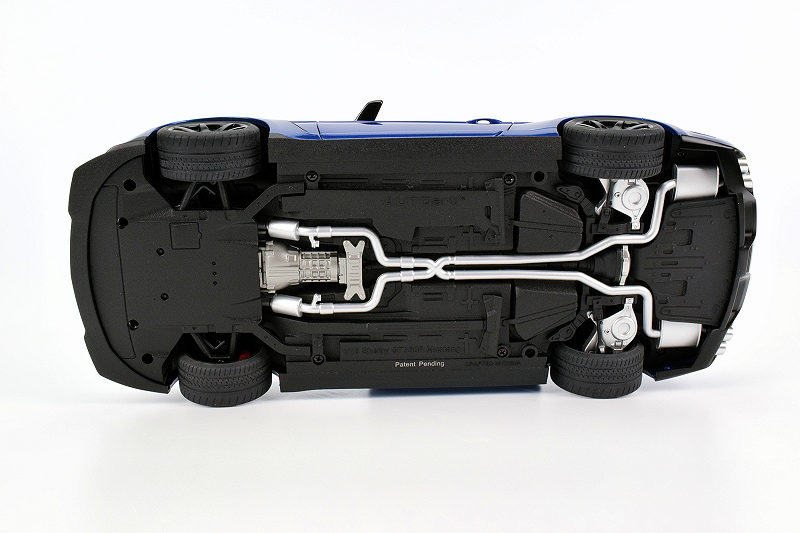 I can hear the roaring V8 rubble through the quad tips in the rear.  AUTOart does a great job executing the exhaust system.  Take note, the undercarriage here represents a true V8 GT350/R while GT Spirit does not.  The rest of the rear is given high marks.  Nice work perforated metal grilles in the lower bumper section. 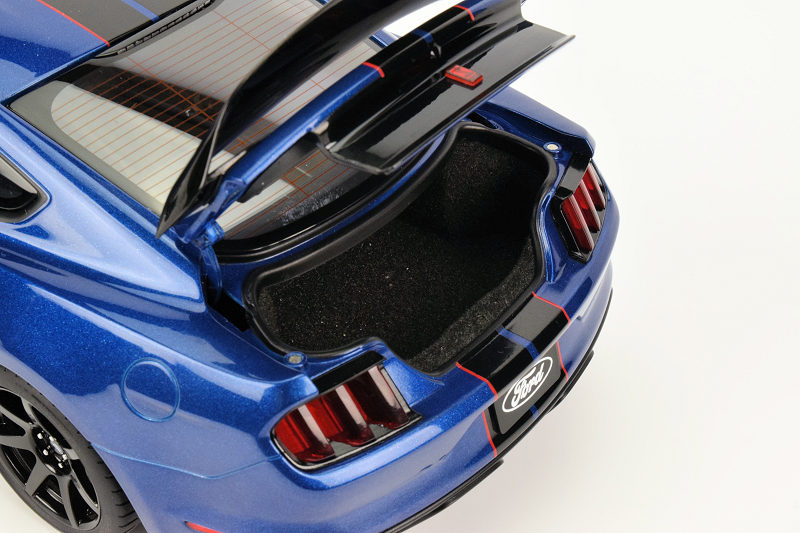 Same as the front the rear storage is accessible.  Operation is flawless, and the interior lining is fully carpeted which amps the realism factor. 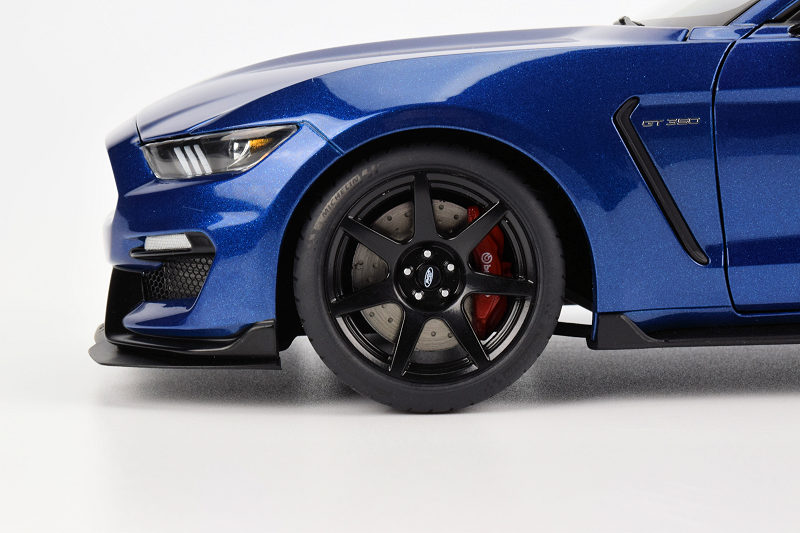 Wheels on the GT350R are quality pieces.  The tires also provide Michelin scripting. The brake discs, especially the centre element of the rotors are loaded with detail.  The Red massive Brembo rotors complete the package front and rear.  We need to note the wheels are painted in a Gloss Black finish, factor option we assume which negatives the carbon fibre weave. 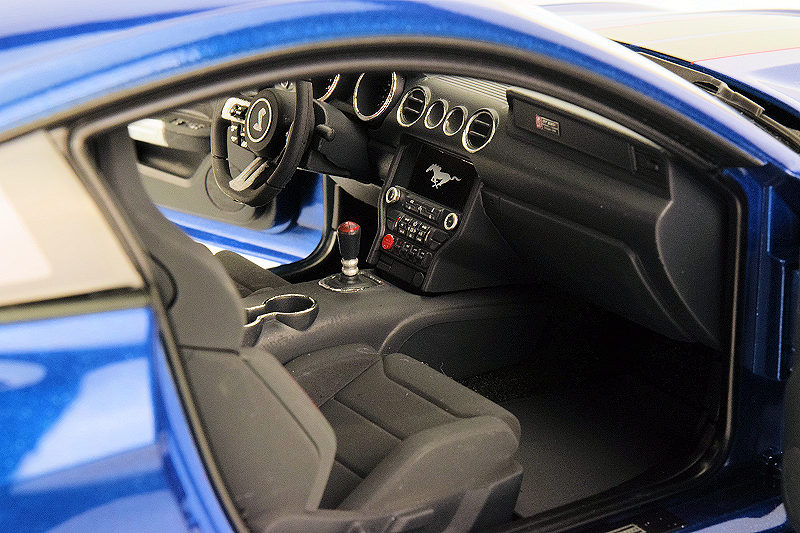 As for the interior, the GT350R is equipped with manual shifter and Recaro seats.  As for the shifter, the top is painted entirely red, this is not truly accurate.  As for the seats, AUTOart does try to mimic the texture of the original but it falls short.  Also, the dash gauges for oil temp and pressure are there, but no internal detailing is shown to recreate the dials. 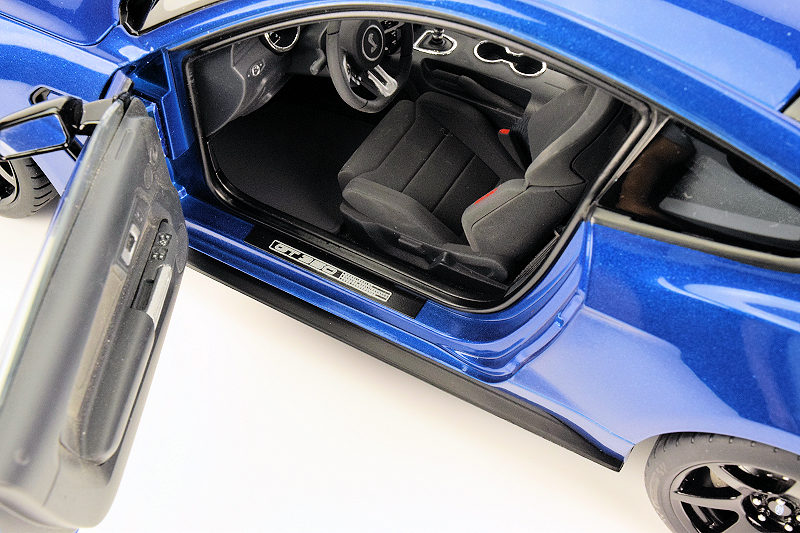 It isn’t all bad!  Overall AUTOart does a decent job with the complete interior on a whole.  Door cards, dash, centre console and more are for the most part complete.  It just falls somewhat short based on their earlier examples.  Full carpeted is found throughout.  The rear finds the same minus the rear seating. 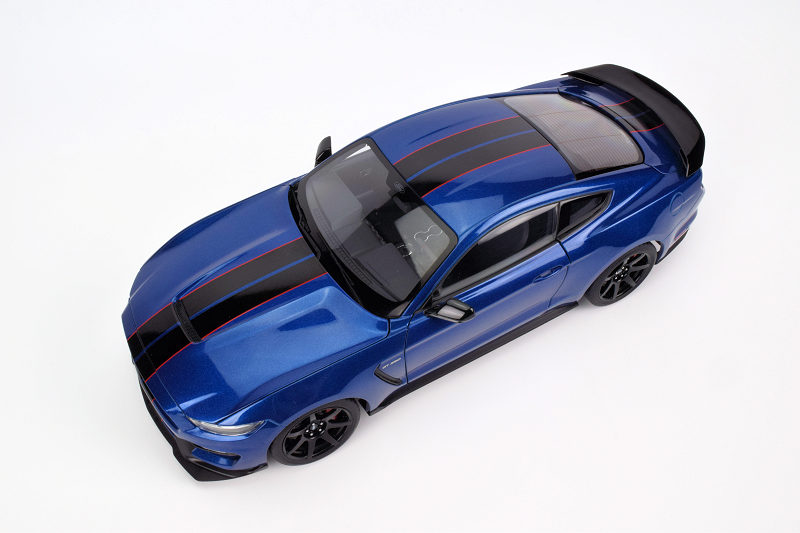 The Ford Mustang Shelby GT350R by AUTOart will appeal to many inside and outside this great hobby.  That is a good thing,  What isn’t so great is getting one in your favourite colour; most likely the causal collectors biggest challenge.  As for overall execution, we give this replica a strong B+.  The model executes the exterior savoy quite well.  Quality paint, perforated grilles throughout and last but not least full access to various internal bits.  Some of the shortcomings are minor, a few more dollars within the engine compartment and interior could have yielded a higher rating, possibly a solid A+.  We still think this one is a winner, and clear winner over its static reveal.  Enjoy the pics!